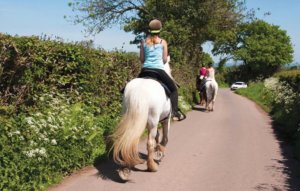 When Island Roads were successful bidders for the Highways PFI Contract the Island equestrian community were confronted with an additional hazard of extremely slippery road surfaces where metal horse shoes had no traction.

The Horse Community Facebook page was full of reports of how horses and ponies were slipping and sliding around, and the IW Bridleways Group launched a campaign of letter writing and emailing Island Roads and the IW Council, alerting them to the potentially high risks. Island MP Andrew Turner was informed of the situation.

It was soon established that the surfacing material being laid by Island Roads was a type of Stone Mastic Asphalt (SMA). Some years ago SMA had been highlighted nationally as a problematic surface material for horses and ponies. The British Horse Society engaged the services of the then County Surveyors Society and in 2006 they launched an Advisory Document for Highway Authorities. It recommended quartzite grit be rolled into the hot surfacing material being laid to improve the surface for equestrians.

Island Roads carried out a gritting trial and the surface was ridden over by a group of horses and ponies with their shoes at different stages of wear. The results were not very conclusive apart from it was clear that a newly shod horse with road studs in all four shoes didn’t slide. Unfortunately, within a few weeks horse shoes wear down.

It has now been established that the newly laid material ‘wears in’ over a few weeks, if there is a good flow of traffic. But in rural locations where there is not enough traffic flow to wear in the surface, it will take longer before the road surface is safe for equestrians.  IW Bridleways Group is continuing to discuss the ongoing problem with Island Roads and hopefully strategies can be put in place which will assist Island equestrians in coping with the situation.