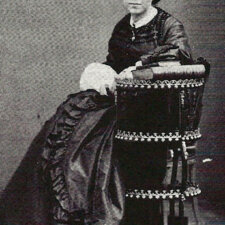 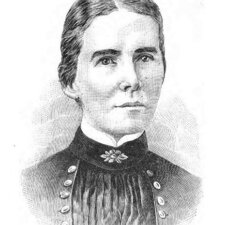 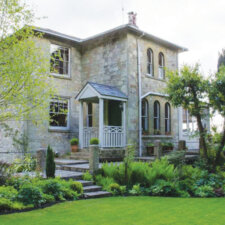 The Island is rightly proud of its association with poets Alfred Tennyson and Algernon Swinburne, but a host of lesser-known Victorian writers also loved the Island and celebrated its unique scenery and culture. Amongst them are three talented women: Elizabeth Missing Sewell, Anne Thackeray Ritchie, and Mary Gleed Tuttiett (who wrote as Maxwell Grey).

Born in Newport in 1815, Elizabeth Sewell spent all her 91 years on the Island. She never married, but supported members of her extended family and helped local schools by writing a series of popular and influential novels, as well as educational non-fiction.

Her autobiography vividly describes the Island of her girlhood, when ‘Newport was in all respects the capital of the Island. Ryde was scarcely in existence then. I can remember when it had only one straggling street. Ventnor consisted of two or three thatched cottages, a small hotel ‘The Crab and Lobster’ and a boarding house, but there was no church.’ 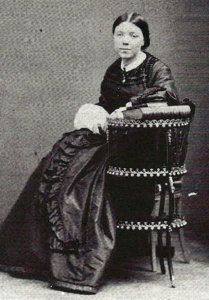 She added that the great social event of the year was the costumed Archery Ball, held at Carisbrooke Castle after a ladies’ archery competition on the green. For many years Elizabeth’s home was at Ashcliff, a house in Bonchurch. She was hugely influential in the village, providing a school for the inhabitants and playing the organ at the new church, built in 1847. At a time when secondary school education for girls was still controversial, Elizabeth was a pioneer, founding St Boniface Diocesan School in Ventnor.

A more cosmopolitan figure than Elizabeth Sewell, Anne Thackeray Ritchie was a daughter of novelist William Makepeace Thackeray. The sparklng wit of work such as Vanity Fair hid the tragedy of Thackeray’s personal life, for his wife Isabella suffered permanent mental illness, making him all the more devoted to his two daughters. When Anny, as she was always called, became unwell in 1861, Thackeray sent her to stay with his friend Julia Margaret Cameron at Freshwater: photographer Mrs Cameron evidently knew everyone who mattered in Victorian England! This was the beginning of Anny’s love affair with the Island. On her very first visit she made friends with Tennyson, who was there to console the Thackeray girls when their father died two years later. Anny revelled in the lively, eccentric Cameron household. ‘Everybody is either a genius, or a poet, or a painter or peculiar in some way..is there nobody common-place?’ she exclaimed.

Cuisine was not a priority, and guests ate eggs and bacon for every meal, but said Anny, ‘ I cannot tell you how much we enjoy it all. Of a morning the sun comes blazing so cheerfully, and the sea sparkles, and there is a far away hill all green, and a cottage which takes away ones breath it looks so pretty in the morning mists.’

Becoming an established writer, Anny commemorated the atmosphere of Dimbola in her novella ‘From an Island.’ The one hundred pages of this short work set in the Yarmouth/Freshwater area include brilliantly atmospheric descriptions of Island scenery as well as a lively account of three pairs of lovers. In 1874, Anny purchased a cottage named The Porch from the Camerons, and after her marriage to her cousin Richmond Ritchie it was her family home until her death in 1919. 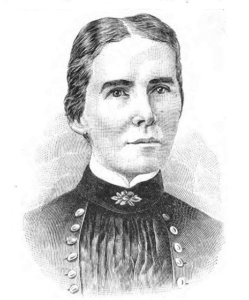 Like Elizabeth Sewell, Mary Gleed Tuttiett was born in Newport, where she lived until 1895. Despite poor health she was a strong supporter of women’s rights, which made important progress during her lifetime of 1846 to 1923. And although disabling rheumatism and asthma limited her writing time to a daily two or three hours, she was a prolific author of poetry and fiction, including short stories and science fiction. Many of her works have Island settings or themes, and this is especially true of her sensational 1886 success, ‘The Silence of Dean Maitland’, in which Calbourne is fictionalised as Malbourne, Newport is thinly disguised as Oldport, while Swainstone appears as Swaynestone, and an exciting prison breakout is set in Portsmouth. Briefly, the story concerns a talented young clergymen who seduces a village girl and kills her father, leaving his best friend to take the rap. Reviewers praised the dramatic incidents, powerful character delineation and superb descriptions of Island scenery. As the novel was published under the name ‘Maxwell Gray’ there was wild speculation as to the author’s identity, but when it became known, an impressed Tennyson drove to Newport to meet Mary Tuttiett: she was too unwell to travel to his home in Freshwater. The tale was subsequently adapted as a successful stage play, with three film versions.

Maxwell Gray is rarely heard of today and Elizabeth Sewell’s novels have probably not stood the test of time, although Anne Thackeray Ritchie’s connection with her famous step-niece Virginia Woolf has made her more widely known. Yet all three women loved the Island and have left vivid memories of its Victorian past.