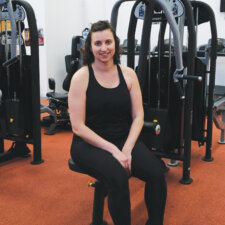 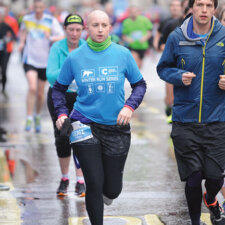 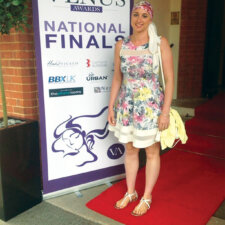 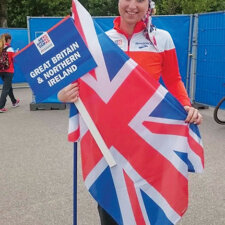 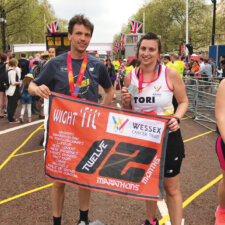 She has faced more major life challenges in her 29 years than most people can expect in a lifetime, but award-winning Newport gym owner Victoria Coles seems to possess an incredible reserve of courage and strength when it comes to meeting life’s battles head-on.

Currently, she’s set herself the herculean challenge of completing 12 marathons in 12 months:  a tall order for anyone, but Victoria has taken it on to raise funds for Wessex Cancer Trust, the charity that has been a lifeline for her since her cancer diagnosis in 2015.  Here she tells Jackie McCarrick what it is that drives her.

She laughs wryly as she describes the 12-marathon challenge as “crazy and stupid” – but one of the reasons why Victoria says she is doing this is to support the other cancer patients who have become her friends during her own difficult healing journey.

“You become part of a club that you would never have wanted to join” she explains.

“I’ve lost four friends over two years, and have two others of around my own age with more advanced cancers – they’re the ones who keep me going.

“My attitude is that I’ll keep on doing crazy stuff for them”.

The marathon-a-month idea came about last year when Victoria and her brother Anthony, a personal trainer and ski instructor, were on the train back from London following the 2017 London Marathon, which she was doing in aid of Wessex Cancer.

Ironically, Victoria was at such a low point after the physical ordeal, that she admits “I didn’t want to face it ever again”  In fact, she posted as much on Facebook.

Having completed the first two-thirds of the run with a huge smile on her face, after 17.5 miles, she had what she describes as “a full-on breakdown” and wanted to stop – although typically, she carried on walking to the finish line.

So what changed her mind and set her bravely back on the marathon trail?  Largely, the encouragement of her ever-supportive older brother.

Anthony suggested that he take on the marathon challenge and she could do it with him – and that made all the difference.

January 2018 marked the first of their 12 runs, and because of torrential rain, they did it indoors, on the treadmill at her Wight Fit gym.  Some of the others will be in Belgium, where Anthony now lives, and others in the south of England.

“Having him do the marathon challenge with me is brilliant” she says. “He can run really fast – I can’t.  Basically, he’s my wing man, and I’d be lost without that bond”.

The brother-sister bond has always been especially strong, largely because of an unimaginable tragedy that had hit the family before Victoria was even born.   Their father was killed in a car accident when her mother was pregnant with her, and Anthony was just four years old. 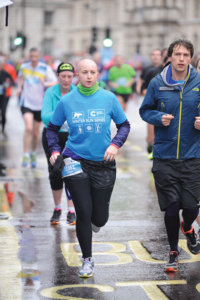 Ten years later, their devoted mum Gill decided to move the family from their home in Hereford and begin a new life on the Isle of Wight, where they had regularly enjoyed holidays.

“We loved living in Bembridge, with the beach on our doorstep, and I guess we became a very tight-knit little family unit.” says Victoria.

Schooldays for her were unfortunately not quite so idyllic – in fact she suffered badly from relentless bullying, and at the age of 13 switched to a school on the mainland, St John’s College in Southsea.

Once there, she clearly thrived and ultimately went on to be Head Girl.  In fact she reckons the bullying experience and then the daily commute to a new school proved to be positive in making her grow up pretty quickly.

Both she and Anthony had always excelled at sport – he in rugby and cricket, and she playing netball to a high standard. In fact the netball only had to stop when she started undertaking a long daily commute from the Island to Chichester University for her degree course in Sports Therapy.

The brother and sister were regular visitors to Twickenham for the rugby, and Victoria’s aim was always to work as a rugby physiotherapist.

However, in 2010, the first of her health challenges hit her plans, when a bout of glandular fever and pneumonia forced her to take several months off from university, delaying her taking the final exams.

Sitting them later, she achieved a 2.1 Honours degree, and soon afterwards, began her first job as sports therapist for the Wightlink Raiders ice hockey team. A few months later, she set up an injury clinic in Wootton, and began building  her practice and client base and working at high profile sports events – including the 2012 Olympics, during which she spent much of her time in London.

In her leisure time, she was playing touch rugby for local teams on the mainland, as well as swimming and working out in the gym.

By 2015, she was ready for the next big step forward in her career, and in June, launched her own gym, Wight Fit: a huge achievement for a 26 year-old.  However, within 10 days of its opening, she was facing another unexpected health crisis.

With her new business less than a fortnight old, Victoria found herself in the A&E department with pain and swelling to her legs, which she assumed to be an injury from all her exercising.

Tests however revealed a deep vein thrombosis – a condition that’s more usually associated with inactivity and obesity than a super-active lifestyle – and she left the hospital on crutches, with a prescription for blood thinners. 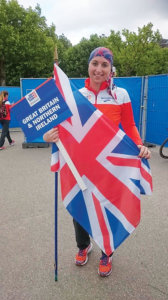 “It was an incredible shock, particularly as a fit and healthy individual” she says.

Further tests revealed a genetic blood disorder that was causing the clotting, and by October, it became apparent that Victoria had a major hormone imbalance, and had developed a breast lump.

“It was a bit of a bummer” she says with typical understatement.  “I had no idea – I hadn’t even contemplated that it could be cancer”.

“All I recall asking was the question:  ‘Is it treatable?’ – and the answer thankfully was ‘yes’.

As she contemplated undergoing the initial treatments for the cancer, Victoria was also concerned about the impact on her future ability to have children.

As the cancer was so advanced and quite aggressive, there was no time to freeze any of her eggs, so she was one of the first few patients to undergo a groundbreaking procedure at the Princess Anne Hospital in Southampton, to remove and freeze one of her ovaries for possible future use.

With the ovary safely preserved, Victoria almost immediately started on her first round of chemotherapy, which continued every three weeks for seven months.  This was followed by lumpectomy surgery, and then 25 daily sessions of radiotherapy.

During that time the team at her fledgling new gym business kept things running, with Victoria going in whenever she felt well enough.

“As long as I wasn’t putting myself at risk, I would just go and run, and it really did keep my brain going”.

Brother Anthony also kept her going:  “He’d come and make sure I stayed alive, driving me there and back” she says. “Then he’d be there with me at A&E, cracking jokes about my bald head”.

In fact Victoria, who had previously had long, dark hair, was bald for nine months, and wore pretty headscarves for part of that time – although now she says:  “Hair is just hair – I do wish I hadn’t bothered with the scarf, and just embraced my baldness”.

She recalls being laughed at by a group of teenagers in Tesco’s when she went out wearing her trademark headscarf – but not surprisingly she lashed out and “gave them what for” about it!

She also recalls attending a business awards dinner (at which she won one of her several awards for business enterprise) minus her hair and eyebrows, but says that the photo taken of her at that occasion remains one of her favourites.

As she says, hair is just hair and it grows back – but some of the other effects of her cancer treatment are longer-lasting. 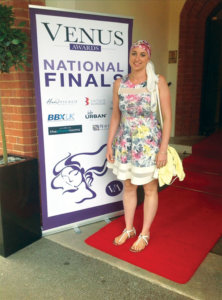 “It’s messed up my body” she says, describing serious after-effects such as her “dodgy heart, osteopenia, weight gain and early menopause”, as well as now being dependant on an array of  medications.

However, she still nurtures the hope that she will be able to have children – even if it has to be achieved ‘a longer way around’ than for most people.

If it comes to it and she isn’t in a relationship, she says she’s even prepared to undergo IVF and go it alone to have a child.  Twins, she says, would be the ideal!

Meanwhile, the main focus is keeping herself as healthy as possible, while building her business and raising funds for the cancer charity.

Focusing on her £5,000 target for Wessex Cancer Trust by doing the marathons and other fund-raisers is one way of putting her mind in another zone.  Some of the marathons will be in Belgium near Anthony’s Brussels home, and others in Portsmouth, Dorset, and Kent.

Around those, Victoria finds mental escape by jumping on a spin bike at the gym and working out to ‘cheesy music’.  Or she simply walks on the beach.

Looking to the future, she says:  “I want to have a long life and enjoy every single moment of it.

My mantra is ‘carpe diem’ (seize the day) and I believe that if you don’t like something, then go and change it.

“I think this whole experience has made me more intolerant of people moaning about stupid stuff.

When you’ve had your whole life turned upside down, hearing people moan about mismatched socks or whatever tends to wind you up.

“People should enjoy what they’ve got, because it’s too easy to throw it away.”