Pip Smith: Up for the challenge: Pip’s life in and out of the saddle

Home|Equestrian, Interviews|Pip Smith: Up for the challenge: Pip’s life in and out of the saddle
Previous Next

Pip Smith: Up for the challenge: Pip’s life in and out of the saddle 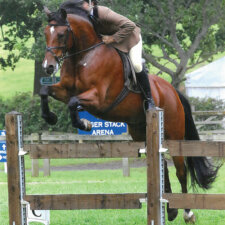 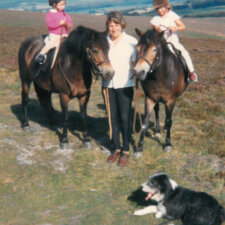 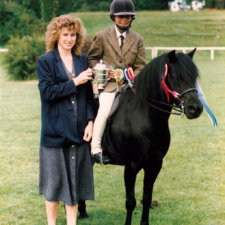 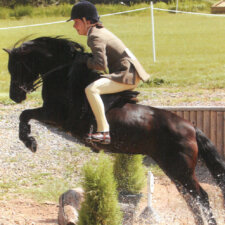 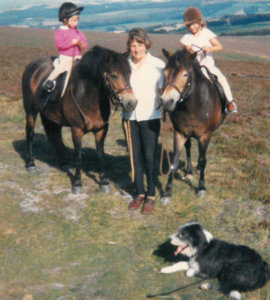 She’s always been a girl who relishes a challenge – so it’s little wonder that Pip Smith has ended up working in what’s arguably one of the toughest areas of the equestrian world:  breaking in raw  ponies before they go off to their new owners.

During the 6-8 weeks that the ponies spend with her, Pip takes her time getting to know their unique characteristics, ‘listens’ to their individual needs – and at the end of the process, has the satisfaction of sending them off happy to start their life with a new young rider.

“Some can be more difficult to crack than others” she admits, “but it’s a case of learning how to get into their brain and discover how to get the best out of them – just like you would with young children in a nursery, really”.

Pip, a 35 year-old mum-of-two, happily admits to being horse-obsessed from an early age.  In fact, she says she started riding almost before she was able to walk.

She came to the Island in the mid-1980s with her farm-owning parents and two sisters, when she was just a toddler, and recalls:  “From a really young age we were pretty much put on ponies because it was probably easier for mum than walking us about!”.

Her mum Ann had always had horses, and when the family moved to the Island she’d decided to buy some rare breed Exmoor ponies.

Though notoriously difficult to ride, the Smith girls nevertheless saddled the feisty ponies up and took on the challenge.

“The Exmoors would regularly throw us off and trundle back to the local riding school without us” laughs Pip.  “It could take hours to catch them, but we discovered that they were good at hunting.”

Of course it was also a test of Pip’s mettle, and one that would prove invaluable later in her working life.

Eventually Pip and her sisters Jenny and Sally went off to Pony Club, where they threw themselves into the more conventional and fun side of riding.  But by the age of just six, Pip was already showing more competitive tendencies and started riding at shows for her mum’s friend Jenny Hillyard, a breeder of Dartmoor ponies.

Pip’s first significant success was on Blackbridge Wild Poppy, with a Reserve Supreme title in the Breed Show at Dartmoor and a place at the NPS Championships.

As her life became more and more taken up with riding, it was no surprise to anyone that Pip wanted to leave school and get straight into the equestrian world full time.  Her careers teacher gloomily told her there was no future in it and advised finding “a proper job” – but Pip set about proving the teacher wrong when she landed a job in Ireland, at an Eventing yard in Tipperary.

In her early 20s, Pip qualified for Horse of the Year Show with the daughter of Blackbridge Wild Poppy – Blackbridge Sweet Pea – who qualified in the Mountain and Moorland Working Hunter Pony category.

She qualified for Horse of the Year again in 2006, on Nick Williams’ New Forest Stallion, Perrone Palaver and was thrilled to be placed 8th in the Show final. 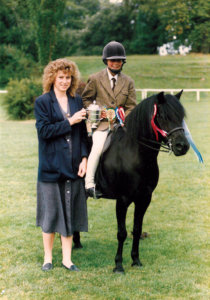 Nowadays, Pip has a couple of her own horses that she shows, as well as breaking in native mountain and moorland ones for other owners.  She can have as many as seven horses at a time for breaking – and as if that weren’t enough to keep her busy, last year she also launched her own horse transporting business that takes her off all over the UK, from Sussex to Wales and Shropshire to the Channel Islands.

But she will always make time for the equine love of her life – a seven year-old pony that she bought as a three year-old, Willoway Ice Prince.

“He is my own and I absolutely adore him” she says.  “In fact I don’t think I’ve ever had a horse that I love so much.”

As well as being a great pet and characterful companion, Carrot (as he’s known in the stable for his orangey hue) has also proved a great performer.

She also takes him Eventing, and he did his first BE90 Open last year and came in fourth at Munstead, qualifying him for a regional final.

So how does the Calbourne-based mum of two sons manage to fit it all in?

She pays tribute to her mum  Ann, who she credits as being an invaluable backbone to the business:  “Poor mum is like my unpaid staff – she’s amazing, and does everything from cooking for us to mucking out.” 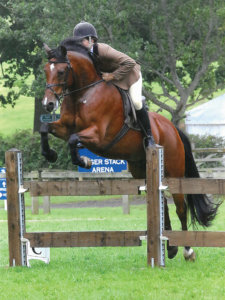 Pip also credits her other half, Matthew, who she says, “tends to do a lot of the running of the home, so that I don’t have to”, and the continuing help from Jenny Hillyard.

“It’s all a team effort and I count myself really lucky to have these people around me” she says.

Pip is also now enjoying nurturing a young protégé, 12 year-old Georgia Ellsworth, who has begun riding a couple of the ponies Pip has in for breaking.

There are also plans for Georgia to ride a grey Connemara show pony called King Bob, for owners Pip and her mother, at the South of England Show in June and perhaps also in Horse of the Year qualifiers.

“It’s really nice to be mentoring a youngster” says Pip.

But then, for her, nurturing raw young talent has become pretty much a way of life.