Under orders! Island horse racing stretches back to 1845

Home|Equestrian|Under orders! Island horse racing stretches back to 1845
Previous Next

Under orders! Island horse racing stretches back to 1845

Each year thousands of enthusiasts flock to West Ashey Farm, Ryde for the eagerly awaited IW Grand National and the Ashey Scurry.  Unfortunately for Island race-goers it is one of the few opportunities to savour the excitement of the Sport of Kings without having to travel to the mainland.

The Ashey Scurry in its current form was resurrected 20 years ago, although horse racing was taking place on the Island during the middle of the 19th century, organised predominantly by the Isle of Wight Hunt after its establishment in 1845.

The history of racing on the Island has proved a huge fascination for many, including well known Island farmer Howard Johnson, himself a keen rider and winner of the prestigious IW Hunt Cup when it was staged near Aldershot back in 1978.

Howard, with the help of other enthusiasts including retired solicitor Tony Gale, has complied a detailed account of racing on the Island since the 19th century, although Howard firmly believes it could well have been staged here as long ago as Roman times.

He said: “Point-to-point racing actually went off the Island in the 1950s because it became too expensive for people to bring their horses over from the mainland, so we had to go over there. There is a big difference of course between amateur racing which is point-to-point, and professional racing, that was once held at Ashey. Point-to-point horses had to qualify for their races by being seen out hunting with the local Hunt.

“After reading the book about the great Island horse ‘Warrior’, who went all through the fighting in the First World War and later won the IW Point-to-Point in 1922, it inspired me to have a go at winning the IW Hunt Cup. After that I began researching horse racing, and that is how the book on Island horse racing came about.”

The book is packed with fascinating photographs, some of which we publish with this article, courtesy of Howard. It was mostly compiled in the year after he won the IW Hunt Cup, but has been subsequently added to many times.

So here is the condensed version of Island horseracing history:

There were steeplechases, hurdle races and occasional flat races, with racing taking place on courses laid out at Gatcombe and later at Appleford. These races continued until 1881.

Another Island group interested in the sport of horse racing was the County and Castle Club at Ventnor. It was essentially a social club with premises in Belgrave Road, Ventnor, founded in 1875. It is reported that ‘the great and the good of the Island’ were members of the Club, and races were held on Rew Down overlooking Wroxall.

It has not been possible to establish how the course at Ashey was acquired from the owner of West Ashey Farm. In 1881 Mr George Young, who had made a fortune as a Corn Factor in London before coming to the Island, owned the farm. Young had seen his fortune erode, and it may have been a reason for him to agree to lease the fields. The presence of the railway with its station would have been an important factor in deciding to try and establish a course at Ashey, with the added benefit of easy transport of both horses and spectators to the course. 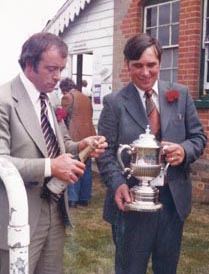 A large number of the participating horses came from the mainland on barges towed from Portsmouth to Horse Boat Slip at Ryde and were stabled in Ryde until taken by train to Ashey Station.

The first Hunt and County and Castle Club meetings at Ashey took place in 1883, held under Grand National Hunt Rules and called ‘The United Isle of Wight Race Meetings’. They continued until April 1900 before the Club withdrew from promotion of the Ashey Races and the Hunt took over responsibility for holding a two-day meeting, usually in the Spring.

A company named Ashey Ltd was formed and acquired the freehold of the Racecourse certainly before 1908. Four years later Ashey Ltd granted a tenancy of their land to Albert Hallett at a rent of £75 per year – this was subject to the track being clear of cattle and sheep at the time of the race meetings.

One of the features of the course was that part of the track ran behind a copse out of sight of the Grandstand and stewards – it was often stated that this was where unusual tactics occurred!

The races were soon established as a popular day out not only for the hunting fraternity but also for the ‘townies’ with well-advertised special trains being run from Ryde and Newport. The races were advertised in the local papers by the promoters as did well known mainland race course bookmakers. At that time cash betting was only lawful on the race course!

There are reports of bookies being raided and prosecuted for indulging in cash betting from premises in the Island towns but the Magistrates appear to have dealt with the miscreants very leniently.

Well-known jockeys came to the meetings with at least three champion jockeys having rides in the races. The racing continued at Ashey until the outbreak of the First World War in 1914. There was then a break until 1920. For the next decade racing was promoted on two days in May and at a second meeting in October.

In October 1921 Ashey Ltd sold the freehold of the racecourse to Leonard Brown and his sister Clara Brown, who were the then owners of West Ashey Farm. They immediately granted Ashey Ltd a lease of the ‘Ashey Racecourse’ consisting of 138 acres, for 21 years at an annual rent of £50.  The company also had the right to admit the general public on four days each year.

There were Steeplechases at Ashey on Whit Monday, 1930, and according to local records there was a large attendance. The winners’ prize money on each of the races was 70 sovereigns. The second meeting of the year was due to be held on August Bank Holiday Monday.   However, the directors of Ashey Ltd, meeting in London, were concerned that the apparently successful May meeting had in fact sustained a substantial loss.

It is recorded that during the crisis meeting in a hotel room in London a pageboy took in a telegram, gave it to the Chairman, and asked ‘any reply Sir?’. The chairman replied: “Bring Champagne!” He then told the directors the news that the Grandstand at Ashey had burnt down and it was well insured!

The lease of the course to Ashey Ltd was surrendered in 1931, but remains of the Grandstand were not removed until 1942. There was no more racing at Ashey for over 60 years.

Then in March 1992, the brainchild of local horseman Harold George with the consent and co-operation of farmer Alan Aylett, resulted in the Isle of Wight Scurry Races being established over part of the former Ashey racecourse.  These races have now become a regular feature of Island life, and long may they continue.

As for the IW Hunt Cup itself, it is made of solid silver, is very valuable, and is stored in a very safe place. Maybe it will be contested again one day, but almost certainly in a different form. As for racing on the Island, there is always the IW National and Ashey Scurry to look forward to again next year.