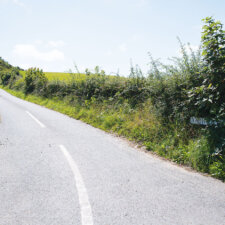 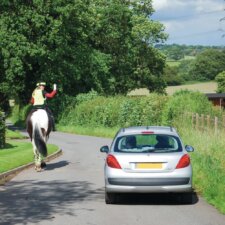 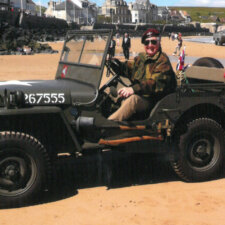 Anger, discontent and disgruntlement is brewing among the Island’s normally peace-loving horse-riding community.

Why? Well, it seems that as soon as one of our roads is re-surfaced under the new PFI contract, it’s instantly rendered virtually unusable for horses and their riders.

Whilst there may be some car drivers now jumping with joy at the prospect of horses no longer being able to use the roads, the reality is that this is a serious issue, and affects not just the horse riders, but motorists too.

The problem lies in the road surface, which is proving extremely dangerous, causing horses and their riders to continually slip and slide on roads once they’ve been re-laid. Prior to the re-surfacing work on the Island, there didn’t seem to be a problem – but now clearly it is. Horses can weigh up to a ton, so the last thing you want to happen as a rider is for the horse to slip and fall on top of you: this could almost certainly lead to serious life-threatening injuries or in extreme cases, prove fatal.

There have recently been a couple of serious incidents on the Island where this has happened, with one owner’s horse  –  Georgia Hedley-Ward’s part-bred Arab, Archie – sadly having to be put down. So, what’s the problem? It appears to lie in the type of road surface being laid by Island Roads under the instruction of the Isle of Wight Council. Although the road surface meets all the required national standards for wheeled vehicles, it seems that it fails to meet the standards when it comes to metal horseshoes.

We asked Island Roads to comment and were told:  “We were very sorry to hear of Miss Hedley-Ward’s incident and we are conducting a thorough investigation which has included a meeting with Georgia and her mother to establish the circumstances. There have been no previous reports of horses slipping at this location, which was resurfaced in October and November 2016.

“While our investigation has confirmed the skid resistance at this location is above the required level, the only industry and UK-wide standard for measuring skid resistance of carriageways is based on vehicle tyres and not a metal horseshoe. This was among issues we discussed during a Horse Forum held in 2014 in Newport, which including national and local British Horse Society representatives, the Isle of Wight Bridleway Group, the IW Council, a national expert farrier and an equine vet.

“We welcome our ongoing dialogue with the Island’s equine community and we will continue to discuss the needs of horse riders and – where practicable – take appropriate action in partnership with the Isle of Wight Council.”

However, the question that needs to be asked is, what specification was given to Island Roads by central government for resurfacing our roads within the PFI? The law clearly states that all highways must be suitable for ALL road users, including horses, motorcyclists and cyclists. Did central government take into account horse riders when deciding on the national specification for the new road surface? If not, then it’s hard to place blame at the door of Island Roads or Isle of Wight Council. 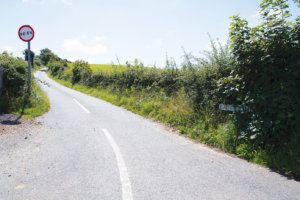 This is not a recent problem, and dates as far back as November 2014, when a forum was called by the then MP Andrew Turner, Ben Chilvers, a leading equestrian veterinary Director and Jonathon Core, an expert road pavement consultant to investigate the issue.

Jonathon Core commented at the time “All design and testing is very much geared to skid resistance of wheeled vehicles, which was also confirmed by the veterinary expert. We heard from George Batten, previous Chairman of ADEPT, and Stephen Child, co-author of guidance to Local Authorities, who advised that certain Authorities use certain surface courses and others specific alternatives, some apply a grit and some do not; but there was no definitive solution for horses during the period just after laying of asphalt – some put out warning signs and some do not. Mr Batten advised that Devon County Council have a very low number of bridle paths and have brought in a route- by-route based strategy to deal with equine risks on an area / road with close engagement with the local equine community.

“While this has not come up with a new solution, the closer working and understanding has helped reduce risks. Mr Bill Murphy, of the Isle of Wight Council, thought this was a good step forward and said he would look to develop such a strategy for the Isle of Wight using this good practice.”

Also back in November 2014, following reports of horses slipping on new roads, Trish Merrifield, Chairman of the Isle of Wight Bridleways Committee, commented that many roads don’t have verges, and that dangerous crossings often have to be negotiated. She said that since some roads have been resurfaced, there have been many reports of horses slipping, making riding on these roads hazardous.

Other representatives of the Island’s equestrian community present echoed her words, and it was conceded by both the Isle of Wight Council and Island Roads representatives that insufficient attention had been paid to their needs during the negotiation of the PFI contract.

Councillor Ian Ward, Cabinet Member for Transport and Infrastructure at Isle of Wight Council commented, “The PFI contract was awarded to us by central government and it is central government who specifies the type of road surface that is to be used when re-surfacing roads (within the contract). I believe that the surface used meets the required national standard approved by central government. So, neither Island Roads or ourselves have any say as to what type of surface is used under the contract.

As a local Council, we want to solve this problem as soon as possible, and we are looking at the options, but there is no quick solution. (it may take years.”)

The roads that are currently being re-surfaced will remain somewhat slippery until a solution can be found (for the foreseeable future), warns Ian Ward.

“The problem we have is that many of the roads which are causing a problem are country lanes and, as such, they are not used anywhere near so much as a main road, and traffic movement is far less. So, it will take far longer for the surface to wear in.

Also, as cars tend to travel in the same track on narrow country roads, the road gets worn in where the car tyres travel, while the rest of the road will remain slippery for much longer without the same wear and tear. Unfortunately, in most cases, this is mainly where horses ride.”

There seem to be two bodies who can address this problem and they are our MP, Mr Bob Seely and the British Horse Society, as both parties are in the position to put pressure on the Government to look at the current problem with the national road surface specification.

There are other areas in the UK that could face the same problem, so if all the local MPs joined forces in Parliament perhaps this issue could be addressed promptly.

Ian Ward commented, “Because the Isle of Wight has a larger horse community per square mile than anywhere else in the UK, the problem is highlighted here on the Island. In the meantime, we as a Council can start to look at different solutions to overcome this problem, but we will have to try and find a pot of money from somewhere. It’s no use trying to place blame at the door of the Isle of Wight Council nor Island Roads, when really it should be aimed at Central Government as they ultimately specify the material that is used to re-surface roads. ( which must be used in carrying out the PFI contract.”)

As we are all aware, any changes to Government policy could take years, certainly not months, so what is the short to medium term solution?

Ian Ward says “There are several options we are looking to discuss, but a lot of what we discuss will depend on finding available funds. At locations where the horse and rider have to cross the road in order to gain access to a bridleway, we could create a crossing for them with a special top coat, while for riders who have to travel 500 metres or more to the nearest bridleway, we could look at widening grass verges so that horse and rider don’t have to ride on the roads, but that’s only if the land is available.

“We could also look at increasing the number of bridleways on the Island, but in order to do this we would need the co-operation of the local farming community. Even if everyone agreed and there were the funds to carry out the works, it would still be a 3-5-year project.

So, what can riders do in the meantime? We put this question to Ian Ward. “We realise there is an issue and we are sympathetic.  The last thing we would want is for a rider to suffer injuries of any kind.  At the end of the day we are a Council that is bound by government legislation. We have looked at the advice available on the British Horse Society’s website which recommends that if you’re out riding and you encounter a slippery road surface you should dismount and lead your horse.  Also, you should never trot your horse under these road conditions. Until we sort this problem out we simply ask riders to act responsibly at all times. We really do want to solve this problem as we do realise that equestrianism is abig part of Island Life and contributes towards tourism on the Island.”

As far as we can see after talking to various parties, it’s clear that these roads will not be ripped up and replaced anytime soon, and neither will the smaller ones (they) wear in quickly.

That isn’t the fault of Island Roads or Isle of Wight council, and the blame has to be laid squarely at the doors of central government, which is the only authority that can change the specification of the road surface.  Sadly, any prospect of that seems too late for the Isle of Wight, as the PFI contract has to roll on and be completed on time.

However, in order to make a change we need to be banging on the door of our only Parliamentary representative Mr Bob Seely, and using the power of the BHS – so please direct all your complaints to these two bodies.

•  It has just been announced as we were going to press that there is a meeting to be held during September 2017, between Bob Seely MP, Paul Herbert (Service Director, Island Roads), Ian Ward (IW Council – Tranport), Rodney Downer (Councillor, Godshill-Wroxall), Alan Hiscox (Director of Safety, British Horse Society).