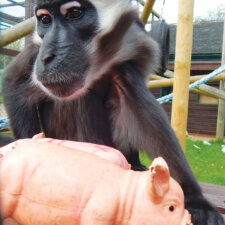 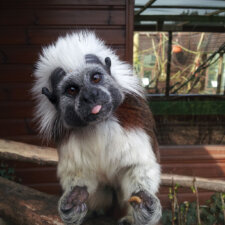 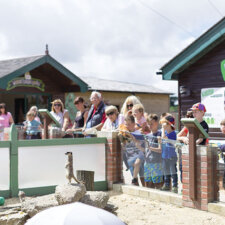 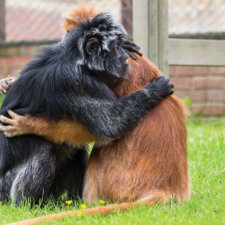 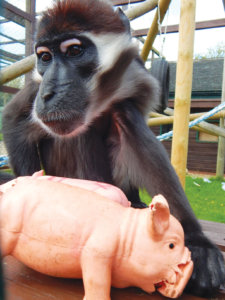 It’s not quite the kind of animal you’d expect to find at the Island’s award-winning Monkey Haven – but a certain little piggy is expected to become a big talking point with the re-opening of the venue for its new season this month.

The piggy in question is actually a squeaky toy that’s become the favourite playmate of two new monkeys who joined the Monkey Haven family last year.

Djimmy and Buna are two gorgeous Cherry-Crowned Mangabeys, brought together to live happily ever after at the primate rescue centre and sanctuary near Newport.

Djimmy was found wandering along a busy road in Germany and as nobody knew what to do with him,  he was sent to a cat and dog rescue shelter, where he was left in isolation for seven years. Finally rescued by primate rescue charity AAP, part of his long rehabilitation involved being given a toy pig to bond with – and it’s now never out of his sight.

Monkey Haven took him on last summer, along with his playmate Buna, who was born in Barcelona Zoo. The AAP had been looking for a partner for Djimmy, and the Zoo agreed that Buna could be a perfect match.  She was released into the charity’s care, and the two primates hit it off immediately.  They’re very calm in each other’s company –  and Djimmy even shares his precious pig with her sometimes!

Keeper Terri Mae says: “We’re all in love with these two! Djimmy is doing so well. His hair has grown back, which is a sign that he’s much happier now. He still gets a bit of anxiety and that’s where the pigs come in – they’re like his comfort blanket, and it’s so sweet to see him cuddling and grooming them. He’s got a lot of love to give!”

“These two are such special monkeys and it’s certainly the first pig we’ve ever had at Monkey Haven!”

Animal lovers will be able to catch up with the playful twosome, along with many other mischievous characters, now the venue has re-opened for its long spring,summer and autumn season. 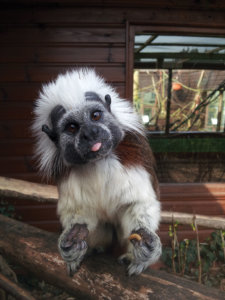 Staff have been hard at work during the winter getting everything ready – from cleaning and power-hosing to re-decorating and building a swanky new home for the reptiles.  This is due to open later in the spring, with new insects being added into the mix.

Half term will see lots of activity – including a birthday party with cake, present-opening and a sing-song for Tonka, and a visit by the Isle of Wight Bat Hospital, the organisation that rescues and cares for bats across the Island.

Whenever they choose to call in, though, visitors will meet the whole of the lively resident family at the rescue centre – including whooping gibbons, mischievous monkeys, amazing owls, incredible reptiles and naughty meerkats.

As the Haven’s Kelly Wickes says, it’s a happy place both for the animals and the humans who visit in their droves.

Kelly and her family were also very happy bunnies last year, when the Haven received the incredible news that it had been voted the Number One Small Visitor Attraction in England.

It meant a trip to London’s Hilton Wardorf Hotel where they were presented with the top award by VisitEngland in the 2017 Awards for Excellence.

Comedian Sue Perkins presented the award, which marks Monkey Haven’s achievement as the best in its category in England.

For Kelly’s dad Don Walser – a former cabinetmaker and long-time animal-lover whose vision led to the creation of Monkey Haven – the award was a long-awaited recognition of the efforts and sacrifices he and the whole family made to get to where the sanctuary is today.

Attending the glitzy award ceremony with Kelly, he beamed: “This award means so much to us. Six years ago, when we set up a primate rescue centre on the Isle of Wight, everyone thought we were crackers. Now we’re the best small attraction in the country. We’re a small charity, but thanks to the support that we’ve had, we’ve been able to continually expand and evolve and care for growing numbers of creatures in crisis, from monkeys who’ve been smuggled through customs to meerkats who’ve been victims of the cruel pet trade.”

Don, who attended the ceremony wearing his lucky monkey tie, added: “Thank you to everyone who has made this possible – our dedicated team of staff and volunteers, and every single person who’s visited us or supported us in any other way. This award is for you all.”

If you’re curious to see what the Award judges were so impressed by, the start of a new season is a great time to find out.

Two adorable Capuchin babies have been added to the ever-popular and much-photographed Capuchin family – Machu, who will be a year old on April 15, and Lin who is four months old.  Both have settled into family life very well, and are still enjoying being carried around by mum. 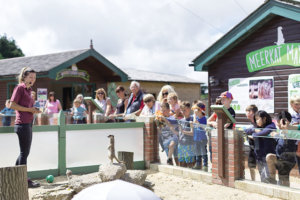 Visitors can find out more about these mischievous little monkeys – along with lots of other resident creatures – at the daily keeper talks.  They can also be seen enjoying their food at regular feeds throughout the day, and find out more about the animals and how they came to be rescued, as well as getting close-up views of some of the reptiles and hand-reared owls who make regular appearances at the daily talks.

There are also trails, play areas, a tea room, gift shop, full disabled access, plus an exciting new App – and for Easter, there’s a special “Alice in Monkey-land” theme to look forward to.

As a charity, the Haven uses all proceeds to support the animals, many of which have been rescued from the cruel pet trade and are very rare.