The merry month of May

Home|Features|The merry month of May
Previous Next

The merry month of May 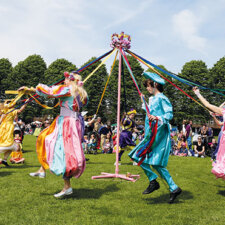 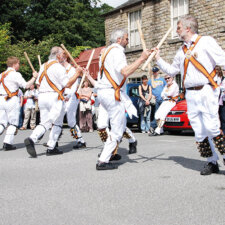 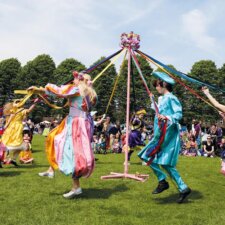 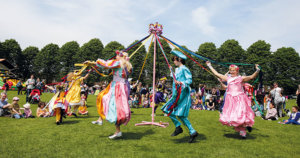 It’s a strange little Bank Holiday Monday that pops up each year between Easter and Whitsuntide and takes many of us by surprise.  In fact many people seem unsure why they get a day off for May Day at all.

In fact, this ancient festival day – which the Celts knew as Beltane – was only declared a national Bank Holiday in the UK as recently as 1978.  But instead of making May 1st the national holiday as it is in many other countries, the Government decided to instigate the spring bank holiday on the first Monday in May.  Hence May Day itself – May 1 – is not a public holiday in England except when it happens to fall on a Monday.

This year the holiday falls on Monday May 2nd, and in towns and villages all over the UK, there’ll be an explosion of traditional celebrations.

Chief, and most colourful among these is dancing around the Maypole, with dancers weaving multicoloured ribbons into glorious patterns.

This ancient rite goes back to the days when on May day, people would cut down young trees and stick them in the ground in the village to mark the arrival of summer. People danced around them in celebration of the end of winter and the start of the fine weather that would allow planting to begin. 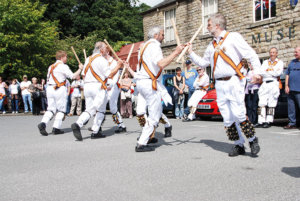 Maypoles were once common all over England and were kept from one year to the next. Schools would practice skipping round the pole for weeks before the final show on the village greens.

The rest of the day would include festivities such as Morris dancing on the village green, archery contests and exhibitions of strength – and then would come the highlight of the day, with the crowning of the May Queen, who took no part in the games or dancing, but had to sit in a flower-decked throne and watch her ‘subjects’ enjoying themselves.

The theme of all these celebrations was fertility, and literally the ‘rising of the sap’.

The plant most associated with this festival is the Hawthorn, whose creamy-white scented flowers have long been known as May Blossom, and are a welcome messenger of warmer months ahead.

In fact it’s believed that the old saying “Never cast a clout till May is out” – meaning don’t put all your woollies away until the end of May – actually means don’t stash them away until the May blossom comes out.

These lovely blossoms were used to make garlands and posies as part of the outdoor celebrations – but curiously it’s always been considered unlucky to take May blossom indoors – a superstition which is found more widely than for any other plant in the British Isles.

There are many theories for why the blossom might be considered unlucky, but most have to do with its heavy sweet scent, which includes a particular chemical produced by the human body after death!

So, at a time of celebrating sunshine, revelry and fertility, perhaps it’s best to keep the May blossom strictly out of doors!