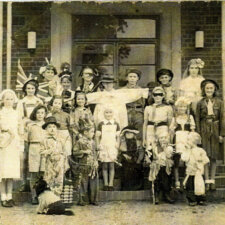 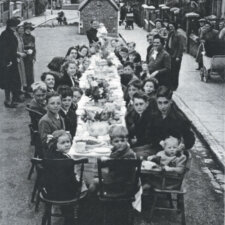 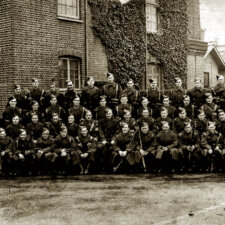 At last the people of Britain could celebrate the end of the six years of war with Germany. On the Isle of Wight windows popped open and dozens of Union Jack flags were put outside and strings of bunting and flags, some stored since the Coronation, hung across streets.  Church bells rang, the ships anchored in Cowes harbour were dressed overall and their sirens sounded with the hooters at the factories.

The 8th May was a warm sunny day (for the first time in almost six years the weather forecast was published in the newspapers) and at 3 o’clock in the afternoon the Prime Minister, Winston Churchill, broadcast from Downing Street to announce that hostilities with Germany would officially cease at one minute past midnight that night.   It was a signal for celebrations to start.

Women dressed up in anything they could find that was red, white and blue, even little children in prams clutched a small Union Jack flag, and the Island’s towns and villages held children’s victory tea parties.  Long rows of tables were set up in the streets and somehow the organisers managed to find enough food for often up to 80 children and after the last sandwiches and buns had disappeared, the children joined in the games, singing and dancing. After dark the sky was lit up by bonfires and fireworks, sometimes with an effigy of Hitler hung on a gibbet topping the fire.  Not surprisingly, the pubs started to run out of beer. 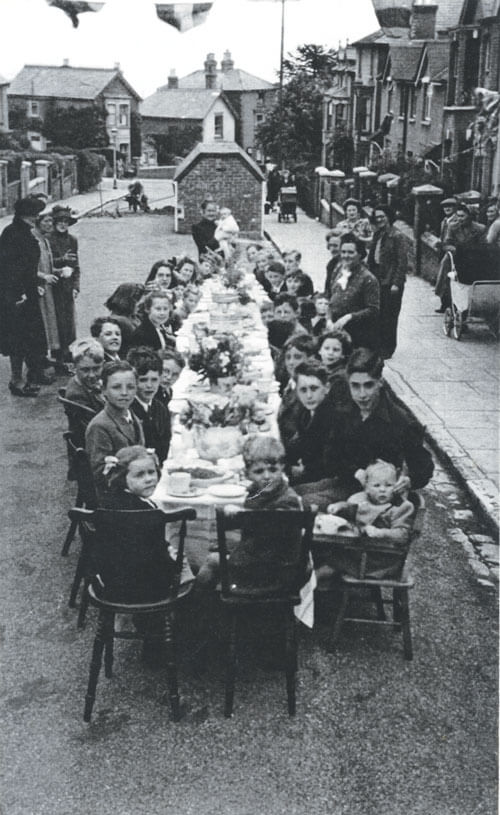 Many of the churches throughout the Island held thanksgiving services and in West Cowes 1,200 children marched with a Royal Marines band to the recreation ground for a programme of sports followed by tea prepared by the Women’s Voluntary Service and the Townswomen’s Guild.  In East Cowes 600 children enjoyed a tea and sports organised at the Saunders Roe sports ground while the children from Great Preston Road in Ryde were taken for a mystery charabanc tour after their tea.   At Chale the villagers sports day was followed by a thanksgiving service and tea for 250 people in a large marquee.

The WVS, originally called the Women’s Voluntary Service for ARP, was formed to recruit women into Air Raid Prevention work and their uniform, bottle-green flecked with grey and wine-coloured touches, was designed by the London couturier Digby Morton.  They had to pay for their uniforms although they didn’t draw any pay and with their motto, “The WVS never say no,” it was a service of ‘no rank’, only jobs.  But in September 1945 their work was done and around 150 women met for a farewell meeting at Northwood House in Cowes to hear Mrs. Wall, the centre organiser, thank them.

She said that for six years during the war Island members had played a key role wherever help was needed – fitting gas masks, housing and feeding  evacuees, collecting salvage, taking patients to hospital, providing tea when bombs had fallen near Civil Defence workers on duty, darning soldiers’ socks, and making thousands of pounds of jam.  Besides many other duties they had staffed rest centres and ran a Citizen’s advice bureau and helped with the Christmas mail.

Everywhere things were being wound down and it was rumoured that an ARP post had raffled its kettle with the proceeds going to the Red Cross.  At Cowes, the French Chasseur Base at Marvin’s Yard for the Free French sailors and their ships since 1941 was finally closed down.  Some of the French had married local girls and six of their men who had been killed in action were buried in Northwood Cemetary.   In his address after the farewell parade, Sir Godfrey Baring said many of the Island people would be sad to lose the good friends they had made among the French.   “It’s not goodbye,” he said, “but au revoir.”

For security reasons few people were aware of the work carried out by the Missions to Seamen during the war when Cowes was a naval base and the Admiralty provided a hostel for seamen, first at the Pavilion Hotel on the Parade and later at Busigny in Castle Road.  There was accommodation for 44 seamen and month after month the Solent station of the mission took in a mixture of British, American Greek, French, Swedish, Norwegian and Polish seamen and on one occasion 90 shipwrecked men were catered for by the staff and voluntary workers.

In addition, the Mission’s motor launch went out to the ships anchored in Cowes Roads with books and papers and during the six years of war, 3,073 vessels had been visited by the chaplain.  The mission launch continued its work when the war ended but the mission was closed because of the many commitments at their overseas stations. 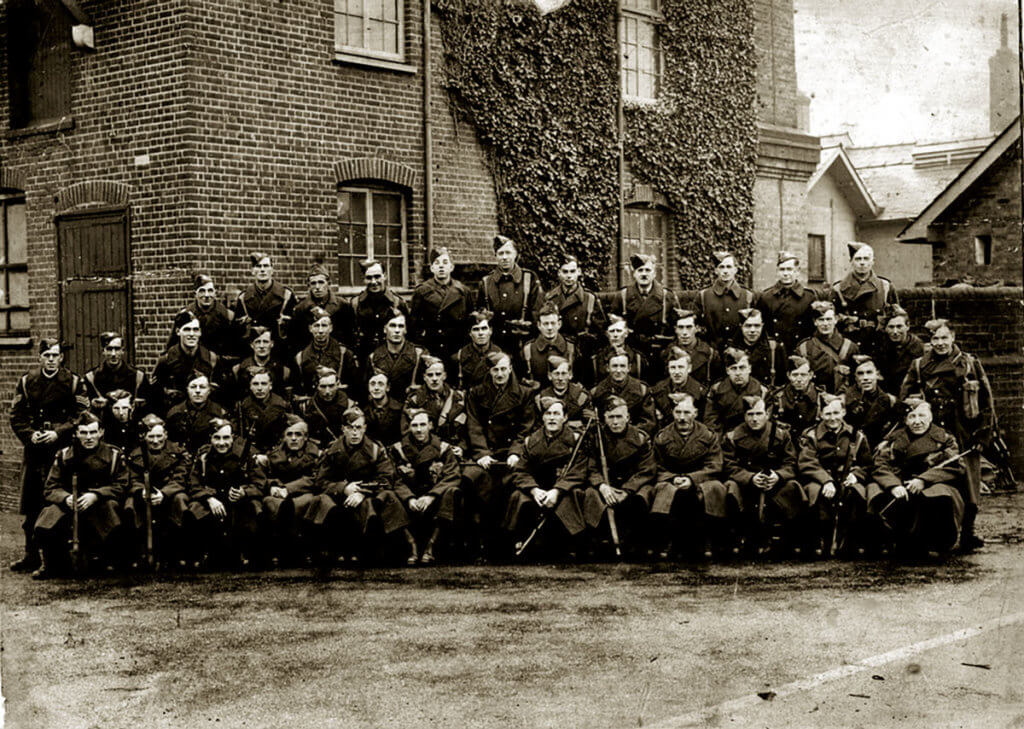 As the euphoria over victory in Europe died down, the Island welcomed home the fighting men from abroad and those from prisoner-of-war camps.  But on the Home Front the country was warned of the reality that lay behind winning peace as restrictions in food rationing were tightened.

In October a Thanksgiving Savings Week was opened in Cowes on the site of the bombed George Hotel.   The chairman of the Savings Committee, Mr. F.J. Petty, said that saving was needed because the country was going through a difficult time and Mr. Holmes, President of the local Savings Committee, added after reading a telegram from Hugh Dalton, the Chancellor of the Exchequer, that they had raised £2,000 to support the Royal and Merchant Navies Week, but now he hoped people would invest in National Savings.   Torchlight processions were organised at night to burn ‘squander bugs’ on the bonfires built at East and West Cowes, Gurnard and Northwood.

But the Isle of Wight can be proud of its war record.  In September 1939 it provided homes for hundreds of evacuee children from Portsmouth and after the Germans occupied France in 1940, little ships and paddle steamers left the River Medina to help evacuate the troops from Dunkirk. Almost overnight the Isle of Wight became a military fortress with men of the Black Watch regiment installing defences around the coast – later it was found that at one time the Island was included in Hitler’s plan to invade Britain with Sandown Bay selected as a possible landing place.

The Island was the first place to get a Home Guard Auxiliary Unit, the first organised resistance unit in Europe, the plan being that in the event of Britain being invaded, the men would stay behind after the population was evacuated.

Only Dover recorded more air raid alerts than the Island, here the sirens sounded 1,600 times and a total of 1,748 bombs fell on the towns and countryside.  An 5.25 inch AA gun on the Island shot down an enemy plane seven miles up in the sky and the battery crew were mentioned in the national press but named only as an AA battery in the south of England.  Another claim to fame was the Island’s link to PLUTO, the Pipe Line Under the Ocean, with a camouflaged pipe line across the Island and pumping stations at Shanklin and Sandown for the fuel supply to the Allies’ invading forces.

Before D Day thousands of craft were assembled in the Solent ready for the invasion, fortunately after the Island’s famous spy, Dorothy O’Grady, had been caught and sentenced to death at her trial in 1940, though the sentence was reduced to 14 years imprisonment after an appeal.

But there’s one unsolved mystery in the Island’s story.   It appears that after the war, a Dr Lawrence met a German who claimed he was one of a party of German soldiers from Alderney who raided the lower radar station at Woody Bay during the war and captured prisoners.  But when the man’s story was checked in the station’s log book, the pages for the date he mentioned were missing so there was no proof that the raid took place.   But Adrian Searle tells me that he followed up the story and talked to the man’s son who assured him that a full account of the raid is locked in a safe in Frankfurt to be released when his father dies.

And there are two other versions of the story, one that German soldiers were put ashore by dinghy from an E-boat near the radar station where they killed some Canadian soldiers before being picked up later by a U-boat.

The second version is by a Kevin Dakin whose late mother told him a story of when she was a Wren on the Island in 1944.  It appears that when a young soldier guarding a searchlight unit disappeared, it was supposed that he’d fallen off the cliff.  But some time later a Red Cross postcard came through saying he had been snatched by a German raiding party and was a prisoner of war.

If it happened, security forces made sure no evidence was left behind after the war.  Perhaps one day some one will solve the mystery.”

I am most grateful to the following people who helped me research ‘The Island at War’ or have written to me especially the staff of Carisbrooke Castle Museum and the Isle of Wight Record Office, Adrian Searle, Roy Brinton, Charles Taylor, Mark Stedman, Tom Blow, Tom West, evacuees Francis Sallis, Jennifer Nicholls and Laura Hunt and members of the Women’s Land Army, the Home Guard and the Civil Defence.