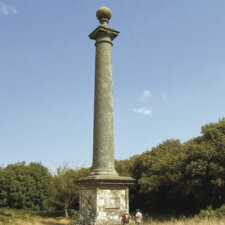 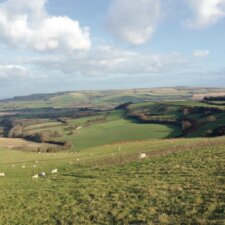 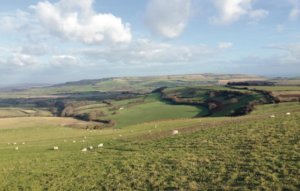 I first came across the Hoy Monument over 30 years ago when I was walking with my parents across St. Catherine’s Down up to St. Catherine’s Oratory, or as we know it better the ‘Pepperpot’ – the second oldest lighthouse in the country.

This area of the Island is ideal for walking, picnicking, riding and jogging. Recently when I was walking there with my own family we watched as people para-glided off from the top of the Downs.

The Monument was erected in 1814 to commemorate a visit by the Tsar Alexander I. Although visible for miles around it is only accessible by foot, but is well worth the effort. Close to it is an imposing structure 72ft high and made of local stone. It is also set in some of the most beautiful countryside the Island has to offer. There are far reaching views out to sea and across the Island. At its base there is a plaque erected in 1857 marking the sacrifice of soldiers killed in the Crimean War.

Although Michael Hoy, who erected the Monument, lived locally at nearby Hermitage, he was in fact a Russian. He wanted to mark with gratitude the country that had enabled him to prosper, with an acknowledgement of what the Tsar had done to help defeat Napoleon and his pan-European ambitions.

In his day Hoy, who lived from 1758 to 1828, was a notable Island and City of London figure. In 1812 he was made a Sheriff of the City, and locally he owned much property and over 1,700 acres. The Tsar visited Portsmouth, but never made it to the Island so never saw the distinctive mark of respect and admiration. 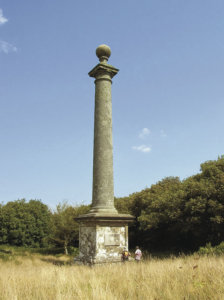 The monument is owned and maintained by Chale Parish Council. It was restored in 1992 at a cost of £85,000, which was donated. As a reminder though that things are constantly evolving and views and attitudes changing an inscription at the base of the column reads: ‘In Honour of those brave men of the Allied Armies who fell on the Alma at Inkermann and at the siege of Sevastopol AD 1857.’

This was placed by William Dawes who rented the Hermitage after Hoy’s death.  He was an active Army officer and felt passionately that Britain’s role should be appropriately marked.

The Monument is a testament to a fascinating period in British history. It reminds us that individuals can leave enduring ‘footprints’ on the land in which they live and work. Hoy bequeathed to posterity a landmark that continues to challenge and provoke us into remembering and learning about what was going on at the time in which he lived, and to reflect on his motivation and actions.