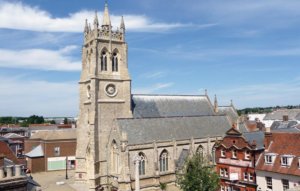 This is the last in the series on Island churches. As such it is appropriate I should finish with the principle church of the Island, Newport’s great Minister Church of St. Thomas. Sitting at the heart of the county town, dominating the skyline and the focus for much civic as well as religious activity, this has been a site of Christian witness for over 800 years. The church truly sits at the heart of Island life.

Although now generally known simply as St. Thomas the original church on the site was dedicated to St. Thomas of Canterbury, after Thomas Becket. When the current church was dedicated it was done so for both Becket and St. Thomas the Apostle. There is an attractive glass vestry screen showing the life of Becket.

The original church having fallen into disrepair, a new one was built by the Victorians in 1854-55, with the foundation stone being laid by the Prince Consort.

There are many interesting features connecting the current church with its predecessor. These include the alabaster effigy of Sir Edward de Horsey; the seating for the Mayor and local councillors, and the Vicar’s desk. These are all reminders of the continuous and unbroken link of faith and worship that has continued on this site.

The pulpit is a particular feature of the church and is worth studying carefully. It sits opposite the Vicar’s desk and is a fine example of the work of the Flemish woodcarver Thomas Caper.

It was a gift in 1637 from Steven Marsh, Mayor of Newport, whose crest is carved on the backboard. The carved panels on the pulpit depict the seven virtues: faith, hope, charity, justice, prudence, temperance and fortitude. And at the bottom panels the seven Liberal arts: grammar, dialect, rhetoric, music, arithmetic, geometry and astrology.

In the south aisle there is the original font dating from 1637. At some point this had been removed from the church and a new one was installed to replace it. Recently the original font was found being used as a bird bath in someone’s garden in Newport and has subsequently been returned.

The church has an architectural pipe organ in the west gallery; installed in 1870 and replaced in 1925, with a rebuild in 1957.

A reminder of the importance of the civic role the church plays are the flags and plaques that represent many important local connections, including of course the seating for local politicians.

In front of the altar are buried the remains of Princess Elizabeth. You can see her memorial in the north chapel. The main memorial, which sits in the north aisle, was given by Queen Victoria in memory of this second daughter of Charles I. Elizabeth had shared her father’s imprisonment in Carisbrooke Castle, and it is said died of a broken heart after his beheading.

St Thomas tells the story of the Island through its connections, those commemorated and what happened to the buildings that have sat on this site. Like the Island people it serves, it is resilient, proud and enduring.

With acknowledgement and gratitude to the Church’s website: www.newportparish.org.uk/newportparish/stt-guide.htm