Home|Equestrian|Scooby makes his mark
Previous Next 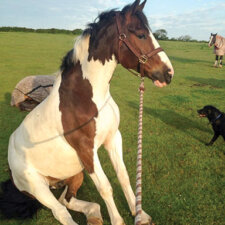 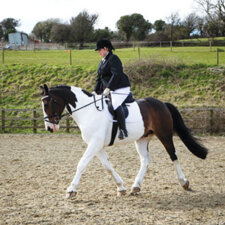 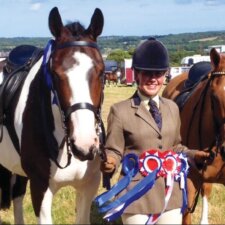 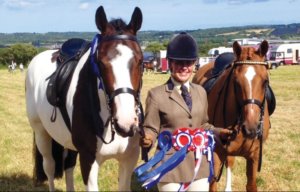 After losing her previous horse to colic four years ago, Heidi Carden wasn’t really looking for a replacement – until something about an ad in Horse and Hound captured her interest.

She promptly took off on a road trip with her instructors and trusted friends, Sue and Sarah Holmes, to see the skewbald Irish Sports Horse at Slough Farm Livery in Claygate, Surrey – and that was it!

Heidi reckoned that Scooby, aka Billy the Kid, had a good trainable temperament and she felt ‘safe as houses on him’, so on the good advice of successful Event rider Sarah, she took the plunge, and has never looked back.

Scooby has certainly made a name for himself since arriving on the Island – and not just for his competition successes in dressage and jumping.

He’s also a quirky character, and in the summer can be spotted sitting like a dog, watching the world go by.

“He looks very comical and can sit for ages like this!” laughs Heidi. 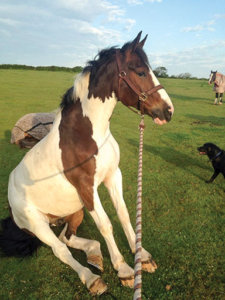 She confesses that he can also be a ‘miserable so-and-so’ in the stable and even more so when there is food around – but he turns into a gentle giant with her niece and nephews.

Heidi, who works as a Special Needs Officer for IW Council and is also Secretary of the Island’s Riding for the Disabled group, says she’s had some great times with Scooby – as well as what she describes as ‘a couple of memorable lows’.

“Looking back now they are very funny but at the time they weren’t!” she says.

“The funniest, although not at the time, was when I was out riding with Phil and Wendy Sampson. What started off as a pleasant trot ride ended up being a flat-out gallop along Bleakdown main road! Despite going along at breakneck speed, legs going all over the place, we managed to thank every bewildered car driver who slowed down as we sped past!”

He might be something of an eccentric, but Scooby’s energy and striking good looks come into their own in competition events.

Heidi competes him in unaffiliated and affiliated dressage events – scrubbing him to within an inch of his life ready for competitions! Horse and rider have qualified for the British Dressage Pet Plan Area Festival and Heidi hopes to compete with him at Crofton in October .

Meanwhile, Scooby is kept busy by another local rider Jessie Vanassche, Mitsubishi Motors Cup Runner up, who competes him in showing, jumping and cross-country events, whilst Sarah Holmes hunts him through the winter with the IW Foxhounds, competes him in jumping events and rides him cross-country.

Says Heidi:  “I had no expectations at all when I entered him and Jessie into the 2014 County Show but we came away with two class wins and two championship titles, which was fantastic! Jessie rode him brilliantly and we got loads of great compliments.”

“I was absolutely over the moon to come away from the 2016 County Show with two class wins and two championship titles!” said Heidi.

Scooby’s first jumping show away from the Island, in February 2015, was also a success: he and Sarah Holmes were part of the Isle of Wight Riding Club’s Novice Jumping team and he performed brilliantly.

Then in June this year he was partnered by Jessie Vanassche for his first one-day event, at which they were individual competitors in the British Riding Club horse trials at Moreton. “Never having done anything like this before, we had no expectations of him” says Heidi, “but he finished the event on 32.5 faults; if he had seen the first fence in the showjumping and not had four faults, he would have won! As it was he finished in 7th place.”

In July she and Scooby were part of the Isle of Wight Riding Club’s senior prelim dressage team and senior riding test team competing in a riding club area qualifier at Pinkmead. Despite doing a dressage test in an arena ‘that resembled a ploughed field’, they scored 66.04{a9dddf1bd2af35332cd5613cac8e63e148b38f23ebed35c9943c32a7f65a9815} in the prelim test and 69{a9dddf1bd2af35332cd5613cac8e63e148b38f23ebed35c9943c32a7f65a9815} in their riding test. Overall, their team came first in the prelim team event test and second in the riding test team event – which means they have qualified for the Riding Club Championships held annually in Lincoln.  Go, Scooby!