Neil and Dawn Fradgley are “Team Isle of Wight”

Neil and Dawn Fradgley are “Team Isle of Wight” 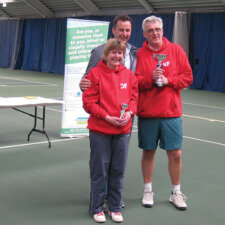 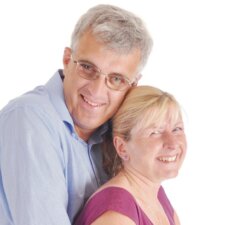 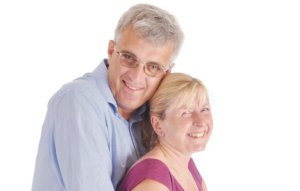 Most people are amazed, amused – or simply don’t believe it, when husband and wife Neil and Dawn Fradgley mention their recent sporting success: winning a team trophy in a national tennis tournament.

Because the Ryde couple are both visually impaired, and until a year ago the idea of playing tennis had never crossed their minds either. Both are unable to drive or read print, and Dawn needs a white stick when walking.

“Most people think it’s hilarious – and to be honest, not so long ago, I would probably have thought it ridiculous too!” says Dawn, who is totally blind.  She lost her sight as the result of a degenerative eye condition that was diagnosed when she was 10 years old.

She and Neil, who has partial sight, heard about visually impaired tennis from friends, and decided it was a sporting challenge they wanted to aim for.

Not that it was easy – apart from anything else there are no suitable facilities on the Island, which means having to travel to Portsmouth’s indoor tennis and gymnastics centre for self-funded training sessions with coach Ashley Neaves.

But the Fradgleys – who first met on a skiing holiday and then again on a sailing holiday – have always been determined to push the boundaries of their disability.

“We’ve always tried to turn things around and look at what we can do, rather than focusing on what we can’t,” says Dawn. 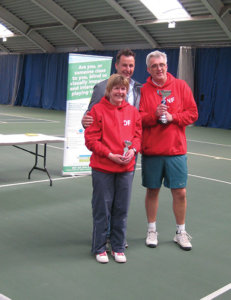 They have completed several Great South Runs together, and Neil played football for the England Partially Sighted football team.

Having now discovered visually impaired tennis – which uses a shorter, indoor court and audible sponge balls containing ball bearings – the pair are determined to take it to the top.

They’ve been spurred on by their recent success at their first national tournament in Newcastle, in which Dawn was runner-up in her section, whilst Neil was runner-up in the singles and a winner in the doubles of his section.

As the only competitors from the Isle of Wight, they were judged as a team, and for their extraordinary double effort, were awarded the Team trophy for the tournament.

The next morning their daughters Elizabeth, 14 and Georgina, 12, came downstairs to find the shiny trophy sitting on their kitchen table.

“I think they were amazed – and pretty impressed!” laughs Dawn.

Now the aim is to bring home some more silverware from the National Championships at Roehampton in October.

“I guess I am quite competitive,” says Dawn, a senior physiotherapist working part-time at St Mary’s Hospital.

But she and statistician Neil, who also works at St Mary’s as Head of Performance and Information, are also keen to encourage other visually impaired people to get involved in the sport on the Island.

“It’s definitely a growing sport all over the world,” she says, “so it would be great to raise awareness here, perhaps get some sponsorship, and get a club going on the Island if we can”.