In pursuit of top hat and tails

Home|Equestrian|In pursuit of top hat and tails
Previous Next

In pursuit of top hat and tails 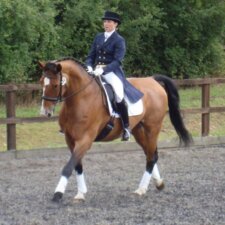 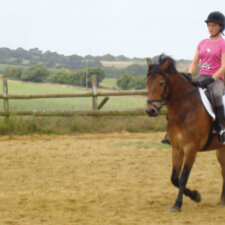 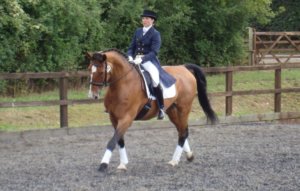 Like so many of us, Martine Harbour from Godshill has always wanted to compete in dressage at the highest level, wearing her top hat and tails – a dream unlikely ever to come true. Until now.

Born and bred on the island, Martine (44) is from a non-equestrian background, but has always wanted to ride. She began as a child having one riding lesson a fortnight at a small riding school in Sandown owned by Dylis Chandler.

“I used to beg and borrow ponies,” says down-to-earth Martine, who didn’t have a horse of her own until her mid 20s. “My first horse was Roger, a Welsh cob that I bought from the late Phil Legge at Brickfields. Roger was three and I didn’t know a thing,” she laughs.

“It was the blind leading the blind, but I trained him to novice dressage level. A friend helped me and then I had lessons with Daryl Smith. I thought I wanted to do showing, as very few people on the island did dressage then, but I got bitten by the bug,” she explains.

After Roger came Red – a just-broken four-year-old and Martine planned to try all equestrian disciplines with him.

“Red was a Hanovarian/Thoroughbred with lots of attitude and I trained him to medium dressage level by myself really. Daryl helped me in the beginning and there were people who used to visit the Island to help us occasionally. I’ve always wanted to push myself to see how far I could go and this was my chance. I had a trailer and Red and I competed all over the south of England, but the older I grew, the more interested I became in pure dressage.”

Six years ago, it became clear to Martine’s non-riding partner Andy Baskill, that Red had reached his limit. He clearly wasn’t as keen on dressage as Martine was, so Andy convinced Martine that she needed a horse that was designed for the job.

“We looked everywhere,” recounts Martine. “Finally we found a horse at French National Champion Michel Assouline’s yard in East Grinstead, but it failed the pre-purchase vetting. However, Michel thought he had another nice horse that would suit me and although we couldn’t afford him, the owners wanted to sell him quickly. We made an offer and Kluedo was ours. Then it all went wrong.”

Kluedo had already been trained to medium level and had lived in a professional yard. He had never been in a field or ridden out around the lanes. He was a very big horse at 17.3, and had been pushed too hard too soon, when his body just wasn’t strong enough. If Martine asked too much from him, he would stand on his hind legs, going higher and higher.  Martine was terrified.

“It scared me to death to ride him and I considered giving up. If I had, he would have been shot and I just couldn’t do that. He is such a gorgeous, friendly horse, so I forced myself to carry on. I used to shake every time I had to ride him, but I couldn’t show him I was scared, because he’d pick up on that and be frightened himself.”

“We competed at unaffiliated elementary and medium level. He was only eight and I began to realise how afraid he was. It became obvious to me that, in the past if he made a mistake, he had been beaten. If he didn’t understand, he would just panic and stand on end and it took years for him to learn that it was OK to get something wrong and he wouldn’t be punished for it. 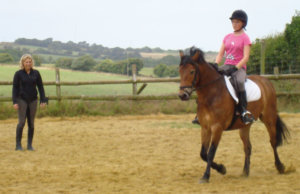 “I just kept teaching him, building up his strength and now we compete at Intermediare I level.

Nicola Jourdain, a Grand Prix rider who has represented Britain helped Martine with Red and when Andy and Martine bought Kluedo, Nicola had a ride on him. She advised them to sell him immediately before he killed Martine. Four other professional riders had said the same.

Martine persevered for three years with the impossible Kluedo, while Andy quietly learned to ride so that he and Red could try to persuade Kluedo that it was safe to go out of the yard for a ride. Riding became something that Martine and Andy did together and Andy is now a regular visitor to Robert Booth’s yard just outside Newport, where he learned to show jump on the now 19-year old Red.

“Slowly Kluedo and I got to know each other and now he trusts me implicitly. We still have bad moments and he does still rear sometimes, especially when I’m teaching him something new, but I am not afraid of him any more. Now, if he doesn’t understand I know how to get round the problems.

Kluedo is 14 and in his prime and Martine’s aim is to train him to Grand Prix level. They have moved up to Intermediare II, just one grade down from Grand Prix, which is Olympic level, and Martine has started to teach Kluedo how to change legs at every stride.

“I always wanted to compete in a top hat and tails, and now we do it all the time. At the beginning, I had given up all hope. It is a fantastic achievement. I am so grateful to Kluedo for teaching me so much on the way. He owes me nothing. I have learned so much more than just riding. I have discovered how a horse thinks, learns and reacts. I have an understanding of what goes on in their heads. I hope we get to compete at Grand Prix if we are good enough,” she says.

Earlier this year Martine became a dressage trainer herself after being made redundant. She now trains all types of rider, from beginners and nervous riders to the more advanced competitor. It took four years for Martine to get her top hat and tails. “There is no substitute for dedication and hard work,” she says to her students. As for the building of a partnership with Kluedo, Martine says it has been blood, sweat and lots of tears, but worth every moment.