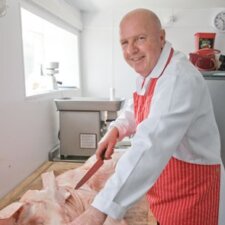 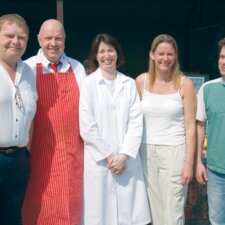 Briddlesford Lodge Farm had something to celebrate at the end of May – a perfect marriage. Island Butcher, Paul Murphy, with the help of his wife Niki, has joined the Farm Shop, a source of untold quantities of Island produce.

There was something of a carnival atmosphere, as even the weather turned out in its best bib and tucker to herald Paul’s arrival. Geoffrey Hughes, much loved actor of Coronation Street and Royle Family fame, performed the opening ceremony, and Andrew Turner MP, former High Sheriff David Langford and Councillors Dawn Cousins and Brian Mosdell came to sample an Isle of Wight bacon butty, and to enjoy the live music.

Getting Paul on board is something of a coup for shop owner Louise Griffin. “Farmers play a vital role in keeping the countryside looking beautiful but we can only do this by increasing profitability. Our  Farm Shop has enabled us to reconnect with the consumer and made us less dependent on the fluctuating milk price.’’

It was Louise’s great-grandfather, Charles Griffin, who began this family’s long association with dairy farming at Briddlesford, when he arrived as a tenant in 1923 with his 12 cows. The family have ridden the sad decline of the industry thanks to sheer hard work. Her father, Richard, bought the farm in 1986 and has built it up from 130 to 280 acres, and now runs it with his son Paul and daughters Louise and Izzy. Thanks to Louise’s vision of excellence for the shop, customers will find supermarket goods a poor second. 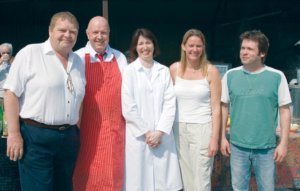 Having skilled butcher Paul Murphy as part of the deal is just the next piece of the jigsaw in Louise’s scheme. Planning permission for a Café and Education Centre has recently been granted and they hope to open by the autumn of next year. She is passionate about supporting producers of Island goods, and her shop reflects this: it has to have one of the widest ranges of Island products on offer in any one place.

You only have to look at Paul’s counter to see the quality of his meat. His beef is rich and dark, showing it has been hung for longer to develop its flavour and tenderness. He, too, looks the part. Large and avuncular in his butcher’s whites, he is happy to give advice on cuts of meat depending on purpose and pocket.

“I use Andrew Hodgson’s beef and lamb, Les Morris’s Lamb and I soon hope to have a continuous supply of Island pork,” says Paul. He is delighted to be part of Briddlesford Lodge Farm, having established a firm following by taking his meat to farmers’ markets.

Not that having a settled outlet for his goods makes him any less ambitious. He makes, he says, 58 varieties of sausage. That’s one more than the famous Heinz 57. Maybe for Paul its Briddlesford Lodge today, tomorrow the world…

April 2017: Paul is no longer at Briddlesford and has now got his own shop in Regent Street, Shanklin. Paul Murphy Butchers.