Phil Legge: “I arrived with ten pounds and a box of tools…”

Home|Equestrian, Interviews|Phil Legge: “I arrived with ten pounds and a box of tools…”
Previous Next

Phil Legge: “I arrived with ten pounds and a box of tools…” 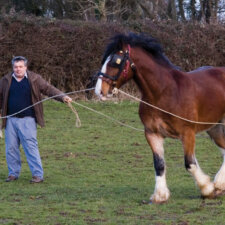 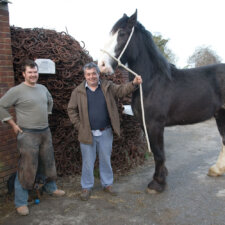 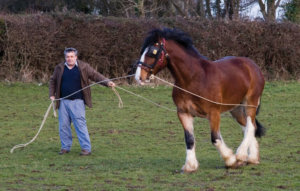 Herefordshire-born Phil Legge came to the Isle of Wight as a 20 year-old farrier, with an ultimatum from his father ringing in his ears: he had to give the move a good go, and so was forbidden from returning home for 12 months. As it turned out, he ended up loving the Island so much that he made his life here – and established Brickfields, the well-known equestrian centre and tourist attraction in Ryde.

Here we talk to Phil about the early struggles and successes, his love for his adopted home – and his ambitious plans for the future.

Born in Hereford in 1952, Phil grew up on his parents’ 150-acre dairy farm. He was one of a large family of six children, and because there was not enough money in farming in those days for all six of the Legge brood to earn a living at it, they all ended up venturing off into different trades.

Phil failed the 11-plus and admits to skipping school a lot of the time to help his father on the farm or attend horse sales. “I was probably learning more at home than I was at school,” recalls Phil. “In fact, the only level I got was a spirit level!”

Phil was passionate, though, when it came to horses. He had been riding them since the tender age of two, being led round the field by his father. By the age of four, he had his own pony to ride round the farm, and was a member of the North Herefordshire Pony Club for several years.

Phil’s earliest experience of the equestrian business was buying “green” (unbroken) horses with his father, bringing them on and then selling them for profit.

This gave him a wealth of experience in riding difficult horses. “As soon as I got a horse right, my father would sell it on to anyone with a pocket full of money” he recalls. “I always had something to ride, and I always had the best pony!”

On leaving school at 14, Phil had already decided he wanted to be a farrier, and managed to secure an apprenticeship in the nearby market town of Bromyard, with J.G Searle & Son.

“This provided a solid grounding for me, as J.G Searle had many elements to the business, including, agricultural engineering, blacksmiths, farriery shop, coach builders, and undertakers, so it gave me a wide and varied experience, all within one business” says Phil, who spent five years working there.

“Although I just concentrated on the farriery, I did help out a lot in the other areas of the business, which gave me a good grounding for future life. During the five years of the apprenticeship, I spent 16 weeks at college every year, which I loved. In fact I excelled in college. I built a really good relationship with my tutor Billy Watts who was a world champion farrier for two years running. He took me under his wing and looked after me”.

Once Phil finished his apprenticeship, he had a gentleman’s agreement with his boss that he would not set up in business in the same area.

“As I am a man of my word, I looked elsewhere to set up” he says. “At the time, a neighbour of mine had just come back to the Isle of Wight after visiting a friend of his (Harold George). I was told to give Harold a call as he could not get his horses shod on the Island because of a lack of farriers. “Harold suggested I should come down and have a look, and my father drove me here because my van would not make the journey. I was 20 then, and weighed 10 stone!

“On the way home I thought what a long way from home this was. It was a big step to move all this way, as I had never been away from home before. I had no money at the time as I was earning only £9 per week when I finished my apprenticeship.

“However, my father said to me that if I decided to go, I had to agree to stay for at least 12 months, and not come back before the 12 months was up. He also said he’d pay a deposit on a mini pickup for me, to make sure I turned up with the right image. “So I came to the Island with a £750 mini pickup on HP, a box of tools, and about £10 in my pocket, nothing else!
Phil moved into digs in Sandown, and also rented a little lock-up in Ryde’s East Street, with two stables attached. His digs and workshop rent was only £8 per week, and at the time the going rate for a set of horseshoes was £2.50. “I used to make all the shoes myself from straight bars, as this was cheaper than buying them in” he says. “I only worked 5 days a week, and was shoeing about 10 horses a day, so I found myself suddenly very well off.

I used to go home almost every weekend. The first two years on the Island was great fun, I had never earned so much money, and within 12 months I had a new car and a new pickup. All in all, I had the time of my life”.

He met his wife-to-be, Pam, at one of the horse shows he used to go to. He recalls that once they started going out together, he didn’t seem to go back home to Herefordshire quite so frequently at weekends! 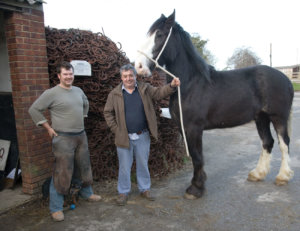 He and Pam were married in 1975, at Godshill Church, and soon afterwards they purchased Brickfields, although it was not exactly the place it is now. “Back then, it was a cottage and four acres of grounds, and a couple of tin sheds,” says Phil. “It had been a brick works. It wasn’t very expensive, as in those days you could buy a good house in a street for around
£7,000. Brickfields was a little bit more than that though”.

Phil and Pam couldn’t buy Brickfields on a normal building society mortgage because they had no books, no history… and, besides, the property was unmortgageable. In the event, a very generous local family loaned the money to purchase the property.

“I had paid them back the money within a few years of borrowing it, with interest” says Phil, “ but I will never forget this kind act. I also had a lot of help from all my neighbours around me. They looked after me, and the Isle of Wight took me in, I suppose, I was very lucky, as really I was an outsider but I was a farrier, and the Island desperately needed a farrier”.

The house itself was a shell, with no kitchen, no bathroom – and therefore a lot of work to do. Most of it was done in the evenings and weekends as Phil could not afford to pay anybody. “Everything was falling down,” he says. “We moved into the house with a tap on the wall and a drain in the corner”. In 1977 he built a new shed to house a caravan, which he and Pam used to use to take to all the shows to sell saddlery.

“We used to wheel that caravan from the barn, drive to the show, pitch up, and then I used to go down the pub and leave Pam to sell the saddlery, because Sunday was my only day off! We used to drive back home, back the caravan into the barn, and hey presto we had a ready-made shop. We built a good business up with this during the summer months”.

“This began to make us think about the winter months, when there was very little happening, and we decided to build an inside school where we could sell our saddlery all year round, as no one else on the Island was doing this. “So we applied for planning permission in 1980/81 for the indoor school, car parks and refreshment areas, and that’s how the Brickfields Arena as you know it today was born”.

Having got the planning permission, Phil then faced the job of financing the ambitious project. “I donned my best suit and approached my banks and got as much help from them as I could, in the way of loans and overdrafts,” he says. “However, I wish I had known then what I know now about borrowing money. I could have borrowed far more cheaply.

“I could have been a lot wiser perhaps. I never planned anything really, things just happened”. “One of the comments people make to me nowadays is ‘why didn’t you do it this way or that way?’ I did it the way I could afford to do it at the time. People have to realise this – anyone can look back and say that’s easy to do…

“With Brickfields, you’re always flying bythe seat of your pants, and I don’t think that will ever change. I remember one horror story regarding the actual construction of the main arena. We had the building sitting at the docks waiting to come over, and the Building Inspector said that the ground was not good enough for the building to be erected on.

“I phoned the manufacturers of the building and told them what the inspector was saying, and they promptly sent a professor from Oxford to the Island, who confirmed that the ground was more than good enough for the new building”.

Now, Phil and his partner Mary (he and Pam are now divorced but on friendly terms) are looking to upgrade Brickfields again, by extending the arena to bring it up to international size. They also have plans for a new heated viewing area, a re-vamp of the bar and restaurant area, more shelter and stables outside the arena, and a resurfacing of all the car park areas.

As Phil reflects, Brickfields has been a long journey, with many a twist and turn, and in a strange way the most important one is about to happen. “Brickfields desperately needs to be modernised in order to remain attractive both to the locals and to tourists” he says, “and if for any reason planning permission cannot be granted, then I suppose it could all possibly end, because without the investment and modernisation it will be hard to sustain the interest of both locals and visitors. I believe Brickfields needs the investment and I am willing to take yet another chance and go for this”.