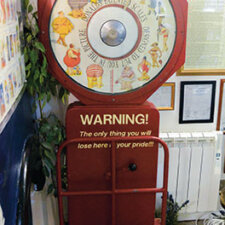 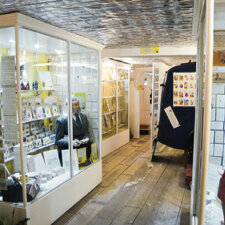 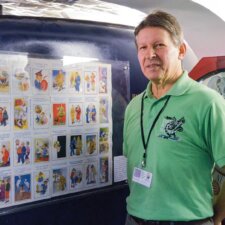 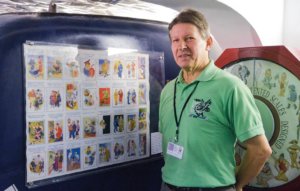 Tucked away in the basement of the Royal Victoria Arcade in Union Street, Ryde is a treasure trove of work by renowned English artist Donald McGill, whose name became synonymous with a whole genre of saucy seaside postcards from yesteryear.

McGill was born in 1875, died in 1962, and throughout his life produced an amazing array of postcards, that were displayed on stands outside shops in seaside towns up and down the country.

Significantly it was a display in Ryde that brought his collection to even more prominence when they were seized and temporarily banned in the 1950s for being a bit too risque.

Most people must have seen the type of postcards that McGill produced – the ones that parents smiled at without letting their kids see them, and in turn the ones that kids sniggered at, away from the gaze of their parents. They depicted everyone from attractive young women to fat old ladies, and drunken middle aged men to vicars, with an appropriate caption underneath always having a double meaning.

The museum is situated in what used to be the old Flea Market, downstairs at the back of the Arcade, and its walls, and even ceiling, are covered by such postcards, many of which are original stock from the 1950s and 1960s and still available to buy today.

But the originals are not so easy to come by. The vast majority have been sold individually at auction, often fetching several thousands of pounds. Ryde businessman James Bissell-Thomas compiled the interesting and amusing collection, and is the copyright holder of Donald McGill postcards.

Historic Ryde Society volunteers man the Museum, and chairman Brian Harris explained: “The postcard museum is part of the Ryde District Heritage Centre, which we also run. Donald McGill was a very innocuous looking chap who looked a bit like a bank clerk. He started drawing cartoons almost by accident; he did one for a friend who was ill, and it grew from there. 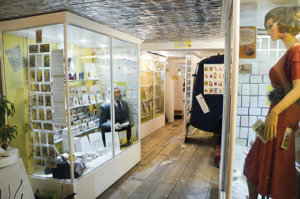 “He worked for 58 years, by which time he had published 12,000 different illustrations, mostly postcards. But his early ones weren’t at all saucy. Initially they were social history, looking at animals and people including suffragettes, as well as illustrations associated with First World War propaganda against Kaiser Bill, and Second World war propaganda against Adolf Hitler. He was basically an ordinary guy, painting life as he saw it.”

When some of his first ‘double entendre’ postcards started hitting the esplanades in the 1930s, no one really worried about them, because there was no censorship in those days. So in the 1950s he suddenly decided to re-publish some of the ones that had been around for many years. That prompted the Ryde upheaval in 1953, when the Council’s ‘watch committee’ raided five shops in the town and seized around 5,000 postcards, which they deemed to be offensive. 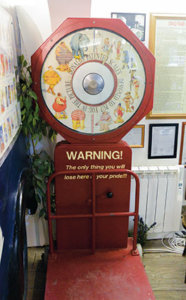 Brian continued: “That snowballed with watch committees in seaside towns all around the country doing their own ‘obscenity watch’.  There was a show trial in 1954 which resulted in McGill being sent to prison for about eight days. He defended his postcards by saying they were purely innocent pictures. I am sure many people who viewed them thought they were not quite innocent, but didn’t really know why, and didn’t understand the double meaning.

“Ryde is obviously the ideal place to have this museum, because it was the first town where the cards were seized. McGill is internationally famous, and there is still a tremendous amount of interest in his work. There were several other artists similar to McGill, but many of their works were more vulgar, and less acceptable.”

The illustrated Biography of Donald McGill, written by Bernard Crossley, is available to buy at the Postcard Museum. Also available is the collection of the 21 cards that were originally seized, along with three others that were saucy, but escaped the ban.