Gift of a course turned Andy’s life around

Gift of a course turned Andy’s life around 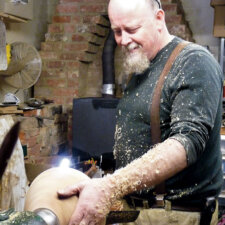 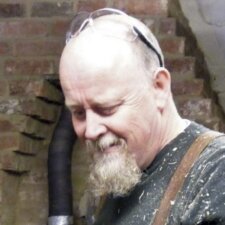 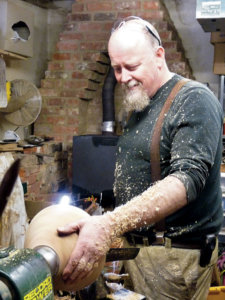 The gift of a two-day wood turning course in 1989 sparked an unexpected passion in Andy Fortune’s life – and ultimately led to his present career as an expert craftsman with some famous-name clients.

Now a registered professional turner and owner of the Mulberry Tree Wood Turnery in Arreton, Andy discovered how he could fashion bowls and platters from the most unpromising pieces of timber found lying on the forest floor or in friends’ wood piles.

“It’s amazing what can be made from even the most rotten and damaged piece of wood,” he says.

“In fact, the most stunning pieces can come from the most unlikely log, and it’s always a pleasure to find out what lies beneath.”

After attending that initial course in Derbyshire in 1989, Andy only managed to get a lathe of his own in 1996 – but from that moment on, it became clear that this was going to be more than a passing fad for him.

“I used to take the dog for a walk in the forest near where I lived in Ivinghoe, Bedfordshire, and I found a Beech tree that had been cut into logs and left in-situ. The logs were the ideal size for using on my new lathe, so I took a couple home and made them into bowls.

“This is when I discovered the beauty of ‘Spalting’, a natural figuring in timber caused by fungal decay. So I ended up over a period of weeks collecting the rest of the logs.”

The patterning and variations in colour that the Spalting causes can be very special. It normally occurs once the tree has been felled, and is part of the process that degrades and rots the timber. If however the wood is taken from the wet conditions found on the forest floor and then dried, the timber is stabilised and can be used for wood turning.

Having moved to the Isle of Wight in 2000, Andy originally worked as a plumber but by 2012, he decided the time was ripe for a career change.  After being accepted onto a government scheme for start-up businesses, he decided to take up wood turning full time. Hence The Mulberry Tree Wood Turnery was born, and opened its doors in January 2013.

Since then, Andy has been accepted onto the Register of Professional Turners and the Craft Council’s directory.  He’s demonstrated at the Ideal Home Show, made bespoke turned finials for Alan Titchmarsh’s boat house in Cowes, and some wooden boards for TV chef Adam Byatt that were used on the BBC’s Great British Menu programme.

In 2014 he moved his workshop to Arreton Barns Craft Village and over the last two years has steadily built the business, introducing timber sales and wood turning courses which have proved popular. The Mulberry Tree Wood Turnery is also the main IOW agent for Record Power tools and equipment, Chestnut Finishing Products and Robert Sorby wood working tools.

For more information, check out the website at www.mtwoodturnery.com, visit Andy on Facebook at www.facebook.com/themulberrytreewoodturnery or call the workshop on 01983 472696.