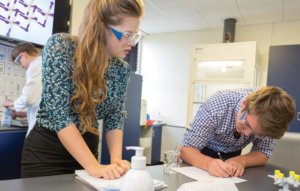 Where will our young Islanders be this time next year?

University application starts early at Ryde School. Of the applications, 50 per cent are sent by mid-October, and 90 per cent by mid-November. There are Lower Sixth Students already beginning the process of applying to the Sorbonne and to Maastricht for entry in September 2015.

Does this approach work? The answer is – a resounding yes! While sixth formers across the country may have only just made the January 15 deadline, Ryde School pupils are well ahead. Last year 92 per cent of students went to their first choice of university.

Joe Buckwell hopes to be at Exeter College, Oxford, reading physics. He said: “No matter how hard it gets, keep going and believe in your ability.” Ieuan Perkins (English at Lincoln College, Oxford) added: “Don’t compare yourself to other candidates – it is only ever going to be disheartening. Instead, read books that seriously push you, both in terms of form and language (Woolf and Will Self etc.) Stamina! It’s possibly the most gruelling process I’ve been through in my life! Don’t underestimate the value of keeping yourself sane.”

Rachel Brown, who hopes to read Natural Sciences at Kings, Cambridge, said: “Studying the IB helped me because it teaches you to think laterally and that’s what Cambridge is looking for.”

Amabel Richardson – Modelling and Special Effects, said: “Next year I’m hoping to go to either the University of Hertfordshire or the Arts University Bournemouth as I have received offers from both. I know it’s going to be great and take me one step closer to achieving my dreams.”