Dressage diva in the making

Home|Equestrian|Dressage diva in the making
Previous Next

Dressage diva in the making 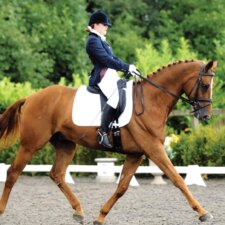 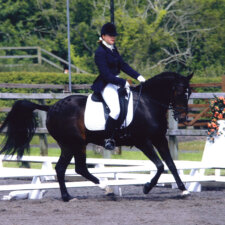 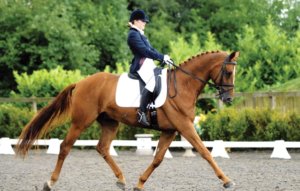 Gemma Maddocks from Apse Heath, simply doesn’t know how good she is when it comes to getting a tune out of a dressage horse. With several championships under her belt, plus qualifying for the Nationals, three consecutive times, 17 years old, Gemma has her sights set on the big time, and a plan in place to achieve it.

A diminutive 5’2, 17-year old who devotes all her time and probably that of her mother Denise, to riding, training and competing her two dressage horses, Gemma is quietly spoken, modest and calm. All the qualities you need to become a professional dressage rider. Having left school last year, Gemma now has time to ride both her horses six days a week, but, at the end of this year, she hopes to leave the Island and train at a top dressage yard on the mainland. “That way I will be taught at a high level, have the opportunity to ride other horses and compete at the right competitions to attract the eye of the Junior Young Riders selection panel,” she says quietly.

Gemma has followed in the footsteps of her parents, Denise and Michael, both of whom have ridden competitively in the past. Unusually though, instead of being plonked on an unsuitable hairy pony, as is often the case with horsey parents, Gemma was dispatched to her local riding school when she was seven. Tara, a 12-year old roan-coloured pony was the one she fell in love with, rather luckily as it turned out.

“I really liked riding her and asked if I could ride her more,” explains Gemma. “Then, one day, I asked Mum if we could even buy her? A few days later, I got home from school and saw there was a notice on one of our stable doors at home saying ‘look inside for a big surprise’. I opened the door and Tara popped her head out!” Secretly Gemma’s parents had already bought Tara and sensibly sent her to the riding school so that Gemma could get used to her before she went to live with them at home. Tara, now 22 and retired, still lives with the Maddocks.

Up until two years ago, Gemma had been very much an all-round rider, not particularly specialising in any of the equestrian disciplines. She enjoyed showing her next pony, Charm, with success, but, when Gemma was 15 and her parents found Ryan for her, she realised that dressage was really her thing.

“Ryan used to event and he does everything, but I’ve got more confidence doing dressage on him. I ride him at home at medium level, but he competes at elementary. We started affiliated dressage competitions as soon as I got him. He’s been my best pony.” With Charm still going strong, it seemed only natural that Gemma should start teaching her to do dressage too and they won the Riding Club Pairs at the National Championship at Lincoln last year with Jessie Vanassche. 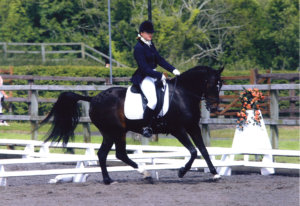 Once Gemma decided that dressage was for her, Ryan’s career went into overdrive. The two of them joined the British Young Riders Dressage Scheme (BYRDS), which is a group set up for riders aged between 12 and 25 where high quality, affordable dressage training is available.

The British Dressage website says, ‘If you have ambition and talent, BYRDS can help you make it to the top. You can enter our talent spotting scheme and our regional development officers are always on the lookout for riders with potential during regional training sessions to put forward for BYRDS national training viewing days. The next step up is getting on to a squad and our ultimate goal is to see you riding for your country.’

Gemma made it to the team and went to Ireland to compete. “It was my first competition with the team and there were only three of us as the fourth person was ill. We were 4th, 2nd, 1st and 6th in the elementary classes and Ryan was the Elementary Junior Champion. The team was fourth overall,” she says happily. It took two days of travelling, with Mum Denise and trainer Daryl Smith driving the lorry, to reach Ireland with another two days to get home to the Island after two days of competing.

Dedication is key if you want to succeed and Gemma, with the backup of her mother, make a very focused team. “I really enjoy all the hard work, because the results make it all worthwhile,” says Gemma who doesn’t seem in the slightest bit phased about riding in the international arena at a competition in Lancashire where Ryan was again crowned Elementary Junior Champion.

At 17, and showing plenty of talent, the time came recently for Gemma to look for a dressage horse which could take her a step nearer her goal. Three horses would be too many, so Charm was found a new home on the mainland where she continues her dressage with two small boys who think she is wonderful, and the word was put out that Gemma needed a serious dressage horse.

“My trainer Daryl Smith told me quite firmly that, as I am quite small, I mustn’t have a horse bigger than 16.1,” explains Gemma. But, when she talked to the person who was recommending a horse to her, she was told that he was the full 17hh – a big horse –a very big horse, for a 5’2 teenager coming off ponies. “I had to confess to Daryl just how big he was as we drove into the yard to see him,” laughs Gemma. But she liked him, really liked him and shortly afterwards Sandy (real name Wüstensand), a nine-year old Hanoverian warmblood, was installed in a loose box at Lake Farm Equestrian Centre.

“I knew that he was the one I wanted, in spite of his size. After I tried the other horses, I wasn’t really convinced, but I was really taken with Sandy and when I got on, it just clicked. He is trained to advance medium level (a pretty high level in dressage), but so far I have only competed him at medium,” says Gemma who is clearly delighted with her latest acquisition.

Gemma and Denise look after Sandy and Ryan together and Gemma trains weekly on the Island with Daryl Smith. But, every two weeks, the team decamps to the mainland for two days’ intensive work with top dressage trainer Nicola Jourdain. Nicola also visits the island once a month, so Gemma squeezes in another lesson with her then. During the week, riding is mainly schooling in the arena, but Gemma’s horses also hack out once a week.  Most weekends are taken up with competing, and recently Gemma secured sponsorship from Wightlink for her regular trips across the Solent, and for which she is very grateful.

“I want to ride professionally. My goal is to be riding at Grand Prix, have my own yard, have horses to train and sell on,” says Gemma firmly.

With 2012 Olympic Games looming, is this Island rider about to become a home-grown dressage diva? At the rate that Gemma Maddocks is progressing, it’s certainly in the making.