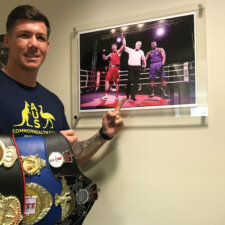 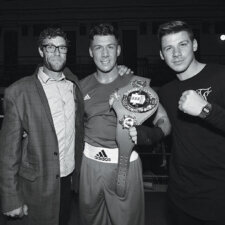 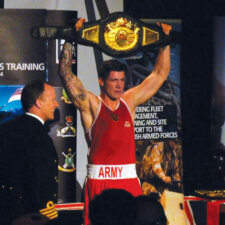 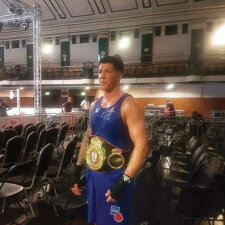 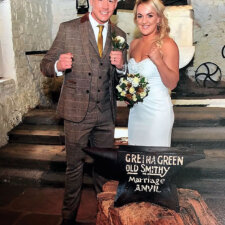 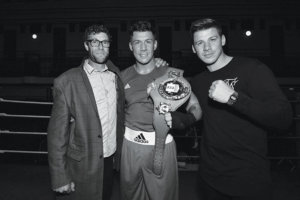 Almost 20 years of hard work and dedicated training have taken Island super heavyweight Chez Nihell right to the top in English amateur boxing. His latest triumph was winning the ABA’s prestigious England Elite Belt in May, which means he’s gone as high as he can go in the amateur world, and now stands on the brink of a professional boxing career. Jackie McCarrick spoke to the man behind the boxing gloves.

“Life was good, I was earning good money – but when I talked to guys in their 50s who were still working on the building sites, I began to ask myself if this was where I saw myself at that age”

Many young lads grow up wanting to be ‘just like dad’, and in the case of the young Chezerae Nihell, that meant tagging along with his father to train at Newport’s Phoenix Boxing Club.

His dad Asa Wingate is a painter and decorator by trade – but also happens to be a keen boxer, as well as a former National Hunt jockey and Joint Master of the IW Farmers’ Bloodhounds.

So, Chez and his younger brother Leon were literally brought up on boxing – which he describes as a ‘great way to get fit and channel energy’.

“People don’t always realise that boxing can be great for giving direction to young people” he says.  “Instead of going out drinking and fighting, boxing training builds self discipline.

“I wasn’t exactly the best of pupils at my school” he admits,  “in fact I was a bit of a class clown – but boxing gave me direction and focus that nothing else seemed to do.  And when you win, there’s no better feeling!”

He adds: “I guess there was always an element of wanting to prove myself to my dad, as well”.

Chez started at the boxing club while he was still an 11 year-old pupil at Bishop Lovett Middle School, training with his dad Asa and coach Derek Wolfe, and he was thrilled to get his boxing licence just ahead of his 13th birthday.  Meanwhile, he and brother Leon regularly enjoyed sparring as friendly rivals at home in Shorwell.

His first-ever fight was at Portchester Community centre near Portsmouth and he has a vivid memory of the occasion:  his opponent was a fellow Islander, from Ryde Boxing Club – and the already six-feet tall 12 year-old Chez came out as victor.  That feeling of being a winner would be one that he was destined to experience many more times in the future. 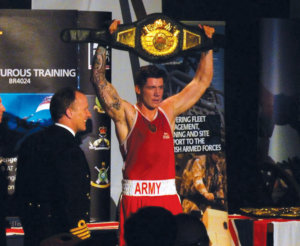 He didn’t actually have many more youth bouts, but once Chez reached 18, his boxing began to really take off.

By this time he’d left Ryde High School and had a job as a builders’ apprentice while working towards a City and Guilds in carpentry and joinery – but most of his free time was still spent training at the Phoenix gym.

His first big success came at 18 when – after winning three fights in the same week in Southampton, and against much older opponents aged up to late 20s – he won the Novice Southern Counties ABA Championship.

From there he progressed to the National Novice Championships, and managed to reach the quarter finals, competing against some of the country’s best up-and-coming boxers.

At 19, with regular coaching from Derek Wolfe and Andy Porter, he won the South West Area Champion title, and continued competing for his club in the Southern Counties ABA.

Life was busy on all fronts after Chez became a first-time dad at the age of 21, to daughter Molly May. By this time, he was working as a self-employed builder and juggling home life and gym training.

“Life was good, I was earning good money – but when I talked to guys in their 50s who were still working on the building sites, I began to ask myself if this was where I saw myself at that age”

The answer was clearly a ‘no’ – especially after Chez talked to his brother, who had joined the Army at 16.

“I saw the training Leon was getting and the way his horizons had been widened by getting off the Island” says Chez, “and I finally took the leap and joined the Army in March 2011”.

After basic training in Catterick he joined the 1st Battalion Princess of Wales’s Royal Regiment as an Infantryman, and following an initial posting in Germany, he was called up for five months of front-line action in Afghanistan over Christmas 2011 and into the following year.

It proved a worrying time for his parents, particularly as brother Leon was also serving in the battle zone, with a different company. 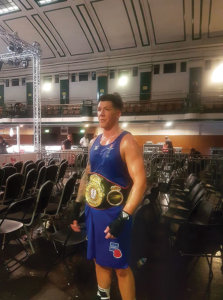 “It was certainly a different kind of Christmas and New Year” says Chez, “but that was part of the reason I’d joined up – to get a different kind of life experience”.  He came out of Afghanistan with a service medal, of which he says he’s “extremely proud”.

Of course another big reason for joining the Army was to benefit from the legendary boxing training it offers.

He was soon spending hours at the Battalion’s boxing gym with his head coach Cpl. Gavin Taylor, and having already clocked up over 20 fights as a civilian, Chez was given a week of trials for the Gold Squad Army boxing team, and was selected to begin the new season in September 2012.

At that point he became a so-called ‘tracksuit soldier’ – posted away from his Regiment to concentrate full-time on boxing – and over the past six years, he steadily progressed from Army level to representing England.

He’s managed to win the Combined Services Championship every year since 2013 (which means he gets to keep the belt) – but was constantly frustrated at falling short of winning the higher level ABA Championship title, which always remained his biggest dream.

“That was always the big one for me” he said.  “I’d reached the quarter-finals twice, the  semi-finals twice, and the final once. So every year I’d been on the Army boxing team, I’d got to the later stages – being so close and yet so far. It was frustrating because it was the one title I’d really wanted, ever since I was a little boy, and was always talking about with my dad.”

In 2015 there was another memorable triumph when he won the iconic Haringey Box Cup at Alexandra Palace – and shared his victory with his then partner (now his wife) Alanna, a fellow Army boxer who won the female light welterweight  title at the same event.

That pattern continued for three years, with Chez and Alanna retaining their titles – and in 2017 they were able to celebrate the rare distinction of being the first married couple to win gold medals at Haringey.

Having originally sealed their friendship as fellow boxers and team mates, Chez and Alanna had finally got together as partners in 2014.  They married in April last year, at Gretna Green, in a private ceremony that they managed to keep a secret from family and friends until after the event.

Alanna boxes for Northern Ireland as well as the Army, and this year she was crowned the first-ever female team captain on the Army team – a role that Chez had previously held for the 2015-16 season. 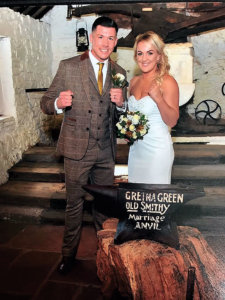 We do bring the best out of each other” he says. “Boxing can be a lonely kind of sport and when you’ve got your other half who totally understands the lifestyle and lives it as well, it’s definitely a big help.

One way and another, the past year has been a great time of reaping rewards for hard work.  Having clocked up 12 wins in a row, and having not lost a fight in over a year, Chez says he was beginning to get a good feeling about finally being within reach of his dream title.

Having won the annual Combined Services title for a sixth time and receiving the belt to keep, he progressed once again into the ABA Championship at London’s York Hall in April – and this was  his year to achieve the long-held dream, as he finally carried off the ABA’s English Elite title.

Winning the ‘big three’ title belts in amateur boxing left Chez with a big decision about where to aim next: as he says, it was a choice between hanging up his boxing gloves altogether, or going professional – and he’s decided on the latter option.

Now based in Aldershot and training at a professional gym in Guildford around his Army routine, he’ll be aiming for national pro titles – but he’s typically realistic about the hard work that lies ahead of him:  “I’ve had 67 amateur fights and have won the majority of them” he says, “but once I turn professional, I’ll be starting at the bottom again, as a novice pro”.

However, he’s already proved that hard work doesn’t faze him:  “Anything that I set my mind to, I will always put my all into it” he says.  “I hope to have my pro debut by the end of the year, and reckon I’ve probably got a five or six year window to make my mark”.

Meanwhile, Chez will be representing a new regiment when he next enters the boxing ring – the 27 Regiment Royal Logistic Corps to which he was recently transferred from the PWRR.

He paid special tribute to his old Army head coach Jason Browring, who he says has been ‘a huge driving force’ in his boxing success to date.

“I joined the Army as a club show brawler with a 50-50 record but Jason’s coaching made me into  team captain and took me up to Super Heavyweight” he says.

“The Army has really brought me on, and brought out the best in me as an athlete.”

Another person who he credits with having been a huge influence on his success is his mum Jo – always supportive, but never more so than when she helped care for his children Molly May and son Sonny, now six, while he was away on Ops in Afghanistan.

Chez and Alanna visit the Island every month and both  love catching up with family and friends and winding down on Ryde beach.

“I feel lucky to have my roots here” says Chez,  “and I never take home and family for granted, because they’ve always been there for me.”