Dip into the world of dabbling ducks

Home|Countryside|Dip into the world of dabbling ducks
Previous Next

Dip into the world of dabbling ducks 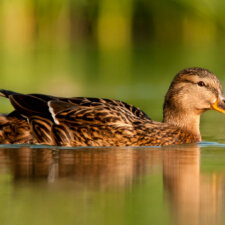 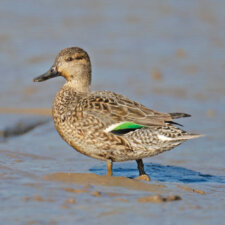 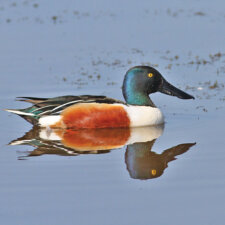 By the Hampshire & Isle of Wight Wildlife Trust

Ducks can be split into two broad groups: dabblers and divers. As the name suggests, diving ducks feed by diving underwater, using their strong feet (and sometimes their wings) to swim. Dabbling ducks, however, feed predominantly at the surface, sometimes even grazing on land. Head to your nearest water body and see if you can spot some of these delightful dabbling ducks…

The much-loved mallard is our most familiar duck, found across town and country. Feeding ducks like the mallard is a popular pastime and, for many, a first introduction to the UK’s wonderful wildlife. The breeding plumage of the male mallard includes a shiny green head, maroon-brown chest, yellow bill and curly black feathers just above the tail. Female mallards are brown and mottled in comparison to the male, and look so different that they were originally thought to be different species!

The shoveler lives up to its name – it can be distinguished by its long, broad ‘shovel’ of a bill. The male has a dark green head, white breast and orangey-brown sides during the breeding season. Females are mottled brown, but have a pale blue forewing. Shovelers feed by sweeping their large, flat bills back and forth through the water, filtering out small invertebrates, plant seeds and other plant matter.

Gadwall are a fairly common dabbling duck found throughout the year, the gadwall is only a little smaller than a mallard. They feed at the surface of shallow water by ‘upending’ – putting their heads down and bottoms up. Gadwall can sometimes be seen following coot around; after the coot has dived down to pick waterweed, the opportunistic gadwall will grab some for itself!

Teals are pretty little dabbling ducks, which can be spotted on reservoirs, gravel pits, and flooded meadows. They are our smallest duck; males are grey, with a speckled breast, a yellow-and-black tail, a chestnut-coloured head and a bright green eye patch. Females are mainly mottled brown, but both sexes show a bright green wing patch in flight.