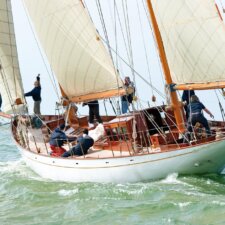 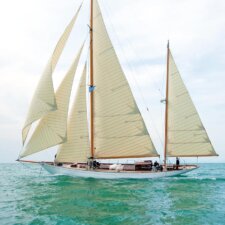 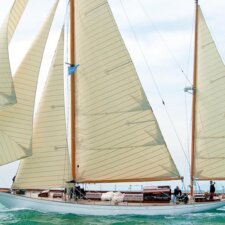 The Panerai British Classic Week will take place at Cowes from July 7 to 14.

There will be a five-race series, plus a race around the Island following the original clockwise course of the first America’s Cup. In addition to the exciting racing, there will be whole host of social events held in the sailing clubs of Cowes, including the prestigious Royal Yacht Squadron.

The regatta, which is part of the Panerai Classic Yachts Challenge, has been held every year since the America’s Cup Jubilee was held in Cowes in 2001. Entry numbers for the regatta have steadily risen each year, with over 70 boats entered in 2011.

Panerai was founded in 1860 when Giovanni Panerai, founder of the family business, opened the first watchmakers shop in Florence. The Orlogeria, opened in 1900, can still be found on the Piazza San Giovanni.

Soon after this, the Royal Italian Navy employed Panerai to provide them with precision instruments during the First World War, beginning the Panerai’s reputation for creating extremely reliable and accurate time pieces. The products delivered included luminous devices for sighting naval guns at night, giving Panerai’s signature watch styles, the Luminor and Radiomir, their names today. The watches themselves were created in the mid 1930s for the Royal Navy who required wrist compasses and depth gauges. After being extremely disappointed by the durability of watches available at the time, it was Panerai who was asked to develop a watch able to withstand extreme conditions.

This ethos still holds deep within Panerai and has been proven through watches such as the Arktos, developed for legendary explorer Mike Horn, and for numerous sailing timepieces over the years. In 1997, Richemont took over Panerai and improved the quality yet further, creating new timepieces and products.

Eilean, the stunning classic sailing yacht now owned by Panerai, started her life in 1936 in the hands of brothers James and Robert Fulton. Coincidentally this was also the year that the first prototype of the Panerai Radiomir was launched, a watch that had been specially created for the Royal Italian Navy.

After several changes in owner, in 1974 she finally came into the custody of French architect, John Shearer who had sailed on her as a child when his uncle was her skipper. Soon after, she famously featured in the legendary music video for “Rio” by Duran Duran which is still where most people associate her from today.

Then an accident involving a damaged ferry meant that Eilean was unsailable, and almost beyond repair, despite John Shearer’s attempts at a restoration. She lay amongst the mangroves in a dilapidated state until Angelo Bonati, CEO of Panerai spotted her whilst in Antigua for the 2006 Antigua Classic Yacht Challenge.

More than 40,000 hours of delicate work have led to Eilean once more becoming one of the most glorious ketch classic yachts on the water.