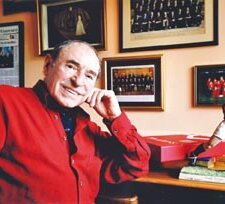 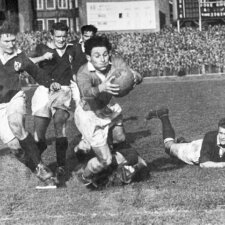 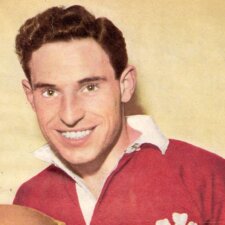 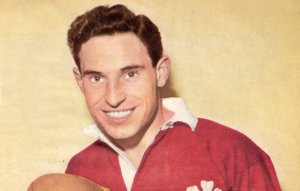 LEGEND is a term I never use loosely. Scoring a hat-trick at football or hitting a century at cricket makes for a good player, but not necessarily a legend.

However, there was no doubt in my mind that when I set off to interview Cliff Morgan for this edition of Island Life I was about to meet someone who undoubtedly befitted the terminology.

I was certainly not disappointed. Cliff, the former Wales Rugby Union captain, is not just a legend in his homeland, but throughout the whole world of rugby. He later became a highly accomplished BBC broadcaster and commentator; head of outside broadcast for the ‘Beeb’, and a founder captain of the ever-popular TV programme ‘A Question of Sport’.

But it was for his exploits on the rugby field that Cliff will always be remembered by those who were fortunate enough to see him play, and those who have subsequently viewed footage of his games since his retirement at the age of just 28 back in 1958.

He and his wife Pat moved to the Island eight years ago. Shortly after making their home in Bembridge, Cliff was diagnosed with cancer of the vocal chords, and he now has difficulty in speaking. But at the age of 82 he displays the same character, courage and determination that made him a rugby legend for his club Cardiff, and his country. 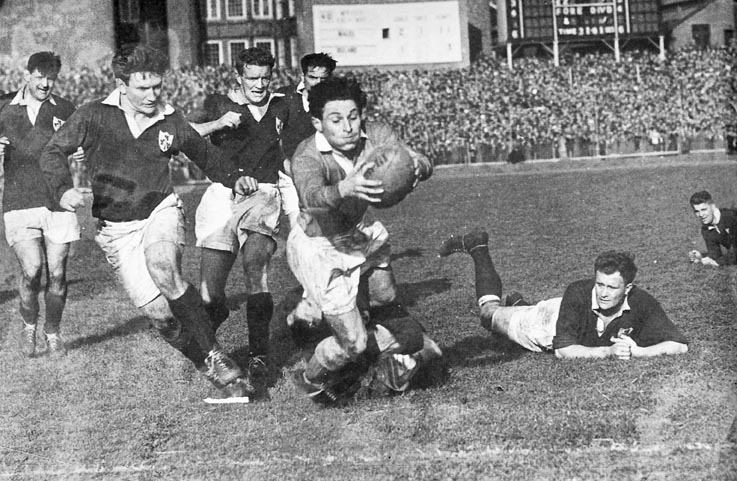 And he has lost none of the wit and charm that made him such a fine TV front man and after-dinner speaker. “I was once called a liar and a cheat,” he recalled with a smile. “And that was by the secretary of the Welsh RFU (Rugby Football Union).

“It was my first international match for Wales, and afterwards we had to queue up to pick up our expenses. “When it was my turn I told the secretary I was owed five shillings (25p) for my bus fare to and from the stadium. He looked down at his book for a while then he glared at me, and slamming his fist on the table declared ‘Morgan you are a liar and a cheat! I have checked the bus fare and it is only two shillings and four pence each way, so we owe you four shillings and eight pence – not five shillings’.

“The letter telling me I was to play for Wales for the first time had the word ‘reserve’ crossed out, and ‘selected’ in its place. It also reminded me to take my own socks from the previous game – but I hadn’t played for my country before. It went on to tell me to take my own shorts – or did I wish to borrow a pair.”

Cliff played in the days when rugby was truly an amateur sport. The only payments were expenses, and public transport was the only way to travel. Despite being just 5ft 7in tall, he was a giant on the field of play in his fly-half position. He came from a mining family and joined Cardiff Rugby Club straight from school in 1949.

In his school days he learned the ‘rights and wrongs’ of rugby, recalling: “I thought I did well when I won a game with a last-minute drop kick, only for the teacher to shout at me ‘rugby is about passing the ball not kicking it’. He dropped me from the school team for two weeks as punishment.”

Cliff won that first cap for Wales against Ireland in 1951, playing opposite his own hero Jack Kyle, and he was part of the Grand Slam winning Wales side of 1952. He was made Captain of Wales in 1956, but two years later, having made just 29 appearances for his country, he retired from the game.

I asked him why, and his answer underlined just how sport has changed. He said: “I had a family to look after so I had to go back out to work.” That was how it was in those days.

Cliff modestly claims he would never have been able to play rugby in the modern era because of his size and weight. “Everybody is so much bigger, stronger and fitter now,” he pointed out. “We trained twice a week in the evening, then went off for a pint of beer and a kipper, warmed up over an electric fire.”

But he has no regrets at missing out on the financial rewards that are on offer to players these days, saying: “I made so many good friends from all around the world, and we have had some wonderful reunions.” 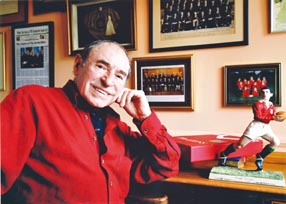 He joined BBC Wales as Sports Organiser in Cardiff in 1958. After a brief spell with ITV he returned to the BBC as broadcaster and commentator. In one interview with Richard Burton he got the Welsh screen star to admit: “I would have forfeited playing Hamlet just to have won one rugby cap for Wales.”
As a TV commentator he watched the next generation of Wales stars emerge – the likes of Phil Bennett, Barry John, JPR Williams, and the one he regards as the best he ever saw, Gareth Edwards. He commentated on some great games, recalling: “I once climbed right to the top of a very high commentary gantry and then realised I had left my programme behind. Thankfully I knew all the players, so I didn’t have to go back down for it.”

In 1970, he joined great friend Henry Cooper, who died last year, as the original team captains of A Question of Sport. In radio he found a natural outlet for his love of music, presenting for a time the BBC Radio 2 series These You Have Loved. He retired from BBC television in 1987, and returned to radio, and the following year was the subject of ITV’s This Is Your Life.

In 1974 Cliff became Head of Outside Broadcasts for BBC Television responsible for such programmes as Grandstand, Sportsnight, Match of the Day, Mastermind and national and sporting events including the wedding of Prince Charles to Diana, Olympic Games and World Cups.

After Cliff and Pat stopped working they were still living in the centre of London, but had no particular reason to do so. On one visit to Singapore, Cliff suddenly announced: “I never want to travel again!”

So they decided to leave London behind, and made the Island their intended destination. They found their dream home in Bembridge, put in an offer that was accepted, and sold their London flat. But two months later the Island home was taken off the market, so after searching in vain for an alternative Pat decided they should look elsewhere. Her comment was met with a sharp response from Cliff who said: “I am hooked – I want to live on the Island.”

Thankfully for them, their original choice was soon back on the market, and this time the deal went through without a hitch. He had been made patron of Ventnor Rugby Club some 25 years earlier, and discovered soon after he moved here that he was still patron, and has maintained close ties with the club.

It all began when he agreed to speak at a club dinner on a Friday and then had to make a mad dash via a tiny boat across the Solent and then by car to Aintree for the Grand National. The older members remembered him well for he tipped the winner of the National, Rubstick, which came in at 66 to 1!

Cliff says: “I have been lucky all my life. We love Bembridge, and we love the whole Island. The one thing we noticed when we came here was how friendly everyone is. Bembridge is a wonderful place to live. We have our own bakery for fresh bread, a butcher’s shop with wonderful meat, an excellent fishmongers, an equally good farm shop and a lovely deli.

“It is nice to live by the sea, because when I was in Wales as a young boy we saw the sea once a year – a chapel trip on a double-decker bus to Barry Island. I love it here on the Island. Everyone greets you with a big smile and the sun always seems to shine – particularly when Wales win the Grand Slam!  What more could an old man ask for?”