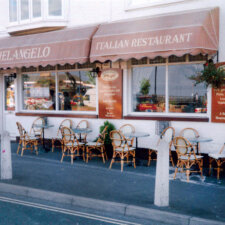 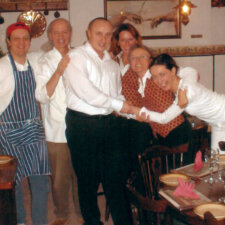 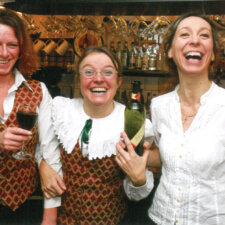 It was a song that led them to the Isle of Wight two decades ago – and since then, a combination of music, food and wine has helped them to create a little slice of Italy here in Ryde. As husband and wife restaurateurs Anna and Dante Sacchini and their business partner Rosanna Pancot prepare to celebrate their 20 years in business, Jackie McCarrick has been discovering their story.

The new millenium ushered in a huge change of life for Anna, Dante and Rosanna, who up until that point had all been working as teachers in their home towns of Reggio Emilia and Padova, in the north of Italy.

Ripe for an adventure, the trio decided to take a sabbatical and headed for England without any firm plans for their future – but with a particular curiosity to visit the Isle of Wight, which they’d heard about in the lyrics of a popular song about the IW Festival.

“We’d been to England on holiday before but never the Island” said Anna.

“The song lyrics had something about everybody on the Island having a light in their eyes and a sparkle to their face and I suppose you could say we followed that dreamy vision of the place”.

They certainly weren’t disappointed, though, as Anna recalls:  “I was completely bowled over by the beauty of the landscape and especially the lovely villages and thatched roof houses, which are totally different from anything we have in Italy”.

They also appreciated the Island’s milder climate and laid-back culture, and it wasn’t long before they noticed there might be an opening for an Italian restaurant.

While none of them had any experience of running a restaurant, what they all DID have  – in common with many Italians – was an experience of their own traditional “Mamma’s cooking” back home.  And it was this authentic cuisine that they thought might attract the Island’s locals.

So, when a former English restaurant in Ryde became vacant, they decided to trust their instincts, and took the plunge by opening up as Michelangelo’s in February 2000.  Starting as a manageable 35-cover restaurant, it was named in honour of the Renaissance painter, giving a hint of the classical and cultural influences that the partners would go on to develop.

“We had no formal experience and relied totally on our family traditions” says Anna.  The three of them pooled their family recipes and ran the fledgling operation themselves, with just the part-time help of a native English speaker front-of-house.

For the locals, the small menu of Emilia-Romagna recipes and authentic ingredients  were something new to try – and many of those early customers remain enthusiastic regulars at the place to this day.  In fact many are now second-generation, having first been taken there as children and now taking along their own young families.

What marked out the restaurant was its authentic Italian cuisine – with no place for fish and chips or steaks. It might have driven a few traditionalists away, but most people loved it – and not just for the food, but the ambience, which developed over the years to include candle-lit musical evenings and wine tastings.

“Our aim was always to be genuinely Italian, and that’s the way we have kept it” says Anna.  “We still make all our own sauces, in the way our mothers did, and we use a specialist supplier for Italian ingredients, combined with fresh meat, fish and vegetables which we source locally.

“Some people have developed a stereotype of Italian food that comes from all the big restaurant chains, so they are sometimes surprised when they taste the real thing!”

This is where the partners’ previous lives in teaching have come to influence them as restaurateurs.  In fact they see themselves not just as chefs (and they all do still cook in the restaurant) but also as a kind of ‘educators’ on the subject of traditional Italian cuisine. And customers – who Anna actually prefers to refer to as friends or guests these days – love to ask advice on what goes with what when choosing from the menu.

For the record, Anna says that, for instance, an Italian would never pair Parmesan with fish!

As the popularity of the restaurant grew, the decision was taken in 2011 to expand, when the old Tourist Information office next door became empty.  They doubled the size of Michelangelo’s at a stroke, and as part of the expansion, created their popular deli-cafe to one side.

This created a unique retail outlet for authentic Italian imported goods that sell all year round – and literally fly out of the door during big celebration seasons such as Christmas and Easter, when Michelangelo’s runs its popular markets.  Meanwhile the cafe serves coffee, snacks and lunches during the day and then becomes part of the main restaurant in the evening.

It’s been an ideal way to maximise the space and expand the authentic Italian food and drink offering.

And in 2015 Michelangelo’s attracted national recognition when the restaurant critic AA Gill named them in the Sunday Times magazine as the first of the three best Italian restaurants in the UK. He had made an incognito visit during the summer, much to the partners’ later surprise.

“We knew nothing of it until some customers turned up at the restaurant with a copy of the Sunday Time magazine, all excited to give us the news!” said Anna.

A side order of culture

Offering a taste of the culture that lies behind the food has always been a big factor in the restaurant’s popularity, which is why they enjoy taking every opportunity to celebrate with music, food and wine.

As a musician and skilled harpist herself, Anna has organised a harp festival in Ryde since 2014, which features a harp dinner in the restaurant as well as concerts and workshops around the town that attract music students from around the world.

“This is the value that a restaurant can have, as a point of meeting and exchanging ideas” she says. “I love having the opportunity to host cultural events and feel really proud of what we’ve achieved here”.

Celebrations for the restaurant’s 20th birthday kick off over the weekend of February 21-22 with two wine-tasting dinners that will feature the cuisines of different regions of Italy, with a wine host to explain and introduce the wine choices for each dish, and entertainment from an Italian harpist.

Not surprisingly, tickets have been greatly in demand and there aren’t many left.

But anyone who misses out will still have a chance to help celebrate Michelangelo’s big milestone, because a number of other celebrations are set to be rolled out at the venue over the rest of the year.

“We have a lot to celebrate and to be thankful for” says Anna.  “We are very proud of how far we have come, but also are very grateful to all our customers who have grown the business with us.

“The way a restaurant is shaped owes a lot to its customers – and in fact, we prefer to call all those people who have helped us to reach this place, not just ‘customers’, but our guests and our friends”.