Captured by a butterfly

Home|Features|Captured by a butterfly
Previous Next

Captured by a butterfly 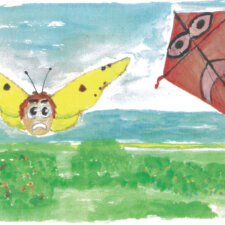 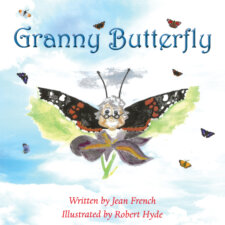 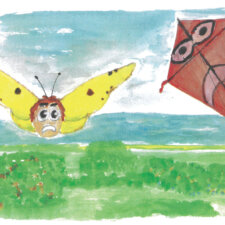 Butterflies have always held a special significance for Newport-based Jean French and her family – so when she decided to write a children’s story book, there was never any doubt about who the main character would be.

Granny Butterfly is the title of her first book – and the magical winged creature has so captured Jean’s imagination that she is already writing book number three!

As a first-time author at the age of 74, Jean says she’s thrilled with the warm reception that her book has received since going on sale on Amazon, and in several Island bookshops.

So what made her take up her pen when most people are content to settle into retirement?

“It came completely out of the blue” she explains.  “I was sitting on the beach at Sandown with my husband Roger last year, just looking up at the sky, and suddenly I announced that I was going to write a children’s story.

“He immediately said why not make it about a butterfly, because my mum Evelyn, who died 20 years ago, always used to say she would come back as a butterfly”.

That was all the prompting Jean needed, and thus her story writing began.

She explains that mum Evelyn was buried in a woodland burial site at Arreton, and when her children, grandchildren and great-grandchildren began visiting with flowers, they always said they were going to see ‘Granny Butterfly’.

In the book, Granny Butterfly appears as a beautiful Red Admiral, and among the other characters Jean has dreamed up for her series of adventures in Honeysuckle Meadow, there’s Bertrum the Clouded Yellow, Besty a little Blue, Boris, a Purple Emperor and Bella the Peacock.

Jean has enlisted the skills of amateur illustrator Robert Hyde, a golfing pal of her husband’s, to produce exquisite watercolour images of the various butterflies.  She says she hopes this will help young readers to learn to identify the different varieties.

Not surprisingly, the book carries a dedication to Jean’s mum, and she describes a strange coincidence that has convinced her she has her mother’s ‘blessing’ for the project.

She and Roger were on a two-month cruise in the middle of the Caribbean earlier this year when she noticed that after her gym workout, a butterfly had settled on her water bottle and showed no sign of flying away even when she picked the bottle up and carried it back to her cabin. The next day, the butterfly was still there, happily drinking the water.

Then there was the fact that the day she received the first proof of her book, would have been her mum’s 103rd birthday. 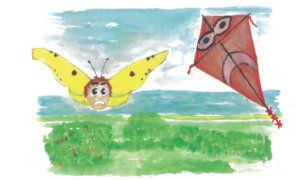 On April 8, Jean was doing a book signing of Granny Butterfly at Waterstones, although by then, she was already well into planning book number three, and with lots more ideas for extending the series with further butterfly adventures.

She laughed that artist Robert was going to have his work cut out keeping up with her.

Although the books are aimed at readers aged between 5-8, the stories are also ideal for bedtime reading to younger children, with their bright and cheerful themes and pretty illustrations.

For Lancashire-born Jean, who arrived on the Island 42 years ago, the books are opening up a whole new chapter of her life.

“Everybody in the family says they can’t quite believe it” she says.  “The stories just seem to flow and I don’t go anywhere now without a notebook to jot down the ideas as they come to me.  Apart from having bought myself a handbook of butterflies just for reference, it’s certainly not something I need to work very hard at!”

As well as being available on Amazon, the book is also in half a dozen libraries in the UK, and is also available at Ryde Bookshop and, aptly enough, Butterflies Cafe in Yarmouth.