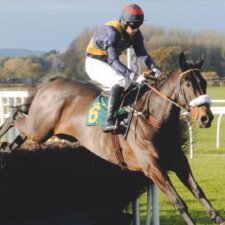 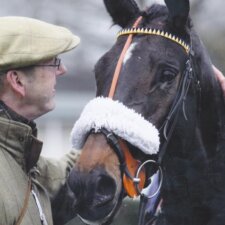 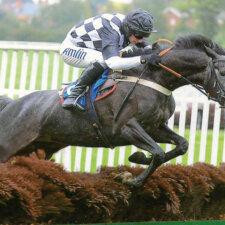 Chris Guy admits he learned about horse racing the hard way. When he first became interested in the sport of kings, he gambled far too much and his own princely ambitions soon turned sour. Then when he decided he wanted to become a part-owner of a race horse, his dreams of success were dashed when his four-legged friend had to be pensioned off.

But Chris is a determined type, and since then he and his wife Jenny have continued their pursuit of race horse ownership with a great deal of success. So much so in fact, that Chris is quietly confident that in the not-too-distant future he could be watching his pride and joy ‘Buffalo Bob’ running in the world famous Grand National at Aintree.

Buffalo Bob is a great grandson of former Derby winner Roberto, ridden by the legendary Lester Piggott. ‘Bob’ is at the stables of Kim Bailey near Cheltenham, and has already shown the pedigree to become a top class distance steeplechaser.

The horse made its Aintree debut in the pre-Grand National Topham Chase, only to see the adventure ended at the eighth fence when another faller distracted it, and he unseated his rider. But Chris remains confident he has a horse capable of not just taking part, but eventually winning jump racing’s most famous event.

Chris explained: “My interest in horses began in 1972 when I was working as a kitchen porter, and someone asked me if I was going to have a bet because it was Derby Day and Piggott was riding Roberto. I backed it and it won. How strange that I now part own its great grandson.

“After that win I started betting big time, but often lost all my wages by the end of the week, so I learned the best way – the hard way! I still have a bet, but I stopped being a big gambler when I became a family man, because they came first and I couldn’t afford it.”

After a divorce he met Jenny, who shared a passion for racing, and they had the occasional conservative bet. Then Chris met a friend who had bought a share in a race horse, and he was invited to join the syndicate – £400 for a share of the horse, and £80 a month training and stabling fees.

“I joined it but soon found to my cost it was not a good move. I visited the stables and saw the horse had one leg all bandaged up, and it never did race. I pulled out of the syndicate, but that was also a costly mistake,” he recalls.

Undeterred, he sold his boat to take a £5,000 share in a horse named Bally Conn, which won first time out at Towcester, and then suffered a back problem, but recovered to win four more races, and is now in happy retirement in Devon.

Jenny and Chris have had shares together and individually in several more horses including the aptly named The Good Guy. In all they have had 13 winners, including three by Jenny’s horse, hurdler Ixora – one of them at Cheltenham – and three by Buffalo Bob. Their other current horse in Bishop Hill Jack.

Chris continued: “As soon as I saw Buffalo Bob I thought it was a stunning horse – a winner if ever I saw one. We had just bought a share in The Good Guy, but Jenny realised how much it meant to me, and told me to ring Kim to see if there was a share. There was, because someone who was also interested decided not to take up the offer, and I was told I could have it – for £10,000!

“So I bought a quarter share in Buffalo Bob four years ago, and he is now eight. I had to wait two years before he won a race, but the trainer kept telling me to be patient, and he was right. After running in hurdle races to build him up, the first time he went over fences he won.” 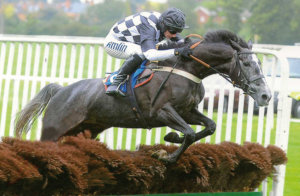 Buffalo Bob, who stands more than 17 hands, is usually ridden by Jason Maguire – winner of this year’s Grand National on Ballabriggs – or Sean Quinlan, another accomplished jockey. Trainer Kim Bailey recently wrote of the horse: “He ended the season in the Topham Handicap Chase at Aintree, and looked to be enjoying jumping those big fences until a novice mistake caught him out. We are very keen to go back to Aintree, and long term Buffalo Bob could well be a Grand National horse.”

Buffalo Bob, a recognised front runner, has also had three runners-up spots to add to his three victories – the most notable win to date coming at Newbury, a Grade One course. He runs about six times a year, with everything still being geared to a shot at the Grand National – either in April or the following year.

Chris admitted: “It would be daunting to see Buffalo Bob running in the National, because my stomach was churning watching him in the Topham Chase. Obviously you get a bit worried because it is a race where horses can get injured. But I think it would be great for the Island, knowing someone who lives here is the part owner of a Grand National runner, and hopefully a Grand National winner.”