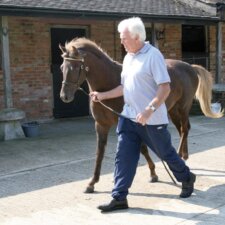 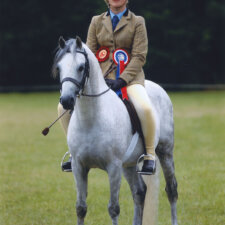 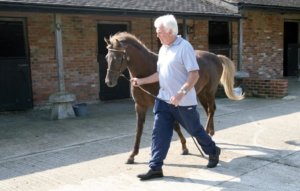 Quietly, ever so quietly, the Longstone Stud has been making waves in the pony world. Pick up the stud book and you will find this relative newcomer has from the first been associated with champions and supreme champions. Thumb through back issues of Horse and Hound and you’ll see the name behind Longstone: Brian Morey. His success is remarkable because he is a hobbyist, rather than a professional breeder – but that is not all. Mr Morey comes from a world which had nothing, nothing whatsoever, to do with horses.

“I’m not Mr Morey, I’m Brian,” he corrects me firmly. “I won’t call anyone ‘Sir’ and I don’t want them calling me ‘Sir’. That’s the only way I differ from my father.”

Brian was born and brought up in a council house in Gunville, an area considered so low that he didn’t meet some of his cousins until he was in his thirties – the family had been split when his mother married a Gunville man. His father was a carpenter, and his mother kept house – for her five children, gran and grandfather, and her two brothers-in-law. “My sister couldn’t go to bed till the rest of us did. She slept in the front room (they say ‘lounge’ now, but it was always the front room to us), her head one end, gran’s head the other on the bed.”

Simply feeding such a household required ingenuity and resourcefulness – pigeon and rabbit, shot with catapults were staples, just to have a dinner on the table – so Brian found himself earning from the age of 10. He holds out his large, capable hands, now slightly shaky since a severe illness, and says: “I was born to use these, I was born to work, we all were.” His surroundings testify to his success as a builder. Blacklands Farm, where he lives with Sue, his ‘diamond’ of a wife of 25 years, is in an idyll of quiet repose where the moorhens flap on the carp-filled pond.

“There’s boys down in Gunville who grew up with me, won’t come down my lane, because they thinks I’m a big ‘I Am’. I’m not, I can assure you I‘m not. I’m exactly that bloke who grew up in Gunville.”

He obviously minds about being misunderstood. Fairness has been his motto throughout his building career, and his professional and personal reputations have been built on that. His egalitarian attitude which has bridged the gap between Gunville and the pony world was forged when he, as a “nipper”, worked for the father of David Biles [the former high sheriff], feeding pigs and cattle, and was paid in sweets. “A few years ago I was introduced to David’s sister, Joyce. I said: “d’you know Joyce, the last time you spoke to me? You were a young girl up on your pony. I was a young boy. Your last words to me were ‘Daddy, remove Morey from the yard, he swore!’” Brian bursts out laughing, as indeed Joyce did when reminded of the story. But his view that there is no such thing as social status is set in stone. “After that, for me to come into the horsey world, it was quite something!” He is indebted to his friend Ken Gill of the Pony Club. “He helped me because I knew nothing about it. I knew about chippying and playing football. Mad Morey they called me on the pitch!” 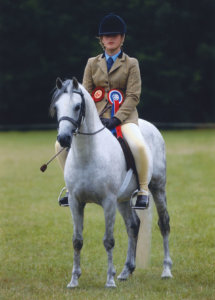 His interest in ponies began when his first son rode as a child, and when he decided to take up breeding it was typical that quality was top of his agenda. He asked his good friend Sheila Monk (“the Rt Hon Sheila Monk, but we are Sheila and Brian”) of the Yaverland Stud for advice. “She told me to go to the Rotherwood Stud, near Ashby de la Zouch, and to the Downland Stud, and get a pony from each,” says Brian.

Rotherwood was his first stop. He saw a beautiful colt foal, but was strongly advised to get a two-year-old. In the end they did a deal and he had both. But he is happy to admit that the expert had been right. When he took them, at a year and three years respectively, to their first show, the South of England, the yearling came in fourth. “That was good, I was happy. And then the other one – first! I ended up reserve champion! Sue said I went white, like a ghost!”

That was just the start. The following week, Brian took his ponies to the Southern Counties. “I was overall champion!” He recalls the attention of the paparazzi: “Click click click! I was in Horse and Hound!”

Meanwhile, he had the other recommended stud to visit, Downland, and there found Clementine, a beautiful filly who was in foal. “And she bred me seven top champions, one after the other!”

As an outsider breaking in, Brian’s take on being in ‘the circle’ is interesting. He compares the horse world to any other, like dog and cat breeding – “you have to work your apprenticeship to find out all the pros and cons.” He had just won Supreme Champion at Yeovil, but at the next show he was warned against entering because the show was being judged by a certain woman who was notorious for her particular obsession. “You’re too light boned for her, she’s bone!”

Brian went ahead and entered, making sure he led the pony quickly to ensure they would put on a fantastic show, but despite having won ‘all over the shop’ that season, he was marked down. In giving out the rosettes, however, the judge took pains to explain why she had marked the animal down despite its obvious quality. “I’m bone first,” she explained.

That was a while ago, and Brian is wised up to the whys and wherefores of judging. “Others go for movement, but if the pony has no manners that counts for nothing.”

For Brian, the most important thing is temperament. He is breeding ponies for children and needs to feel that a six-year-old child would be safe in a stable with one them. His days of being a novice breeder are long behind him, yet he is still ploughing his own furrow to some extent. “I breed Welsh section B ponies, which I breed to keep the height – they are 13.2 hands high – but the money is in little kids’ ponies that can see a child through from four to 12 years old. A 13.2 pony might only last a child a year. But when I qualified for the Horse of the Year show, and couldn’t make it because of my heart condition, the judge requested I came back another time. She said we need more ponies of this height.”

Ponies in the B-category are pretty, so appeal to children, but ‘go like ferries’, according to Brian. A-category ponies are small, but bolshy, and Brian doesn’t like the practice of crossing the breeds, as some do, to keep the size down. “They get sold to wealthy people looking to buy ‘lead in ponies’ for their children. But an A and B cross is the worst mix. I always think ‘there’s a kid going to get on that!’”

If it sounds as if Brian isn’t taking the most businesslike approach, that’s correct. He doesn’t breed to sell. “I like to find good homes for them,” he says. “That’s my pleasure.”

Hard work and fair play have made Brian Morey a contented man.