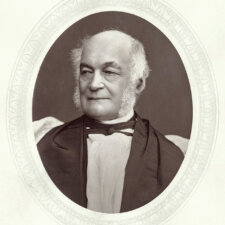 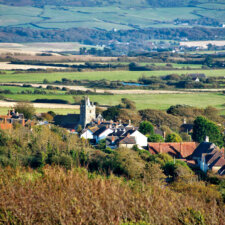 It might sound just like an unusual name for a traditional village pub – but in fact, The Three Bishops Inn in Brighstone commemorates three Rectors of the parish who went on to become Bishops in the Church of England. 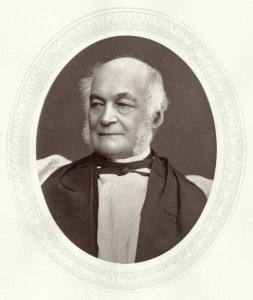 Before coming to Brighstone, Moberly was a successful and influential Headmaster of Winchester College and during his years there, he and his wife Mary Anne produced a truly Victorian family of 15 children. But in 1867, at the age of 63 he decided it was time to move on, and accepted the living of Brighstone. Although by now several of his children had careers or spouses and sadly one daughter had died as a young adult, a substantial number of the Moberlys remained to settle in the Brighstone Rectory: as daughter Annie noted, ‘Our crowd is a great excitement to the village’.

Although the people of Brighstone were mainly ‘Dissenters’ – that is, chapel-goers, rather than members of the Church of England – they were nevertheless friendly and welcoming.

To the newcomers from the mainland, Brighstone was strange territory, a lonely village lying on a wild, dangerous stretch of coast avoided by shipping, and with only the occasional ocean steamer visible on the horizon. But there were compensations.  In September 1867, the family admired ‘a most glorious sunset over the sea. The colouring was magnificent, and a long golden glistering path of glory lay on the sea, with St Alban’s Head just visible in a bright mysterious haze. The pools in the rocks and the sands had turned crimson and purple’.

Also they were enchanted by ‘the Isle of Wight luxuriance of flowers’, including a nine foot-high fuchsia tree and ‘myrtles [which] climb to the top of the house.’  They learned that it was a tradition for the Rector to burn a myrtle log every Christmas.

The Christmas holidays of 1867 brought an additional 12 family members as visitors to the Rectory, causing Mary Anne Moberly to declare “the house must learn to hold us all; I will never tell any son or daughter when they offer to come home that there is no room for them.”

Soon after the party arrived, the Island was swept by a great gale, which did not deter the Brighstone lifeboat crew (to which early every man in the village seemed to belong) from a scheduled practice. ‘It was a wonderful sight’, recorded Annie. The boat entirely disappeared between the boiling waves and then rode up high on the top of them.’  Safely indoors, the family and their neighbours enjoyed ‘a regular Christmas rout’, meaning a large, and perhaps noisy, party, with activities including ‘three very successful tableaux.’

Tableaux vivants – quite literally ‘living pictures’ – were an important feature of Victorian home entertainment, and especially enjoyed by the Royals at Osborne and Balmoral. Participants would choose a theme such as The Seasons, a historical event or a work of literature, and then adopt suitable costumes and poses, keeping still for as long as possible so that the audience could admire the effect. The star of the Brighstone show was 16 year-old schoolboy Walter Moberly  as Shylock in a scene from The Merchant of Venice, after hours spent perfecting his make-up and costume.

Shakespeare’s play also featured in ‘the first penny reading ever held in Brighstone’ that Christmas. Penny Readings were immensely popular during the 1860s. In a remote location like Brightone, however, they had never been heard of before, and the attendees did not really know what to expect: indeed, one stalwart turned up with his Bible, prepared to hand it around to readers! In fact the format of the penny readings (the entrance fee was designed to exclude the dregs of society while making culture available to the relatively hard –up) was a varied programme of verse, readings and sometimes songs. Besides the trial scene from The Merchant of Venice, the Brighstone Christmas session included a rendition of the supernatural Irish folk tale Daniel O ‘ Rourke ‘which will not soon be forgotten.’

Soon George Moberly was destined to be ‘hoisted’ as the locals put it, through the ranks of the Church of England to become Bishop of Salisbury.  In their relatively short stay from 1867 to 1869, the family brought life and colour to the village, and when they left they took with them ‘enough affection and good wishes from everyone to last them all their lives’.