A golden summer of song

A golden summer of song 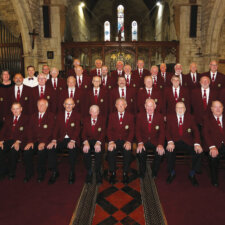 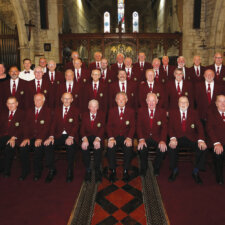 One night in 1967, a group of men dressed in smocks, gaiters and fake beards, gathered at Newchurch village concert to make music and entertain at their first ever public performance.

Calling themselves the Hart’s Ash Male Voice Choir, they were men from the local area, drawn together through a shared passion for song and companionship.

Now, 50 years on, the name has changed and the smocks are long gone, but members of Newchurch Male Voice Choir still entertain, albeit in a slightly more serious manner.

This summer, to celebrate their milestone Golden Jubilee, they are planning a special concert at Medina Theatre.

The ‘Golden Jubilee Serenade’ on August 16 will include songs the choir has sung over the last 50 years, from popular favourites such as Rhythm of Life to more traditional numbers such as Morte Criste. Joining the choir will be a variety of Island guest artistes, including First Act Theatre, violinist Nancy Filby-Borrett and soprano Harley Mackness.

Over the past 50 years, the choir has raised tens of thousands of pounds for charities including the Hampshire and Isle of Wight Air Ambulance, RNLI, Action on Hearing Loss, IW Society for the Blind and many more. It has also produced two albums, the second of which marked the 40th anniversary, and members even performed on the main stage at Bestival in 2009. The choir has also been invited to sing with Aled Jones at the Isle of Arts Festival in Ventnor, and can even claim to be the first non-Cornish choir to have performed at the Eden Project.

As well as singing at venues across the Island, the choir has toured to various places around the country including grand historic venues such as Bath Abbey, Christchurch Priory and Winchester Cathedral.  It has also given concerts on the Island together with choirs from Wales, Cornwall and Australia.

In 2001 Roy Bevan, who has been a member of the choir since 1982, agreed to act as its ‘caretaker’ conductor until a new MD could be found – and he’s still ‘caretaking’! In 2015 the choir was joined by the talented Cate Clark as its accompanist.

Numbers in the choir have increased from about a dozen in the early years to around three times that number today, and new members from across the Island are always welcomed.

The repertoire ranges from traditional male voice songs, through numbers from the musicals, and modern pieces such as New York, New York and The Wind Beneath my Wings. There’s no requirement to be able to read music or have any previous singing experience – just a willingness to join a friendly bunch of people and make music together.

For more information on the choir visit their website at www.newchurchmvc.co.uk. You can also contact the Hon Sec on 01983 402327 or e-mail:newchurchmvc@yahoo.co.uk.