With a song in his heart

Home|Interviews|With a song in his heart
Previous Next

With a song in his heart 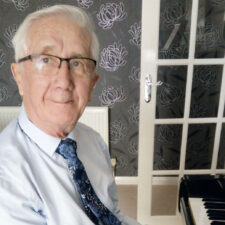 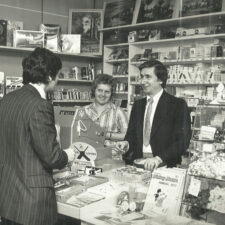 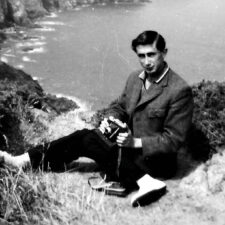 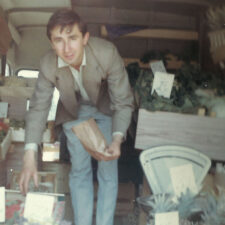 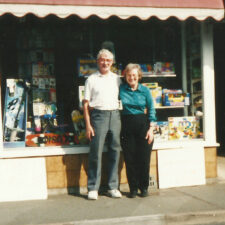 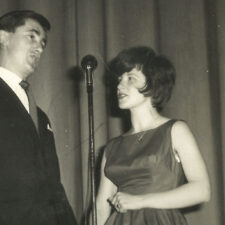 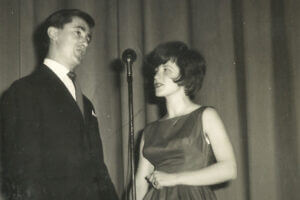 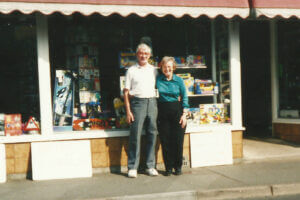 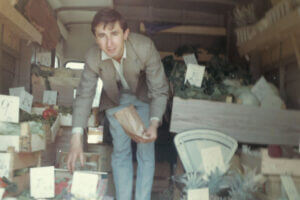 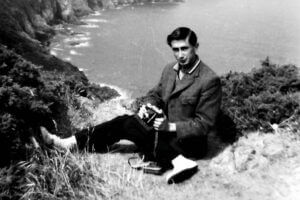 His first encounter with the Isle of Wight was as a poorly little four year-old, packed off from his family in war-ravaged London and sent for convalescence at St Catherine’s convent in Ventnor. Little did Bob Clarke know then, but half a century later in 1991, the Island would become his home, when he uprooted from the mainland and took on a well-known toyshop in Freshwater. Now 85, Bob reflects on a full and eventful life, his love for the Island – and reveals how he still puts his famous singing voice to good use whenever his spirits need a lift.

Bob’s childhood sounds like a horror story these days, but he is from that gritty generation of the late 1930s and 40s, who seem to have been formed of stronger stuff.

Although a physically delicate child, unable to put on weight and plagued by chest infections, his mental strength got him through traumas that most adults would struggle with.

Born in Fulham, the eldest of four brothers, Bob was aged just three when the Second World War started. The street where the family lived was bombed, and his grandmother earned the sad distinction of being the first civilian to be killed in London. Not long beforehand, the rest of the family had been evacuated from the city, just a day before the Blitz.

Bob’s poor health saw him constantly in and out of hospitals and convalescent homes, but his clearest memory is of being taken by his mother to Portsmouth, where he was collected by a nurse and ferried across the Solent.  Unbelievably, he didn’t see his parents again for 18 months.

He holds on to fond memories of being taken on beach and countryside walks by the nuns  – but there’s also a much darker memory when, on one of the walks, the children had to be hurriedly thrown to the ground by the nuns and covered with their black cloaks, after an aircraft was shot down and the crew had to bail out by parachute right above their heads.

At the age of five, he was on the move again when he was evacuated to Exeter along with his three year-old brother George.

“What with all the time in hospitals and being evacuated, I didn’t actually spend much time with my parents until I was 16”, he recalls.

A life of work

Bob’s dreams of a career at sea as a ship’s steward floundered because of his asthma, but typically undaunted, the 16 year-old Bob got himself a job at the WH Smith newsagency stand in Teddington Station.  Getting there by bicycle for 6am, he would work until 3pm and then, to make extra money, sell evening papers on the street corner.

Always keen to better himself and develop new skills, he then took a job at John Bright’s tailor shop in Kingston, learning how to expertly measure clients and help them select fabrics for their suits.

As he worked in the shop, Bob would watch the London buses go by and wonder about another change of direction.  When he learned that he could triple his pay by working as a bus conductor – or ‘clippie’ as they were commonly known – he was off again!

He was accepted at the training school at Kingston bus garage and before long had been issued with his two uniforms (one for winter and one for summer), a sturdy leather money satchel and ticket clipping machine.

Little did he realise just how hard he was going to have to work, though! Bob laughs as he recalls being put onto the 27 bus, through one of the busiest routes in London.

“I didn’t know anything about the area” he says.  “So someone would get on and say they wanted a fare to Harrod’s … I had no idea where that was, and got myself into a real mess.

“You were supposed to only allow five people to stand downstairs, but I had 10 standing downstairs, 10 upstairs and another 10 right up the stairs – it was chaos!

In the middle of all this, Bob was left puffing and panting from running up and down the stairs with the heavy money bag over one shoulder, and the clipper over the other.

“People were amazingly honest back then though” he recalls.  “If I’d missed taking their fare, they’d just throw the money in my bag as they leapt off.”

During his two years with London Transport, Bob played in the company’s table tennis league and also kept himself fit by getting involved with activities at the YMCA.

But at work, he began to tire of the demanding shift work, and headed back into the more regular pattern of a job with Montague Burton’s in Kingston – a business similar to the so-called “Fifty Shilling Tailors” of the day.

“I had decided I wanted a car and during the time at Burton’s I was able to teach myself to drive” he says. “I didn’t have lessons – you could just teach yourself in those days”.

Bob’s aim in learning to drive was so that he could work as a “tally man” – basically a door-to-door money lender and collector with a company called Blundells.

Struggling families would borrow money or buy goods for the home on hire-purchase credit, which made the tally man a welcome visitor at most of the houses he visited and Bob initially thrived on the friendly banter and the connections he made with his customers.

But inevitably, the nature of the business meant that some customers got into difficulty, which led to some defaulting on payments and, for Bob, some ‘nasty incidents’.

It all got too much for him, and ultimately – still only in his early 20s – he suffered a nervous breakdown.

Fortunately Bob was still living with his parents and as he recuperated, he did a variety of jobs, from window cleaning to delivering greengrocery.

Once back to full health, he re-joined Blundells and that turned out to be a good move because it was there that he met Georgina, his wife. The couple married in 1963 and Bob says her loyalty and patient support have been the mainstay of his life.

“Looking back, I can’t believe I put her through so many changes and moves but she’s never complained, and always supported everything I’ve done” he says.

The couple started their married life in Teddington, Middlesex, and Bob had his own business selling fresh fruit and veg door-to-door from a van.  Before long, he’d upgraded to a custom-fitted Commer van, a kind of walk-in mobile shop, and built a successful regular round in Teddington.

But when Georgina was expecting their first child Ian in 1967, they decided on a move out of the city and bought a bungalow in Yateley, Hampshire. Having a mobile business meant that Bob was able to build a new round in their new location – but typically gung-ho, he was keen to change and expand, which led to him selling the Commer and taking on an ice cream van instead.

Having borrowed the money for a new van, he had to make it profitable, and so took on extra lines such as sweets and cigarettes to supplement the ice cream sales.

That led to him taking on his first shop – an old-fashioned sweet shop on the high street in Frimley.

He gave the place a whole new lease of life, introducing a ‘pick and mix’ style of selling sweets, and adding magazines and newspapers (a nod back to his first job after leaving school).  It was so successful that he doubled the takings and, less than three years later, was eyeing up a much larger unit which had previously been earmarked as a Wimpy burger bar.

It was four times the size of his original shop and needed extra staff to run the bustling operation. He kept the small shop and turned it into a record shop.

In 1989 Bob additionally bought a DIY shop which was up for sale, and turned it into a shoe shop. Georgina loved working there, measuring children’s feet and fitting their shoes and working with the general public.

By this time Bob and Georgina had four growing sons – Ian, Barry, Colin and Trevor – so life was certainly busy.

But in the midst of all those demands, including 5am starts for the newsagents, Bob still somehow found the time and energy to play table tennis, take singing lessons, join a choir and an operatic company, and appear in stage productions!

By the age of 55, Bob was faced with the choice of either taking on a partner and expanding the business, or finally taking a rest and retiring from the rough and tumble of retail and newsagency.

He and Georgina opted for ‘retirement’ to the Isle of Wight, where they had enjoyed happy holidays with the children at Pontin’s and Brambles holiday camps.

They sold their business and moved to Totland in 1991 – but that retirement was to be very short-lived!

“I decided I wanted a little business” laughs Bob, “just to keep my hand in!”.

And that’s how he came to take on the toyshop in Freshwater, bought for cash and re-fitted by his own hand.

He and Georgina ran it as what might now be called a ‘lifestyle business’, enjoying the slower pace of life on the Island with their two younger sons, Colin and Trevor, who were by then in their early teens.

Bob was able to maintain his hobbies by playing for the Island in local table tennis leagues, playing tennis even until fairly recently at Brighstone Tennis Club, and singing in local stage productions.

He’s also done a lot of singing at old people’s homes, and jokingly describes himself as “a bit of a bighead”.

“I’ve got some wonderful memories of singing on stage at the Bournemouth International Centre” he says.  “My voice isn’t as good as it used to be but I still sing around the house – and everywhere else, really.

“I was in St Mary’s hospital recently and ended up singing for the nurses – I think they appreciated it!”

Like everyone else as we emerge tentatively from lockdowns, Bob is looking forward to getting back to some of the activities he loves – from snooker at Freshwater Conservative Club to maybe a game of tennis with friends.

But even whilst stuck in the house, he’s been doing his oil painting and teaching himself the piano.

“I’ve always been one for doing things” he says, with an air of understatement.  “Life is for living and you just have to get out there and grab it with both hands.”