Home|Interviews|Morris Barton: Will Morris come dancing back?
Previous Next 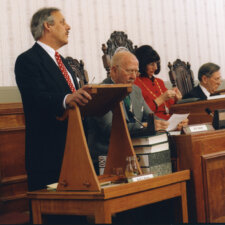 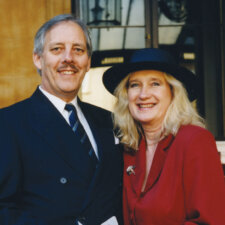 “I was all set to be the Liberal candidate to follow Steve Ross but I walked away when asked how much of my own money I was going to put into the campaign. I didn’t have any money to put in,”

John Hannam discovers just what Morris Barton is doing today ten years after he left the most important job in local Island politics. Does he regret it? Why didn’t he become the Island’s prospective Liberal parliamentary candidate after Steve Ross retired?

Its ten years since Morris Barton was the Leader of the Island’s Unitary Council and now many people are beginning to question whether he might just have been less of an ogre than his reputation suggested. He’s now continually asked as to why he doesn’t make a comeback. This is not out of the question and would be welcomed by many locals. How times have changed!

“I was all set to be the Liberal candidate to follow Steve Ross but I walked away when asked how much of my own money I was going to put into the campaign. I didn’t have any money to put in,” said Morris.

I can remember being at the ferry terminal on the actual day the imported mainland Liberal candidate, eventually chosen to replace the retiring Steve Ross, arrived for his adoption meeting. I can remember thinking, as a person with no allegiance to any party, that the mere fact that he arrived from the mainland was the kiss of death – and so it proved.

There might have been mixed feelings as to whether Morris Barton would have been a good MP for the Island but the thousands of floating voters may well have gone for a local man, after the success of Steve Ross.

Not having that opportunity to try may still be a bitter memory for Morris but the boy from a council house on Pan Estate rose to become the most powerful man in Island political circles. This was a success story anyone would have been proud of. Amazingly, a boy from two doors up, Terry Perkins went on to become world famous pop star Craig Douglas. What a double for Pan Close! They also both sang in Barton Boys Choir, later Priory Boys Choir

Morris is so proud to be an Islander and during his 15 year reign as Council Leader he obtained so much publicity for the Isle of Wight. Much of it was to come from the Ecu saga which obtained worldwide publicity.

“It was really a marketing idea we dreamed up to get publicity for the Island but there was a serious content to some of it,” reflected Morris.

He openly admits the top job created so much stress but admits much of it was his own doing.

“I was never prepared to get my head down. There was no point being there if you were not going to do something.

“I did go over the top at times and you can start believing your own script. Ego takes over and sometimes you can forget where you come from,” admitted Morris.

He did become a legend and visiting comedy stars quickly found out that if you mentioned Morris Barton you instantly got roars of approval. Both Jasper Carrott and Jo Brand were prime examples. Obviously, Morris loved every minute of it. I’m afraid I can’t reveal the source who supplied the comics with suitable material

For many of us who have known Morris Barton since we rubbed shoulders at local pop gigs by the Cherokees and Shamrocks, his company is still as enjoyable as ever. He has maintained lifelong friendships with many people. When he first joined the County Press, as a printer, he was an apprentice to my late father, Roy. Dad was a staunch Labour supporter and young Morris was his blue (perhaps that should be red) eyed boy. 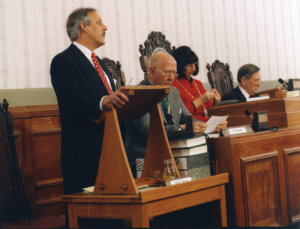 Morris Barton joined the Labour Party in 1959 and that was down to Hugh Gaitskell. Six years earlier he had received a severe reprimand from his school headmaster.

“At school there was a very left wing faction that saw USSR as the guardian of world peace and we decided, in a show of solidarity, to take time off from school to go and meet the Russian warships as they came into Portsmouth. We got into even more trouble with the head for red stars on our lapels.”

Thirty seven years later he was an honoured civic guest in the Kremlin, hosted by a Soviet minister. He was also in Russia on the eve of the coup against Gorbachev.

Morris Barton has come a long way since he won a place on the old Newport Borough Council back in 1969. It was not a landslide victory – more like twelve votes.

With Labour holding eleven of the twelve seats there were several committee chairman jobs up for grabs. He was given the chair of the planning group and sent on a two week crash course to learn as much as he could.

Morris Barton certainly didn’t go into politics for the money. For many years he also had a day job and had to take time off. Since Morris left local politics the Labour government has brought in a scheme to pay councillors.

These days he runs his own consultancy business which specialises in political advice and pre-planning.

Morris has always loved sport and by tradition the Barton family has supported Portsmouth. Two of his grandsons have kept up the tradition but Grand-dad Barton has brought a little disgrace to the family – he follows Southampton.

Will Morris ever return to the Island’s local government scene? At present he’s an East Cowes town councillor and out of the political scene.

“I could be back. I wouldn’t rule it out. I have now reached the third stage of my life,” teased Morris.

I know his wonderfully supportive wife, Marcia, a real gem, would be highly delighted. I have the feeling she would not be alone.