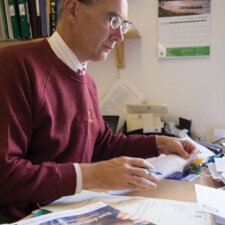 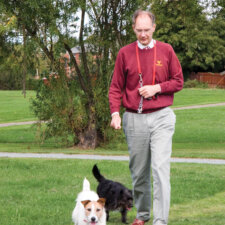 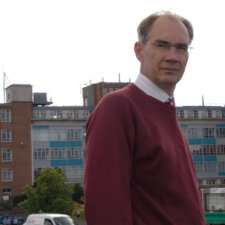 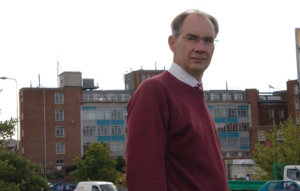 He loves old cars, is hopeless at DIY, loathes the idea of wasting anything – but reckons the Isle of Wight’s County Hall is so ugly it should be demolished!
Andrew Turner is a million miles away from the cardboard cut-out version of a Tory MP, as anyone who has seen him batting about the Island in his beloved, M-registered 1994 red Mini will quickly realise.

We went to meet him and got a glimpse of just what makes the Island’s Parliamentary representative tick.

Having been brought up by parents who were both teachers, and then choosing that same career for himself, it was perhaps no surprise that Andrew Turner’s first steps into politics should have been prompted by an educational issue. The threat of Grammar School closures was a subject very close to his heart, and one he fought tooth and nail against.

As he observes: “The only way to prevent things from happening is to do something about it, and that’s exactly what I have always done”.

After winning a scholarship to Rugby’s famous School, Andrew went on to Oxford, where his fellow students included Newport’s current parish priest Father Bruce Barnes, as well as William Hague, who was to become a future Tory leader.

At Oxford, Andrew became an active member of the Union and joined the Conservative Party – unwittingly sowing the seeds of his own future life in politics.

After Oxford, he followed his parents’ career path, teaching geography and economics for seven years at comprehensive schools in Oxfordshire – but all the while, he was becoming more and more active within the Tory party.

So, it was no great surprise when, in 1984, he quit teaching to join the full-time staff at Conservative Central Office. Subsequently, he was appointed to the full-time salaried position of Special Advisor to the Minister of Health and Social Services. He subsequently ran the Grant Maintained Schools Foundation, and acted as an education consultant to clients including the Girls’ Day School Trust, the American education company Edison, and the London Borough of Southwark. 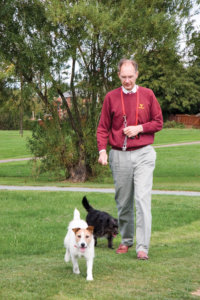 It was in 1996 that Andrew first applied to become the Conservative candidate for the Isle of Wight, when the previous long-standing Member Barry Field was retiring through ill health.

In 1997 he stood against Peter Brand and fought an exhausting, but ultimately unsuccessful campaign. Undeterred, Andrew spent a further four years in opposition, showing his commitment to the Island by buying a flat in Cowes with his partner Carole.

Since then, the Island has definitely become home to Andrew and Carole: “I wouldn’t like to live anywhere else” he declares.

His favourite “away-from-it-all” haunt for walking his two rescue dogs, Bertie and Sausage, is right up on the Downs at Brighstone –and when he wants to relax with company of the two-legged kind, he enjoys winding down at The Bargemans Rest, five minutes walk from his home in Newport.

Andrew and Carole now live at Seal House, in Newport town centre, which they share with the resident ghost, a boy who appears from time to time on the stairs. The house has a colourful history altogether – and Andrew is just one of a number of MPs who have lived there. Other previous parliamentarian residents have included Sir Tristram Dillington, who famously lost the house in a game of cards. When at home, Andrew loves to watch old movies, which he has been known to use as a diversion from all forms of DIY, painting, fixing things, and assembling furniture.

“If I cannot operate it from the box, then I am not interested,” he admits. Luckily, Carole is the complete opposite, and positively relishes any kind of DIY challenge – right up to plastering walls! Andrew prefers to get his buzz from old cars: he has an old, rubber-bumpered MG that he would love to restore one day.

Currently it’s on the mainland but he dreams of bringing it to the Island and starting work on it. “I would love to see the old MG restored back to its glory days,” he says wistfully. In the meantime, he contents himself with driving a 11 year- old red Mini, which perfectly illustrates his view that “If it’s serviceable then why replace it?”

This is certainly a view he holds when it comes to historic buildings – and he still seethes over the recent demolition of the old Clarendon Hotel in Shanklin.

“The building had such history,” he says.  “The beams that were used in the now-demolished building came from the wreck of the Clarendon, which sank on the 11th October 1837. So great was this disaster that the building of a lighthouse began in 1837, at St Catherine’s Point, it was completed and first used on March 25th 1840. Unfortunately 25 people lost their lives. “And now all this has gone forever!”

There’s one building the MP wouldn’t mind doing away with, however- and that’s the Island’s County Hall.

“It needs to be pulled down” he says uncompromisingly. “It’s an ugly building, with hundreds of masts and aerials – goodness knows what they do, it just looks awful”.

He also despairs over some of the modern housing developments that are springing up and says: “I wish that developers would put some character back into the houses they build on the Island. They seem to forget we are an Island and that we have a rich history and a reputation to live up to. 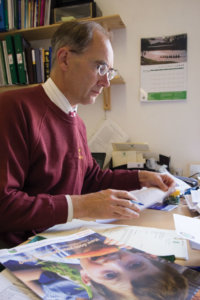 “These Wendy houses that are being built everywhere are ruining the Island. If only a little more care and thought was put into the initial planning stages, we could build new houses that continue to fulfil what visitors to the Island expect”.

On the subject of visitors, Andrew reckons that the Island doesn’t necessarily need to attract any more than it has – but it does need them to be able to spend more money whilst they are here.

“We also need a new, younger, generation of visitors to the Island,” he says, “to take advantage of all the sporting facilities we have here. We need to regenerate our towns and coastlines, bringing in better quality facilities and making use of all the assets the Island has to offer.”

The Island has certainly won this Midlands-born boy over, so much so, that even if he lost his Parliamentary seat, he’s adamant he’d still remain here.

He loves the pace of life, the natural beauty of the landscape, and the social scene – with the County Show being his favourite calendar event. “I fight hard for the Isle of Wight in Westminster and Whitehall” he says, “and I see it as my job to enable Ministers and fellow Parliamentarians to understand what it is like to live and provide services on an island”.