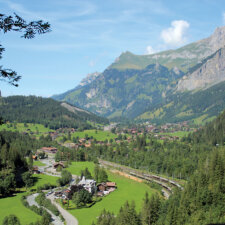 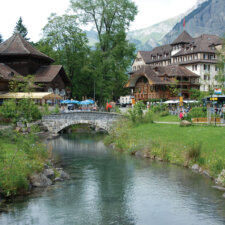 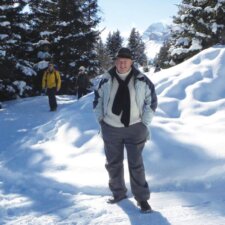 During my many travel experiences, I consider myself fortunate to have come across, almost by accident, the beautiful Swiss village of Kandersteg, which lies close to the borders of the Kanton Valais, writes Terry Willey. 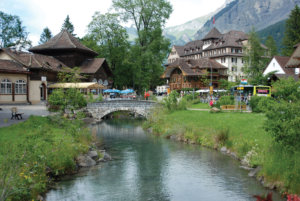 Some 15 years ago, I had decided to book a holiday to Switzerland to see the New Year in with my family, and while we had no particular aspirations to ski, it was perhaps for this reason that the travel agent directed us to this particular village.

The train journey, which took about two hours from Zurich, was well worthwhile in itself, winding its way around picturesque lakes and the surrounding mountains which basked in clear blue sky and acres of snow. Kandersteg lies on the east of the majestic Blumlisalp range of mountains and offers a busy railway link through the Lotshberg link to most major towns in Switzerland, as well as many cities in Germany, Holland, Belgium, Italy and France. The road from Spiez is well-built and the car train through the Lotshberg provides excellent connections to Italy and the Rhone Valley.

Tourists flock to Kandersteg to enjoy more than skiing, however. The area offers several toboggan runs, ice climbing, curling and ice skating, extensive designated walking options and local bus and train connections to the neighbouring municipalities of Kander-grund, Frutigen and Adelboden – the latter of which offers extensive skiing facilities.

Kandersteg village itself has a small population but offers the most wonderful scenic backdrop of mountain ranges and cable cars to the Oeschinen Valley.  There is also a walk to the most stunning alpine lake situated at the foot of the Blumlisalp, which delights visitors from all over the world. The cafés and restaurants offer plenty of locally-prepared food, including everyone’s favourite, apple strudel complimented with a glass of warming Gluhwein.  One of the favourite walks for tourists is through the Gemmi Pass.  Whether or not is was used by the Romans , as speculated, there is certainly documentary evidence going back to the 13th century proving that Medieval traders used the Pass to transport goods. 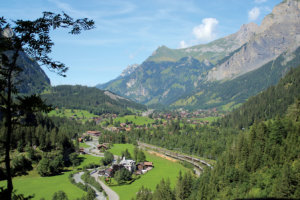 There are many excellent accommodation hotel options, but ours for the past nine years has been the Bernerhof Hotel, which affords the most magnificent mountain views from its guest rooms, along with excellent dining and a friendly welcome.  An International Scouts Centre is also located at the far end of the village, towards the cable car to Sunnbuel with an altitude of 2000 metres and it’s here that serious walking and skiing can be undertaken.

Back in the village lie two impressive churches; one Roman Catholic and the other Evangelical,  both offering regular services to the villagers and special concerts  from time to time as an added attraction. The locals are very welcoming and always keen to offer you the best possible hospitality, communicating with impressive ease in Swiss, German, French and English.

Kandersteg has the sense of being almost a ‘lost world’ in the middle of the Swiss mountains, and for moments in high altitudes and when walking through the forests, it’s possible to experience that special moment of ‘total’ silence.

I shall never forget our first visit in 2000 with our family. We arrived in the village at around teatime to witness hundreds of people gathered in the centre with a Swiss band playing and awaiting with much excitement, the arrival of a former native of the village, Adolf Ogi, a member of the Swiss Government from 1988 to 2000, who was twice President of Switzerland during his time in Government. He was in Kandersteg to open a newly-provided street that would connect the village by either car or foot to the cable car station to Oeschinen and to be named in his honour as the Ogi Strasse. During his reign as President, he was able to demonstrate the individuality of Switzerland using Kandersteg as a fine example to many distinguished guests from all over the world and as a result of this, the people of Kandersteg became more aware of political affairs both internally and externally.  Unlike the villagers and other regular tourists present at this special event, we were far from prepared for the shivering, sub-zero temperatures – but it was well worth the chill to have experienced this very special occasion!

Whether you visit Kandersteg in the summer or during the winter months, it’s unlikely to disappoint you with its magnificent scenery, numerous outdoor options and warm hospitality. It is most certainly a village that should not be missed should you travel to Switzerland.