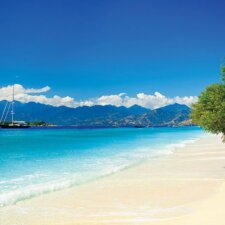 It is one of those places that you can conjure a vision of from the various films and writings, before you arrive, writes Terry Willey.

The reality produced a special depth of life and nature which made Bali a very special place to visit. Upon arrival at our hotel it was clear that the people were sincere with their welcome and they were very keen to share with us their culture.

The island is surrounded by coral reefs with white sandy beaches to the south and black sand to the north and west which offers an interesting contrast. Our hotel was situated to the south and in a central part of the tourism area. Although tourism represents the islands largest growth output, agriculture is still their biggest employer and notably with rice cultivation. Crops growing in smaller amounts include fruit, vegetables and coffee. Fishing is varied and plentiful and a fish dinner is worth experiencing on one of the southern beaches where tables and chairs are laid out to fully appreciate the sun setting over the sea. The Island is also famous for its artists who produce an array of handicrafts including batik and ikat cloth and clothing, wood and stone carvings, painted art and silverware. These are made around the various villages on the island and they are famous for their wind chimes and wooden furniture. The skill of the local people is quite exceptional and the quality of the products produced is excellent and lasting.

Cockfighting still takes place in certain villages on a regular basis and despite my absolute repulsion as to the whole concept of this sport, it was however clear to see that the Balinese people are devoted to their roosters in the way they are preened, groomed and dined, in fact it is said that they are more pampered than our own Queen’s corgis. The owners look after them with an unerring devotion and take them to meet friends and ensure that they are always fed the best of the available food and place them in baskets nearby the roadside so they are entertained by passing traffic. I purchased a carefully and delicately hand-made carving of a man with his roosters to remind me of our visit. 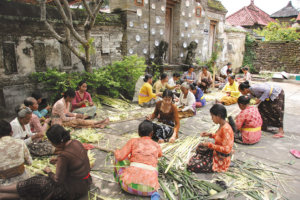 The Balinese are overwhelmingly religious and Balinese Hinduism is deeply interwoven with both art and ritual. The Hindu New Year known as Nyepi is celebrated in the spring by a day of ‘silence’. On this day everyone stays at home and tourists are encouraged to stay in their hotels. Just before the day of the arrival of the New Year large and colourful sculptures are paraded and finally burned in the evening to drive away evil spirits and other festivals regularly take place throughout the year. Much to my surprise there were celebrations such as ‘the day of the car’ and a celebration of a ‘tooth filling’, more locally recognised to be a coming of age ritual. The most striking and unusual was that of a celebration of a cremation where tourists could participate in a tour to observe an open air combined cremation of several persons. Known commonly as a ‘temple festival’ it involves both ceremonial and ritual performances which can be loud, boisterous and atmospheric but are intended to depict a true celebration of life.

Every day without fail our waitress, following the serving of our breakfast, sought our consent to retire to the quiet garden area of the hotel to undertake daily worship at a mini Buddhist Temple set aside for this purpose. We once observed her as she discreetly made her journey to the temple with her daily offering of fruit and food. It was very clear to see that their beliefs formed a very important part of their lives.

We were able to witness many evenings of music and dance where the men and women take special pride in performing in exquisite costumes. We were regularly invited to participate and whilst on one occasion I succumbed to such an invitation, my movements were far from graceful!

Balinese society appears to be influenced around family life in local villages and closely tied to religion and they are indeed an intriguing people with much to offer and a warmth of welcome to their visitors.

It was therefore not surprising to note that Bali received the ‘Best Island Award’ from the Travel and Leisure Industry back in 2010.