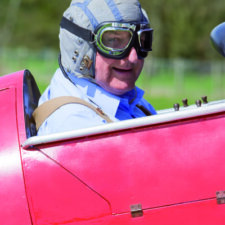 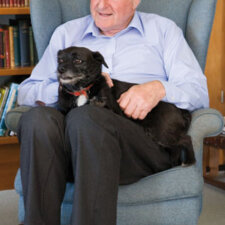 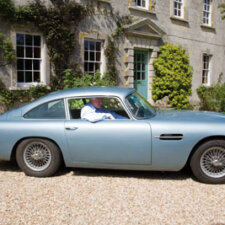 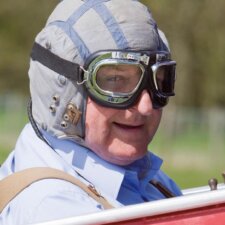 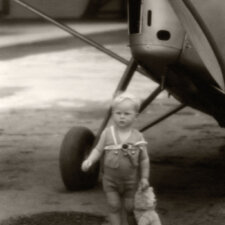 Christopher Bland has long been one of the Island’s movers and shakers. But, as Roz Whistance finds, he’s also a man who loves to have fun.

“I’m Mr Boring,” says the man who has just landed his Tiger Moth in the private airfield behind his beautiful house, and, having removed his Biggles helmet and goggles, hops in his classic Aston Martin for the benefit of our photographer.

This is Christopher Bland, former High Sheriff of the Isle of Wight and later Lord Lieutenant. The ‘boring’ claim is on the basis that he has owned the same aeroplane and the same car for 40-odd years, “and the same tolerant and supportive wife for 48 years”. It’s the sort of boring we could all get used to.

If the house, the car and the plane paint a picture of an ostentatious life, it is misleading. “It is just a consequence of having been around for a long time,” he says. “If you added up the cost of the house, the car and the plane at the time, they totalled under £40,000.” Looking at the towering house, which he shares with his wife Judith and dog Mottistone, set among trees and lawns in the out-of-the way tranquillity of Yafford, the true nature of inflation hits home.

In fact after spending a little time with CB, as he is known to his friends, you realise that he is far from ostentatious. His imposing presence – he is 6ft4 – is diffused by a great warmth and friendliness: and the sense that he’s a man who loves to have fun. He is delighted by the beauty of his Tiger Moth – stunning in its immaculately restored red and silver livery – and also by its history: it was made for the RAF at Morris Motors in 1941, when car production was halted for the War. “I bought it with a friend – who has since died – when the Isle of Wight Gliding Club was getting rid of its Tiger Moths and nobody else came along with £250,” he says, matter-of-factly. “It gets flown around 30 times a year.”

Having pulled it out of the hangar for the photo Christopher is loath to put it back. The fortnight of glorious sunshine over Easter has dried out his airfield and he is noticeably bitten by the desire to fly.

As for the ‘James Bond’ Aston Martin, a 1964 DB5, the beauty of its curvaceous lines is timeless. “Mechanically they’re ideal, from the golden age, the 1960s.” He raises the bonnet to reveal the immaculate engine, but, with a twinkle in his eye, refutes any suggestion that its full potential might be limited by the Island roads: “As far as I’m concerned it’s a perfectly practical car for two people and two children with no legs,” he smiles.

He is an inveterate tinkerer with things mechanical, he says, so his job, with Hovertravel, was as much a hobby as work. “I was just very lucky to be employed to do something that was my forte. A colleague once said to me: ‘The reason we’re all here is we’re all hovercraft nuts’ – which is absolutely true. Not anoraks, no – but definitely nuts!”

Christopher Bland was born and brought up in Walton-on-Thames, but school was interrupted by the outbreak of war. He was evacuated to America and has the dubious distinction of having crossed the Atlantic twice during World War II: dubious because it was the tragic death of his father that brought him and his mother back, in the middle of the U-Boat battles, in 1943. “It seemed very unjust, given he’d served in the first war.” Aged seven, he went to school at Sandroyd, and then to Clayesmore. National Service was in 1955. His choice of regiment, even then, reflected his interest in ‘tinkering’. “I chose the Royal Engineers: but I was ordered to report to the depot of the Gordon Highlanders in Aberdeen!”

However, he was eventually commissioned as a Second Lieutenant of No 1 Railway Group in the Royal Engineers, “where I spent the rest of my National Service playing with railway trains.”

After National Service he served an apprenticeship by Rolls Royce in Crewe. “I was sent to the Isle of Wight, where I endeavoured, successfully, to persuade Britten Norman in Bembridge to buy Rolls Royce engines for their CC2 Hovercraft.” In return, Britten Norman persuaded Christopher to come and work for them. That was in 1962, and now on the then-generous wage of £29 a week, he married Judith.

In July 1965 Britten Norman, with others, started Hovertravel: it was the first truly commercial Hovercraft service. “Eight hundred people crossed the Solent on that first day,” explains Christopher. “Ryde has no water at low tide – so you couldn’t get a boat in there anyway. If Queen Victoria had had a Hovercraft they would not have built Ryde Pier in 1865!” The Hovercraft now takes about 800,000 people a year.

Christopher became MD of Hovertravel, which in 1976 took over the British Rail Hovercraft Southampton-Cowes service. However, the firm came up against Red Funnel in Cowes. “They won the day because they were better situated. We finally closed down the service, Solent Seaspeed, on Christmas Eve 1980.”

In 1985 Christopher crossed the floor to become a director of Red Funnel. “It was an interesting time, during which all the present fleet was built.” It was then that he was sought for other, public, roles: he was on the Prisons Board, was Chairman of the Health Authority, and was made High Sheriff in 1988: “I really couldn’t have done any of that without the great support from my colleagues at Hovertravel,” he says.

Keeping all the balls in the air suggests he needs to be frightfully disciplined. “No, I’m probably a bit ‘broadbrush’,” he says, rather surprisingly. “I’m a great believer in not interfering if people know what they’re doing.”

He downplays the High Sheriff appointment a little, saying there are far more engagements involved for today’s Sheriff. Championing opportunities for young people was high on his agenda.

Taking on the role of Chairman of the Health Authority was not his cup of tea, however. He felt rather dragooned into it: “When approached I said I didn’t want to do it, and the powers that be wrote back saying ‘You’re the only name on our list’!” He smiles at being the victim of a fete accompli. “I don’t think I ever understood the workings of the NHS and therefore did not do justice to the position. My time was thankfully cut short after a rather ‘frank’ discussion with the then minister, David Mellor.”

Serving on the Albany Prison board was more to his liking. “You were a neutral person the prisoners could talk to. Ninety-five per cent of them are innocent of course – according to them. Someone once said to me ‘Mr Bland you’ve got to remember we’ve only got the stupid ones in here, the smart ones are still out there!’”

He believes the prisons have been long neglected and is outraged that the temporary ‘doubling up’ of prisoners in one-man cells still continues after a decade.

When Christopher Bland was approached to be Lord Lieutenant in 1995 it was a complete bolt from the blue. “I’d given my own suggestions as to whom it should be when approached by the PM’s office. But I never saw my name on the list!” It was, he says, an honour and a privilege to represent the Queen for 11 years. The role of Lord Lieutenant has many facets, all of which are important to the fabric of our society, and which need to be taken very seriously. However, there is also the lighter side of the position, and Christopher recalls two very special occasions. In 2001 the Royal Yacht Squadron at Cowes hosted the New York Yacht Club to celebrate 150 years of the America’s Cup. “The RYS’s organisation was as breathtakingly efficient as it was impressive to those from both sides of the Atlantic. Not only did we have the cream of the yachting fraternity, the event was patronised by three kings and the Aga Khan!”

A visit by the Queen and the Duke of Edinburgh together, in May 2004, was one of the other highlights of his tenure. While the Duke was taken to look at boats and businesses, Christopher looked after the Queen on the Havenstreet railway. “We had a very special lunch at Osborne House, where the Queen was able to discuss her gardening problems with Alan Titchmarsh.”

Christopher retired as Lord Lieutenant after 11 years, aged 70, and as chairman of Hovertravel in 2008. As he remains a non-executive director he has effectively been with the company for 45 years.

Recognition for his dedication to the life of the Island came in 2008 when he was made one of just two Freeman of the Isle of Wight – Dame Ellen MacArthur is the other. Although he joshes that the honour entitles him to drive any sheep he might have through the centre of Newport, he is clearly humbled by the honour.

So retirement for Christopher Bland isn’t of the feet up variety. He remains concerned about the governance of the Island, expressing mild frustration about the length of time taken to make decisions. “I think it could be better,” he says carefully. “However, I have to extend my admiration for people who put themselves up for election as councillors.” He is, though, full of enthusiasm about the sort of things which make the Island unique, such as Osborne House, Carisbrooke Castle and the Royal Yacht Squadron. 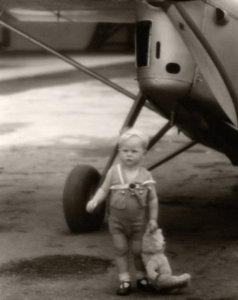 He has, he says, his fears for the future: “Overpopulation, total disregard for the environment, pollution of the seas and a greed amongst fishermen that sees us throw 18 million tons of dead fish back in the sea every year are hugely concerning.”

Six grandchildren are enough to make anyone worry about a changing world. He sees them regularly although four live in Hong Kong where his youngest son, Tobias, works in finance, recruitment and event management. His eldest daughter, Louise, is head of fresh food product development for M&S, Emma is an image consultant, and Kate is a partner in Just Radio which produces programmes for the BBC and others. Christopher is quietly, but immensely proud.

Keeping in touch with them all is easy, one imagines, with email and ‘real time chat’ with Skype. But Christopher Bland wants none of that. He’s happy to stay in a mechanical world where things are fixable with just a little tinkering. The Aston Martin and the Tiger Moth were built long before the advent of electronic gizmos, and as he says: “You can’t tinker with black boxes.”

Later that day the Tiger Moth is seen flying joyfully over the Brighstone Downs.