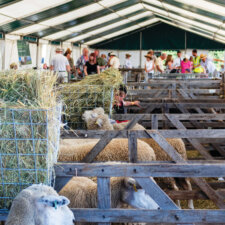 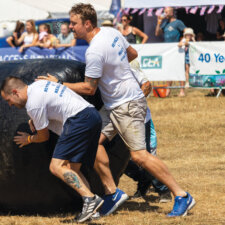 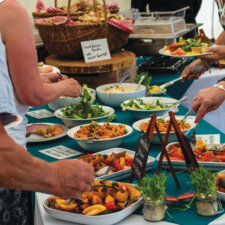 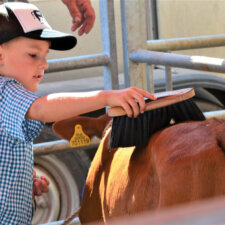 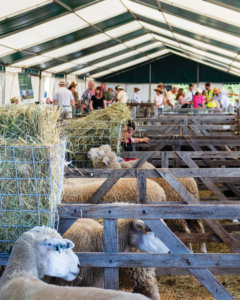 As a born-and-bred Islander, I feel passionately about the importance of the Royal Isle of Wight County Show. The Agricultural Society, which puts on the Show every year, was originally founded in 1882 and Queen Victoria was the first patron.

She was also a regular exhibitor throughout her life, and a frequent visitor to the annual Show. King Edward VII followed as patron, with Major Henry J Way becoming the first honorary secretary, a position he held for 24 years. The Show has always taken place in or around Newport, with the exception of the years 1888 and 1897, when the venue was Ryde. Historically the Royal Family always took a keen interest in the affairs of the Society. On the death of Lord Eversly, Governor of the Isle of Wight, Prince Henry of Battenburg succeeded as president. In 1885, the date of the Show had to be altered as it clashed with the wedding of Princess Beatrice.

Financially, the Society has faced many crises, but because of the loyalty of Islanders, it has always managed to weather these storms.

The Society organised the ploughing matches, and before the formation of the NFU the Central Chamber of Agriculture was the national agricultural forum. From 1909, Mr R.P. Mew represented the Society at the London meetings and reported back quarterly to the members. For many years, the site for the Show presented a problem, first on one field, then another. Eventually it came to rest on the Nine Acres field in Newport, where it was able to purchase the ground securing a regular flat area with plenty of room for the Show to grow.

In more recent times, too, the annual event has had its ups and downs. There was a period when it fell into the doldrums and was nearly ended. Then Amy Willcock together with Graham Biss came on board and, through determination and dedication, not to mention the hard work of everyone on the committee, the Show was totally revived. Graham has been the chairman of the Show Committee for the last five years and with their collective energy and enthusiasm, the Show has gone from strength to strength. It is now one of the best one-day shows in the south, and admired and supported both by Islanders and mainland breeders. 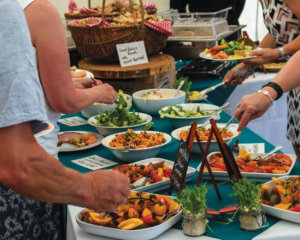 It was almost inevitable after selling the Seaview Hotel and retiring, that my husband Nick and I should end up on the committee running the Members’ Area, and in particular organising the lunch for over 200 people, along with a bar and light refreshments served all day. All the delicious food and catering is supplied by David Rogers and his excellent team at All About Catering. The huge and beautiful marquee in the Members’ Area, along with hundreds of tables and chairs, is supplied free of charge, by Coast and Country. Peter Alexander and his team from Thompson’s Nursery produce the spectacular floral displays, again free of charge. Nick and I find that pulling together the whole Members’ Area, with this generous and professional team, is great fun. For the last two years we have been able to supply a further tented area for the bar and light refreshments, thanks to the sponsorship provided by Ben Rouse of Rouse Ltd and James Attrill of BCM. We needed this extra space because while many of the members like to enjoy the formal lunch, some members are exhibiting or taking part in events and so are not always able to get away. Also, we wanted to encourage younger families to become members to ensure the future of the Show.  So now there is a less formal area where people can dine, inside or out, in a more relaxed atmosphere but still enjoying the spectacle.

The Members’ Area is very much the heart of the Show. Set right in the middle of the ground between the main ring and the show jumping arena, it has spectacular views. Nick and I really enjoy attending the monthly meetings in the Hare and Hounds with all the other volunteers on the show committee.  It is fun, through the long winter months, listening to and contributing to the plans. All the volunteers in every area work so hard to produce this special day, showcasing and promoting Isle of Wight plc. It is an incredible effort just for one day but, under Graham’s dedicated leadership, it has improved and expanded. So we all feel a real sense of pride in laying on this unique and spectacular, truly local event. It is quite right, bearing in mind the long history and Royal patronage, that it is called the Royal Isle of Wight County Show. 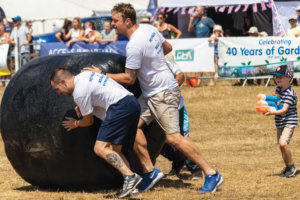 Over the last five years the Show has developed a wonderful connectivity with the public. Initially they came to see and get involved in all that is good within the Island’s rural community.  But it has now moved on from this and there is a sense that everyone can come and have a go, with young people able to actually get in and learn how to handle the animals or taste the produce. From rolling huge bales of hay around obstacle courses to sheep shearing competitions, or celebrating the best of Island food, plants, gardens, stock and riders. Not forgetting the enchanting and brilliant poultry section [my favourite tent]. There is a far greater focus on sharing information, with huge educational boards explaining everything from the characteristics of certain breeds of sheep to exactly where our milk or eggs come from. It has retained its rural character and roots while broadening its appeal to give the whole community a feelgood factor and a great day out.

Today, many locals do not realise or know the history or background to the event. Or, more significantly, why it is important not just to attend the Show but also to become a member of the Society. The Show is the high-profile face of the Royal Isle of Wight Agricultural Society. Its aim is to showcase and promote the rural sector and give Islanders a sense of place and identity. It is definitely not a private show just for farmers, but aims to reach out to all the Island and holidaymakers too. Of course it has and continues to hold onto its historic roots with a large section devoted to livestock and equine events, but now it has something for everyone.

This year we have worked with all the primary schools, inviting them to come for a ‘Taster Day” to see what goes on at the Show. There was also a poetry competition based around Robert MacFarlane’s book, Lost Words. This beautifully illustrated book highlights the rural words that have been removed from the Oxford children’s dictionary. For example Acorn, was replaced with the word App and Conker with Chat-room. While the majority of young people in urban society may have stopped using words Acorn or Conker, children in rural communities, like the Isle of Wight, have not. Thanks to generous local donations 43 copies of the book were presented to every primary school on the Island. And a poetry competition was held in the theatre at the Show with entries from all ages and the mainland too.

Along with the Show, the Society also promotes the Wight Marque for Island food, education and the rural environment with the schools and most important the Rural Careers’ Fund. It is because we believe in the importance of this fund that Nick and I give up our time every year to run the Members’ Area. The fund helps to ensure the Island has good, well-trained young people able to work in the rural sector.

Anyone under 25 years old with a strong connection to the Island can apply for a Bursary or Scholarship of up to £3,000. This adds value to the IW farming and land-based industries and ensures young Islanders gain the relevant qualifications or skills.

We all know the future of our beautiful island lies in our young people and so helping to enable them overcome financial difficulties to train properly is vital, especially in these times of cost-cutting and with the increased price of travel to the mainland courses. 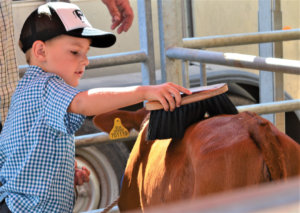 So I urge all of you to come and join the Society. Membership is only  £28 a year on Standing Order and includes free entry to the Show worth £10, free entry to the beautiful Members’ Enclosure in its prime location, and special rates all year round for members on Wightlink ferries.

So you get a huge number of added benefits for your £28 membership – but more importantly, the money from your membership is vital to ensure the future of the Rural Careers’ Fund.

This year was particularly challenging for the Royal Isle of Wight County Show. Firstly we had to move the date from its usual slot at the end of June, because it clashed, as a result of the change of date, with the much earlier IW Festival. Obviously the two couldn’t happen on the same weekend. So we moved to the 8th July for 2018. This was not ideal as it made it difficult for some of the regular participants. Then with one of the hottest summers on record it was testing setting up the ground, especially with the rock-hard earth and sweltering heat. Flowers, animals and people were all wilting by the time everything was ready and in place. Then with the usual aplomb, the Lord Lieutenant and the High Sheriff were there to open the Show. It was a glorious day, possibly too hot, as many may have decided to head to the beach. But in the end the Members’ Area was buzzing. The lunch for 200 was packed and everyone had a great day out.

The committee will shortly meet to review the day’s events, what went well and what areas we can improve. It is only by constantly reflecting on and thinking through the future of the Show that it will be able to survive and continue on into the distant future for the benefit of us all.