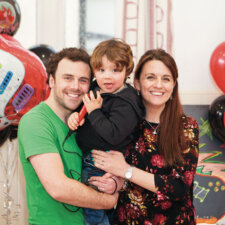 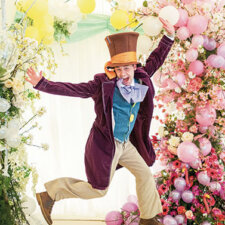 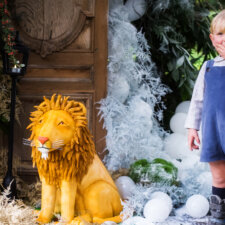 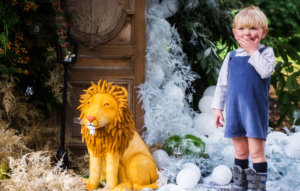 A husband and wife party organising team that started on the Isle of Wight just five years ago, on a meagre budget of under £50, is now masterminding no-expense-spared children’s parties for Royals, sports stars and “high net worth” families. We caught up with Charlotte Brisco to discover the background to this spectacular success story.

The date December 22, 2010 is clearly etched in Charlotte Brisco’s memory as the day that she and husband Daniel – otherwise known as party people ‘Dazzle and Fizz’ – staged their first children’s party.

It was at her sister Christie’s house in Sandown, for her four year-old niece Evie, and  had been planned for 30 children. However that date just happened to coincide with one of the Island’s rare experiences of snow – which meant that only three children actually turned up.

“It seemed like a disaster at the time,” recalls Charlotte.

“We had blown the sum total of our bank account – £47.50 – on one Fireman Sam costume, which was all we could afford.

“We were living in a tiny flat in Shanklin and had to buy the cheapest, thinnest paper we could find at Tesco to print off some flyers for the business”.

But despite the snow having done its worst, the sheer enthusiasm of acting professionals Charlotte and Daniel shone through so brightly that day that the parents of all three children who attended their first party went on to book events of their own – and Dazzle and Fizz were on their way!

Once the Island’s famous ‘jungle drums’ began sounding, the bright young party couple gradually found themselves attracting more bookings via word-of-mouth recommendations.  Meanwhile, Dan – who was classically trained at Birmingham School of Acting – was also earning some regular income by working for the Spotlight company at Shanklin Theatre.

“We started off thinking that if we could just get four parties a month, we could pay the rent with that, and live on the theatre money,” says Charlotte.

Even more remarkable is that they built the business while caring for their baby son, Oliver, who was born in March 2011, just three months after their launch.

“I remember doing one party nine days after Ollie was born, and having to go and breastfeed him in the loo halfway through. The midwives were very cross with me!” 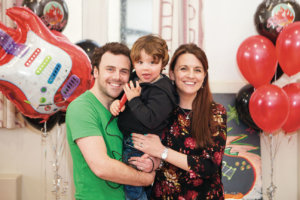 Birth of a business

In fact it was Oliver who indirectly had led to Dazzle and Fizz starting up on the Island in the first place.

As Charlotte explains, they were still living in London when she became pregnant, but acute morning sickness forced her to spend a month in the Hampstead Royal Free Hospital on her own, while Dan struggled to keep working and pay the bills.

They made the decision to move to the Island so that she could be supported through the later stages of the pregnancy by her mum, Rosemary and sister Christie.

“We thought it would be temporary, for maybe 6-12 months, but we needed to make money and thought that children’s entertainment was the obvious thing for us to do, as we both love it.

“There was nothing on the Isle of Wight that was in line with the London market, and it was something we felt we could offer that would be new.”

A former Sandown High School pupil who graduated in English and Theatre Studies from London’s Royal Holloway University, Charlotte had quickly realised she didn’t enjoy the mainstream acting business.  In fact, she spent some time successfully pursuing a sales career in London before, as she describes it, “swapping my briefcase and Blackberry for a tiara and magic wand” and transforming herself into a children’s entertainer.

In many ways, this proved a perfect combination of talents to spot the party business potential on the Island.

Even before the end of their first year in business, Dazzle and Fizz was starting to attract larger London bookings:  “I’m not quite sure how” says Charlotte, “probably it came via people who holidayed on the Island, around Seaview and Gurnard”.

She admits it felt overwhelming at first when the bookings started speeding up and getting bigger in scale.

“We felt a bit out of our depth for a while, but then we decided we just had to go for it”.

She recalls getting one massive confidence boost early on, from a spy-themed party they organised at a venue in Notting Hill, for 40 children.

“We did everything from the décor and styling to table dressing and the client was really pleased with us, which made us realise ‘Yes – we can do this!’

It wasn’t long before Charlotte and Dan had to take on a couple of staff based in Southampton and the New Forest, to help with events on the mainland.

“By mid-2012 I seemed to be spending every Saturday and Sunday on the ferry going to mainland parties” she recalls.

That made no sense, and ultimately led Dazzle and Fizz to re-locate to their current base in Surrey, from where they can service their main client base in London and the stockbroker belt of Hampshire and Surrey.  They now organise around 1,000 parties a year, at a rate of up to 20 a day.

They franchised out the Isle of Wight arm of the business for a while, but that closed in October 2015 so that Dazzle and Fizz could concentrate solely on their booming core business on the mainland. 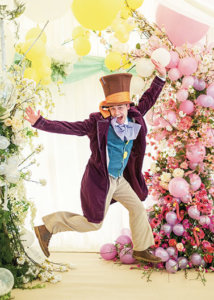 As a recommended party provider to such high profile venues as the Mandarin Oriental Group, Bulgari Hotels and Coworth Park in Ascot, Charlotte and Dan have become used to dealing with high net worth individuals.

Whilst she won’t reveal names of some of the rich and famous they have worked for, she says they can often be given a working budget that runs into six figures.  These big bashes will typically include such luxuries as designer cakes, swathes of ‘couture’ balloons, theatrical-style floral decorations and hand-made, bespoke party bags for the young guests to take home.

Most important, though is the entertainment, performed by their hand-picked staff, all professional actors like Charlotte and Dan.

They offer dozens of themes, but the perennial favourites with children are Pirates, Princesses, Super Heroes and Fairies.

Always bursting with new ideas, Charlotte and Dan have also developed ‘Mystery Quest’ and Science-themed parties, as well as a Panto featuring the birthday child as the star.

They also offer parties tailored for children with special needs  – which are especially close to their heart since their four year-old son Ollie has autism.

Ironically, they started doing the special needs parties very early on – even before Ollie was diagnosed with Autism Spectrum Disorder.

”We had done a party on the Isle of Wight for a little girl with special needs and at the end, she came and thanked me in sign language – which at the time I did not know” explains Charlotte.

This incident prompted her to learn the Makaton sign language system, which she could use in special needs parties.

What she didn’t realise at the time was that ultimately she would also be using it to communicate with her own son, when he was diagnosed with his particular special needs at the age of almost three.

Catering to the need of every child on their big day is what still drives Dazzle and Fizz, who clearly love every moment of their work.

Dan still works seven days a week as an entertainer, whilst Charlotte devotes five days a week to managing the business as well as looking after their son.

“People tend to get very caught up on the high worth and celebrity of some of our clients but to us, that has never been the most important thing.

“Ultimately it’s about the consultancy we give, listening to people and then delivering their perfect party”.

“To do this kind of job, you do have to indulge your inner child.  When it comes down to it, kids are pretty straightforward and just want to have fun, whereas adults want to put too much reality on the world.  For us, it’s a great thrill to go with a child’s own vision and just make it happen”.

Events can take anything from days to months to plan and organise, but typically Dazzle and Fizz works to a six week planning schedule.

Having said that, they recently delivered a large party overseas, and were abroad for five days with 22 staff, working on the spectacular six-figure event.

Charlotte goes as far as to reveal that they have worked for “British and United Arab Emirates Royal families” but no further – and says that confidentiality is key to the business.

“These people find you – it’s not a case of going out looking for them,” she says.

It’s likely that many more people will be discovering Dazzle and Fizz in 2016, as the year kicks off with them being featured in a BBC2 documentary called The Millionaire’s Gift Guide, which was filmed at an Oxfordshire private home, Aynhoe Park, owned by James Perkins and his partner Sophie Taylor.

After the success of the launch event at Aynhoe Park, Charlotte and Dan found they worked so well with co-owner Sophie that they have entered into a formal partnership with her, and are delighted that she will be joining the team in 2016.

“Yes, I guess you could say we have some big plans!” says Charlotte.  Perhaps the TV programme on January 3 will offer more hints.

Meanwhile Dazzle and Fizz are looking forward to their Christmas with family on the Isle of Wight – and no doubt Charlotte, now 29, will recall the conversation she had with her mum Rosemary over the kitchen table when she was still a student.

“We were looking through a glossy magazine and I pointed to some photos of the kind of parties I’d love to organise.  My mum raised her eyebrows at me and didn’t look very convinced.

“I must say, it’s very satisfying to see your vision unfold.”