The fascination of Thailand

Home|Travel|The fascination of Thailand
Previous Next

The fascination of Thailand 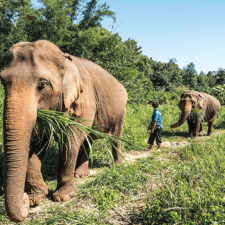 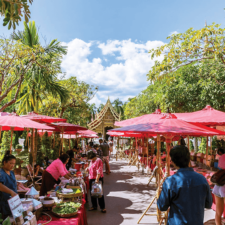 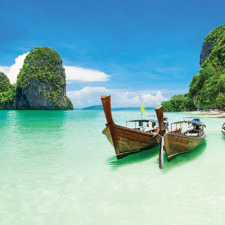 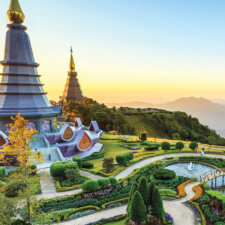 Known as the “land of smiles” and the jewel of south East Asia, Thailand is certainly a travel destination to be savoured, and where anything appears possible!

For some visitors, it is a once-in-a-lifetime experience that offers amazing diversity as well as the bustling city of Bangkok. The district of Chiang Mai has stunning scenery with its backdrop of multiple  islands and beaches, reaching far out to the mountains and national parks, where elephants roam freely alongside exotic birds of prey and an abundance of monkeys.

The elephant in particular is revered by the Thai people, with numerous statues and paintings to be seen everywhere and a desire to share with tourists a hands-on experience of these wonderful creatures. From trekking through the jungle to bathing and assisting with morning feedings, I could not resist booking a full-day elephant day trekking experience, which included a personal guide.

We travelled from base camp into a jungle region for several hours with a troop of the most magnificent elephants with lavish seats provided on each and your own individual guide straddling the top part of the elephant’s neck brandishing a small stick. May I add that the stick was never used, but clearly had some significance in directing the elephant on the desired course. 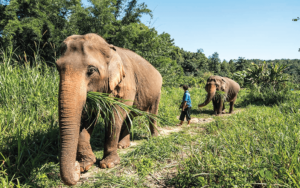 On the day, the whole excursion was in doubt because of very heavy rain which had started early morning and was forecast to continue non- stop for at least 24 hours. However, I was reminded by my own guide that these were the best possible conditions to undertake such trekking as the elephants simply adored water – and lots of it!  I have to say that I was somewhat concerned as we trekked through the narrowest tracks with ravines on both sides, and the slightest error on the part of the elephant could have proved fatal.  However, I could not get over the most delicate and gentle way the elephants moved forward, carefully adjusting the position of their feet as we moved along the tracks. Then the unexpected happened as we were confronted with a collapse of several large trees across the pathway which made it impassable. The guides conversed with one another in loud voices, shouting throughout the troop of some eight elephants. I was positioned on the front elephant with very little prospect of going anywhere. Somehow I never once doubted the expertise of our guides, nor the capabilities of these wonderful creatures, and slowly but surely the following elephants reversed slowly until there was enough room for us to turn.  At this stage I could not envisage how this would be possible but clearly these mighty animals are well-trained over this particular route.  My guide leant forward speaking firmly to my elephant and I could not believe it as, slowly but surely, it completed a three-point turn to enable us to return in another direction. 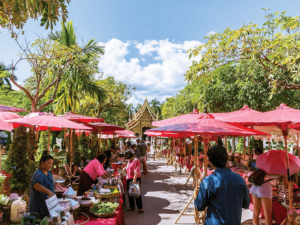 Perhaps the most exhilarating part came at the end of the day, sharing bathing time with the elephants in a very large natural pool area.  The opportunity was given to remain seated on the elephant as it entered the water or to simply watch them from the bank. I could not resist the experience of remaining seated on the elephant as he walked slowly into the water up to its neck and clearly loving every minute as it showered its body – and me incidentally – with water from its trunk, ensuring that after the heat of the day that we had both had a well-deserved shower!

If you do not feel quite so adventurous, the Khao yai National Park offers tourists every opportunity to see elephants roaming in their natural habitat with waterfalls and monkeys and exotic birds of prey in abundance.

Thailand offers the most beautiful landscapes, particularly in the far northern territories of the Island near the western region of the Burmese border, all of which is surrounded by lush jungle terrain. We were able to visit Krabi Province which boasts Thailand’s most famous beaches, considered among the best in the country with white sand and crystal-clear blue waters and where boat trips can be taken to visit surrounding caves of historic interest.

As well as cosying up to elephants and enjoying beaches of this beautiful country it was very much on my agenda to spend at least a day in Bangkok and experience one of the floating markets. The city  remains a main hub for international travel and a starting point for many excursions throughout Thailand. I was determined to experience the famous Grand Palace which has its own historical significance and contains a wealth of craftsmanship. The grounds are a maze of Royal Halls, Temples and ancient relics with numerous Buddhas.  The most impressive is clearly on the south side of the Grand Palace in the Wat Pho “Temple of the reclining Buddha” as this is the oldest and largest temple complex in Bangkok.  The Temple is famous for its enormous gold-plated reclining Buddha, measuring some 46 metres long by 15 metres high. Having been asked to remove our shoes before entering the Temple, which were to be left outside until our departure, we then surprisingly found ourselves in the middle of a short ceremony and had to lie face down on the floor around the Buddha until it concluded. However we had not anticipated that finding and recovering our footwear would be such a task in itself, with hundreds of pairs of shoes left on the outside of the Temple.  Luckily, we had noted the approximate location. The city of Bangkok offers a wealth of Thai speciality foods, with street sellers providing Pad Thai, crab cakes, fried bananas, samosas and fresh fruit shakes all very reasonably priced and all in addition to the array of hand crafted items, paintings, natural handmade soaps and incense oils. 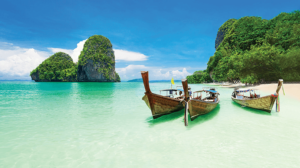 We considered the best way to explore the floating markets was to hire our own long boat and driver and ‘take to the water’-  particularly in view of the very high temperatures that prevail in Bangkok. The floating and fixed waterside stalls were seemingly endless, and every trader without exception seemed keen to sell you something!

With all its stunning diversity, I am sure I shall retain in my memory of Thailand the image of a land of natural beauty, breathtaking scenery and elephants in abundance – in short, a country that simply cannot fail to fascinate.