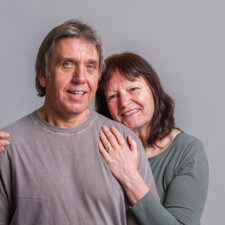 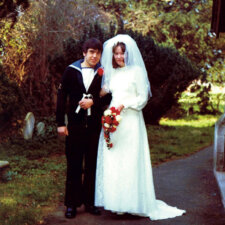 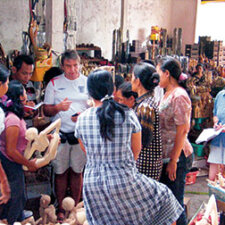 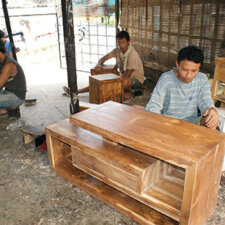 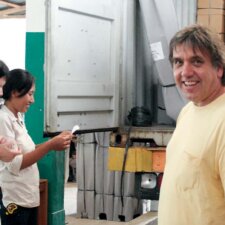 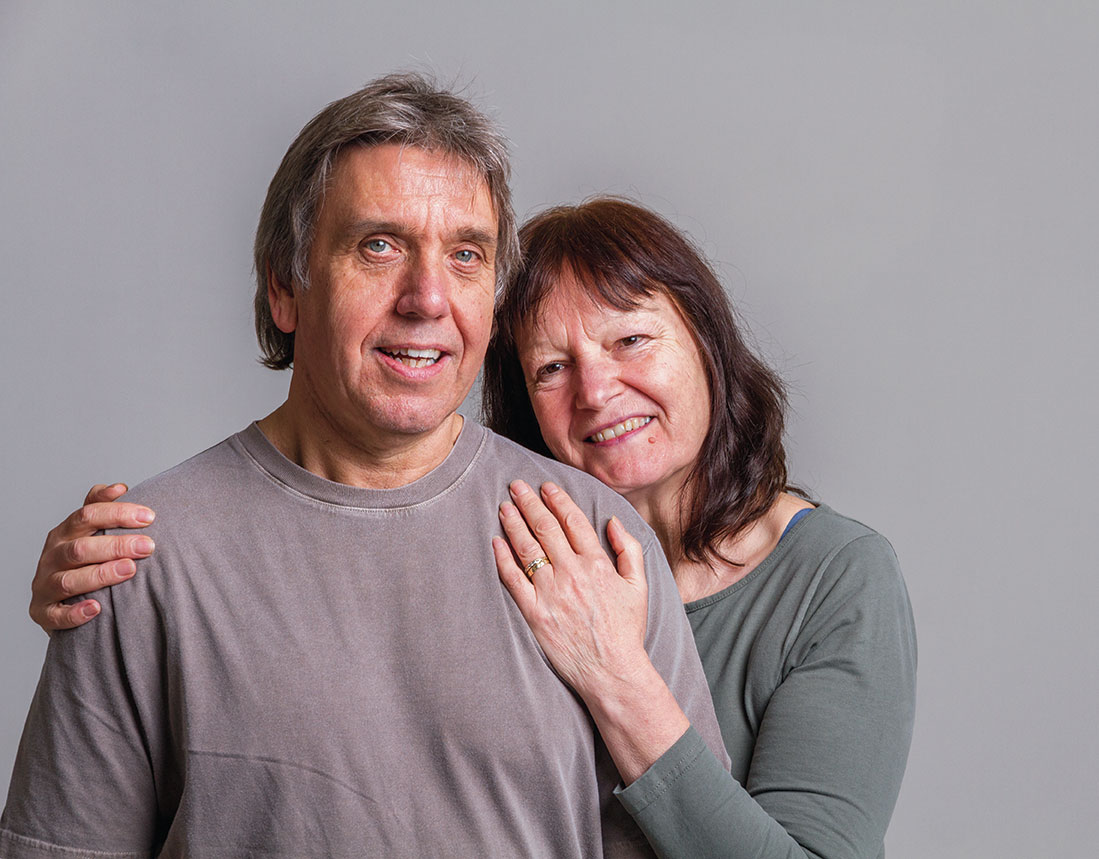 Island couple Alan and Bridget Southwell have created a flourishing business by linking with another island community – in Indonesia.

Getting a serious bash over the head whilst he was working as a prison officer proved to be a life-changing event for Islander Alan Southwell.

The ferocious attack by an inmate with an 11.5 kilo bumping tool knocked former Navy man Alan out cold, and left him with severe double vision and headaches, as well as losing him his driving licence on health grounds for two years.

“I didn’t remember much about it,” he says, “but it definitely changed my life in an instant, because I had to leave the prison service”.

Having already been knocked unconscious twice previously – once during his Naval career and then during an attack with a chair at Pentonville Prison – the only sensible thing to do for his health was to find a less accident-prone way of life.

He admits he didn’t have a clue what he was going to do – but during the two years that it took to fully recuperate from his head injury, he decided to take a horticulture course.

“I really enjoyed learning about plants and I’d heard about something in the States called a ‘plant rental’ service – installing and maintaining plant displays in offices and public areas.

“Nobody was doing this on the Isle of Wight and I reckoned it was a good opportunity”.

Alan’s wife Bridget believed in the business idea so strongly that she promptly gave up her secure job with a building society and joined him, sourcing plants and placing them in hospitals, offices and waiting rooms. 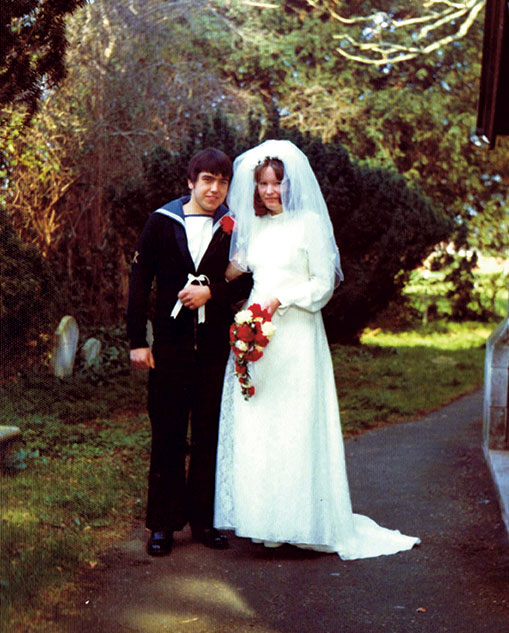 The business, launched in 1992, was named Oasis Interior Landscapes, and that was exactly what it set out to do – create a little green oasis of calm in busy public areas.

“We approached businesses that were paying £10-15 a week to have flowers on their desks, and sold them the idea of renting our plants which would be replaced every couple of months for a cost of around £3 a week – it was a no-brainer really”.

Success came quickly, and was ‘phenomenal’. The business profile grew quickly, and was helped when Alan and Bridget were called upon to do the planting for VIP visits including those of Margaret Thatcher and Princess Diana.

In the early years, the couple operated from the conservatory at their home, sourcing plants direct from Holland and having to drive hundreds of miles to Harwich to collect them.

Gradually, as they made more contacts, they found ways to make their business easier – such as striking up a deal with a Dutch lorry driver to bring supplies to the south coast for pick-up.

By this time, the Southwells were supplying such high-profile clients as County Hall, police stations and parks departments, and it was clear they had outgrown their domestic conservatory as a base for operations.

That was when they moved to their current Oasis site at Brading – but at that time it was a very different proposition to the 3,000 sq. ft. premises that exist today.

“We saw this piece of land on a brown field site and thought it would be ideal for a polycarbonate greenhouse for our plant business,” says Alan.

When it came to financing the project, however, the banks did not want to know.  Undaunted, the couple sold one of their cars and other property to raise as much cash as possible to fund the scheme themselves. With some support from a Dutch company on the supply side of things, they managed to get their new premises up and running and fully stocked without the pressure of borrowing.

“I must admit, it was very satisfying to do it under our own steam, and to this day we don’t owe a penny to the bank”.

As the business continued to grow, the Southwells got planning permission to extend the original greenhouse to the front, which gave them the space to display huge 3-4 metre high plants suitable for atriums.

However, by the second half of the 1990s it was becoming clear that the economy was shifting, and spending on plants became less of a priority for cash-strapped businesses.

“Anything seen as decorative or non-essential was the first thing that accountants put a line through, so we really had to think on our feet and change our business” said Alan.

In addition, EU rules on plant imports were becoming more prohibitive.  “We’d been in business long enough to know you don’t flog a dead horse, and knew it was time for a change of direction.”

This was when Oasis began branching out – sourcing gift and homeware products sourced via UK trade shows and later, from around the world.

Bridget also had the idea of bringing in a florist workshop area, full of sundries and accessories that made it appealing to walk around, and increased the all-important customer footfall.  A coffee shop was added to increase its appeal as a place for people to browse and relax.

What Alan and Bridget had created was a kind of tropical plant house environment that visitors found relaxing to wander around, and buy gifts and things for the home. 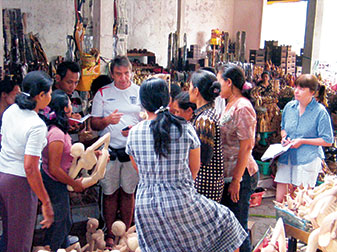 Their next step was to change the way they sourced products – and they were becoming more interested in importing goods direct, rather than buying through wholesalers or other third parties.

They looked at importing from Kenya, Thailand and Mexico – but ultimately it was the island of Bali that drew them.

“We visited the island for our 25th wedding anniversary in 1999 and loved it” says Alan.

Isle of Wight born and bred Alan, and Bridget who’s lived on the Island since she was nine, found that they liked and could identify with the ‘island mindset’ of the Balinese people, most of who work in small family cottage industries rather than big businesses.

This gave the Southwells the opportunity to design their own furniture ranges and other products and have them custom-made by crafts people on Bali. They deal direct with their makers and know them personally, and because there are no middle-men, they can buy competitively, pack their containers without an inch of wasted space, and offer keen prices in their Isle of Wight showroom.

“Bali was a place that we felt confident we could trade with and still have a very strong commitment to fair trade and green issues,” says Alan.

He and Bridget now visit Bali several times a year, and are well recognised on the island. They buy from scores of different families there, and know most of them personally.

“We did make some mistakes at first” he admits, “because it takes time to understand a different culture. But you can’t be scared of making a mistake, or you’d never do anything”.

“We did things like buying the wrong products or in the wrong season, and used to get lots of breakages in shipping, which all costs money.

“But gradually we have found shortcuts to buying, we worked out payment systems with our makers and we pay a premium to our packer who carefully packs things inside other things.  This not only increases the capacity of each container, and means we aren’t paying to transport fresh air – but it has also brought breakages down to about 1 per cent”.

These days, Oasis is shipping in a 40ft container every couple of weeks, expertly handled from the Southampton Docks end by Steve Porter Transport.

The import side of things continues to grow, and at the last count, the Southwells were buying from 178 suppliers, compared to 54 when they began the Bali trade.

A sobering time for Alan and Bridget came in October 2005, with the horrific Bali bombings by terrorists.  They had been on the island just before, and missed the bomb only by a few days.

“It was a bad time for everyone and knowing lots of people there made us feel very involved” said Alan.

The bombings naturally hit the island’s tourism business very hard, and Alan was told by one grandfather that his family was glad to be in the cottage craft industry because  it was continuing to keep them in work despite the devastation.

At the UK end of things, Alan and Bridget continuously aim to come up with new product ideas to feed back to their makers.

They visit trade fairs at home and abroad, as well as other businesses all over the UK to keep a finger on trends and look out for their next ‘big thing’.

Their furniture range has done especially well, with pieces designed on the Isle of Wight being made up by makers on the Island of Bali, 16,000 miles away.

Buyers love the pieces in whitewashed, shellac and natural teak, the quirky designs made from huge teak roots, and more recently the reclaimed items made from boat wood.

Not surprisingly, Islanders are especially drawn to furniture made from the wrecks of sailing boats – in this case, Japanese ones.

“One wrecked boat will make a lot of furniture” says Alan, “and it’s a great way of recycling!” 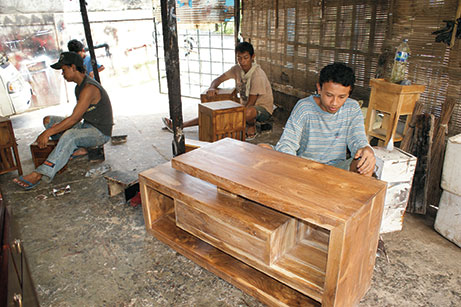 So where do Alan and Bridget see Oasis going next?  Well it certainly won’t be off the Isle of Wight, despite business offers that have tried to lure them to other locations.

“A Thai company wanted to buy us out and roll the business model out to a number of locations” said Alan.  “Then we were offered a place in Jersey which could have been very lucrative, but running a business can be very hard if you’re not there.  After a lot of long hard thought we decided it was too much to take on.

“We like this business and enjoy what we are doing – talking to customers all the time, designing our own products, travelling around.  We are away for about four months of the year”.

But they say they’ll continue to develop and grow – because there’s no standing still in this business.

It now employs 37 people including their son Neil, who brings a different generational approach.  As a photographer and designer, he is responsible for a range of popular art canvases featuring Island events and scenes, including the V-Dub Festival and Scooter Rally.

Their daughter Sharon was also involved in the business until recently when she moved with her husband to his native Canada.

For Alan and Bridget, who married at the age of 18 and have grown up together to form a formidable team, Oasis will continue to be a passion.

“We don’t have any hobbies so we’ve tended to pour all our energies into the business.

It’s given us a really enjoyable way of life – and we like to think that we have been able to put something back”.