Taking a trip to Toronto

Home|Travel|Taking a trip to Toronto
Previous Next

Taking a trip to Toronto 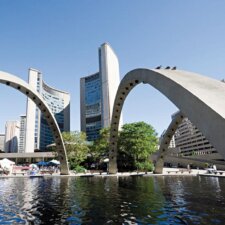 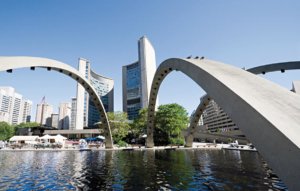 French trappers were the first Europeans in Ontario arriving around 1615, and having fought their way through the thickly forested peninsular for many years without establishing a settlement, in 1720, a small trading post was established where Toronto now stands, writes Terry Willey.

When the British arrived in 1788, they called the settlement that they founded York. Toronto did not receive its present name until 1834. Immigrants from all over the world flocked to the city in the trail of its English and Scottish founders.

There is so much to see and do in Toronto and as my wife and I walked through the city we got a real feeling of welcome, friendship and genuine care. This was highlighted when I was simply in discussion with my friends, who travelled with us, concerning the whereabouts of a particular location. A young man approached us and said ‘excuse me, but I overheard you and may I help you?’ We were all taken back by the genuine care and desire to assist us.

A visit to the CN Tower standing 553 metres tall, must not be missed. This skyline attraction arrived in Toronto in 1976 and has now been joined by many other buildings such as the Rogers Centre and the Sky Dome Stadium which sits at the foot of the Tower. To the east and downtown Toronto there is a new hockey and basketball arena and the Air Canada Centre. It is clear that Toronto is a sports-loving city. It also boasts the largest financial centre in Canada while by night the Cosmopolitan City, which stands on Lake Ontario, becomes one of the most pulsating centres of art and entertainment. 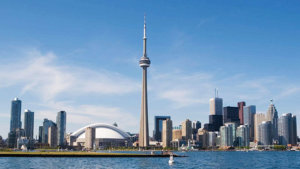 Its location makes it accessible to many other attractions including the famous Niagara Falls. When you arrive at this location there are many options to either take a boat known as the Lady of the Mist in close proximity of the Falls; a helicopter over the Falls or a walking journey behind the Falls where you are presented with ponchos to avoid you getting absolutely drenched. You also experience millions of tons of water falling a few feet from the visitors’ gallery directly underneath the Falls themselves.

Literally on the doorstep of Toronto lies the Toronto Island which is located in the harbour directly opposite the city centre. Both tourists and city residents have frequented these since 1858 when a storm separated what had been a peninsular from the mainland but are accessed via ferries.

Uniquely these Islands are an entirely pedestrian zone with no cars allowed and today the Islands represent a wonderful place to relax and enjoy an unparalleled view of the city skyline reflected in the waters of Lake Ontario. Beneath the city lies another underground city with a wonderful array of shopping options. Whether you are taking a short break or a longer holiday, Toronto has so much to offer and with passion to welcome visitors.