Home|Interviews|Sue Paraskeva: Sue smashes it with ceramics business
Previous Next 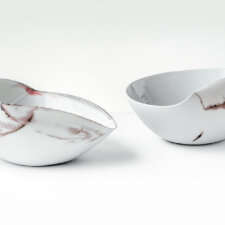 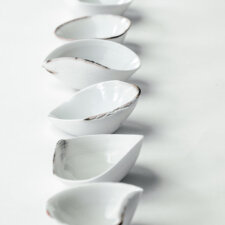 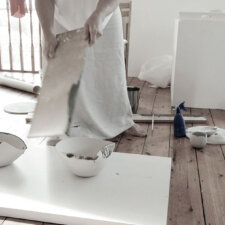 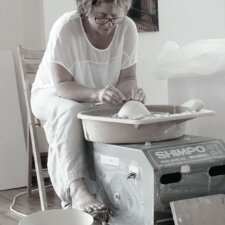 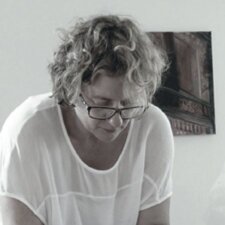 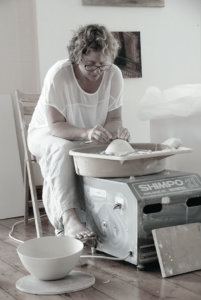 Taking home the Premier Ford Small Business trophy from this year’s Isle of Wight Venus Awards was Ryde-based ceramic artist Sue Paraskeva, who has turned her distinctive high-end art into a thriving international business with some big-name clients. Jackie McCarrick has been finding out more about the woman and her work.

There can’t be many art graduates who get their first commission out of college from an A-list film star – but that’s exactly how it happened for Sue in 1995, on leaving Middlesex University with a BA Honours in 3-D Design, specialising in ceramics.

She was the only student who sent in slides of her work for a feature in the style bible Elle Decoration magazine – and when they were published, they attracted the attention of Kevin Costner’s interior designer.

So, just starting out at the tender age of 23, her first commission was to design and produce 94 pieces of hand-thrown tableware for the Hollywood star. “It was a very steep learning curve!” recalls Sue.

She set up a workshop in London on the back of it, and so her life as a working artist began.

As her reputation grew, she was invited to exhibit work in such high-profile venues as the Victoria and Albert Museum, Royal Festival Hall and Bonhams, as well as galleries and shows in Edinburgh, Oxford, Bath, Munich and London.

However, despite enjoying the buzz of working in the city, Sue says that she always had a yearning to be close to the beach. 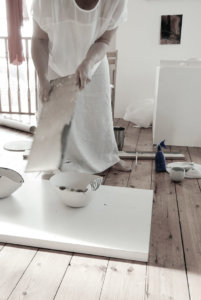 “I’m a beach lover and always have been since I was a little girl,” she says.  “I used to love going to Bognor and other south coast resorts”.

Not surprisingly, a lot of Sue’s creative work is influenced by the shapes, colours and textures of the beach – and many people have remarked that her fine porcelain pieces have a distinct shell-like quality.

She jokily admits that by the late 1990s she was looking for what she calls her “Get out of London card” – and that turned up for her in the year 2000 when she was awarded a three-year residency at the Quay Arts Centre in Newport, on a Lottery-funded grant of £5,000 a year.

“I was absolutely delighted,” she says.  “It meant I could be close to the beach, I had a free studio and kiln time, and I managed to buy what was probably the last house on the Island at a price of £50,000 – a little terraced house in Ryde that needed loads of work.

“But for a Londoner who had spent two cold winters living in the workshop, it was a fantastic opportunity to buy my own little place in a lovely environment”. 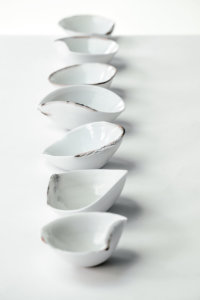 The studio space at Quay Arts also came with a gas-fired kiln (rather than the usual electric), which enabled Sue to develop her particular way of working with fine porcelain – and it’s a method she continues to use in her own workshop to this day.

“My life would be a whole lot easier with an electric kiln!” she says, “but gas is the classic way of firing, and is used by the Chinese and Japanese who are masters of porcelain”.

Since arriving on the Island and establishing her home and business here, Sue has continued to exhibit her work widely all over the UK, from Portsmouth to Fort William, Norfolk to Middlesborough, as well as London and Paris.

Somehow she manages to maintain that delicate balance between creative and commercial art – and she does it by producing high-end ranges of tableware, as well as her more decorative exhibition pieces.

Her tableware – beautifully understated porcelain bowls, plates and mugs in simple clean shapes and colours – are sold to outlets such as Calvin Klein Home in Madison Avenue, New York, London’s Design Museum Shop, Liz Earle on the Kings Road, and the online stores of Herriott Grace (based in Canada) and Toast Home.

She was also commissioned by TV chef Tom Kerridge – who described Sue’s plates as “the best he’d ever seen” – to make tableware for his Hand and Flowers restaurant in Marlow, Buckinghamshire.

For these she used her distinctive “altered edge” technique that has become a hallmark of her work – and which is now taking her in the novel and somewhat quirky direction of  ‘performance ceramics’.

The technique involves smashing the edge of pots with wood that’s been ‘painted’ with coloured slip to achieve a one-off effect in terms of colour and shape.  It was a technique she first used on the Kevin Costner commission, and is now bringing back into play.

“I guess you could say that smashing pots is not a normal thing!” she laughs, “but it’s a great way to make a range of one-off vessels.  The thrown vessel is a starting point for me:  I make it very fine, so there’s a lot you can do with it in the drying stages”.

This unique way of working came about after Sue was asked to speak and demonstrate at a symposium in Israel.

“I was on stage in front of 300 people and felt I had to raise my game a bit,” she explains.  “I ended up dropping a piece of wood onto a vessel I’d made, and turned it into a performance.

“The crowd screamed – but the work that resulted was really dramatic”.

Since then, Sue has done two other such ‘performances’, including one on the Island – and it’s something she’s interested in developing.

“I don’t talk during the performance, it’s all very minimalist,” she says, “but I’ve started to incorporate music.

“It gives an audience a real insight into how I work, because in my studio I tend to be silent, or have music on in the background”.

Her next “smashing performance” is scheduled for May 6 – 7 at the CAA Gallery in London, as part of London Craft Week. 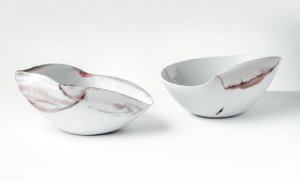 As a single mum to sons George, 13 and Will, 11, Sue is familiar with the endless juggling of work and home.

A typical day will see her nipping to the studio round the corner from home at around 7.30am to fire up the kiln, then dashing back to do breakfast for the boys, getting them off to school and walking Lucy the dog on the beach, before heading back to the studio to start work.

“I try to take weekends off and work around school hours,” she says, “and the boys are great – they both get it”.

In fact, both her sons are keen on art and music and like mum, both play piano.

For Sue, the piano is great exercise for her fingers, which tend to take a hammering during her heavy work with the clay.

“It’s a very physical job so I have to take care of myself” she says.

As well as the piano playing, her other big switch-off pastime is swimming.  She dives into Ryde pool three times a week and is building up her strength for a planned three-mile swim across the Solent.

Apart from that, she nips across the Solent by ferry on a pretty regular basis for business and exhibition trips to London.

“It’s very accessible from here so I really do get the best of both worlds”.

She admits that had she not been in London at the start of her career and been able to make such high-profile contacts and connections, it’s unlikely that the business would have taken off in the way it has.

Nowadays, though, she posts commissions off all around the world from her Ryde base and says the export side of the business in high-end tableware is growing rapidly.

Looking forward, she says she’d love to find a workshop with a sea view next – and would like to exhibit her work in Japan, a world Mecca for ceramics.

But she’s also keen to continue doing hanging displays and large installation pieces – such as the one she completed for the NHS at Ryde Community Clinic.

The four large wall pieces – two for the waiting room and two for the phlebotomy clinic – were created as healing pieces, to create an aura of calm. The altered porcelain work was inspired by the beach, and by patterns created by blood cells.

“I know some people object to NHS funds being used for art but it really can have a very powerful effect on an atmosphere, and that’s what I strive for,” says Sue.

She says she enjoys being part of the close and supportive artistic community on the Island, and is one of several resident exhibitors at The Depozitory Gallery in Ryde.

“Yes, the Island will be home for the foreseeable future” she says. “It’s a fabulous place to be, a lovely place to bring up children, and there are plenty of like-minded artists around”.

Not forgetting the beach, of course …

* Look out for an Open Studios event at The Depozitory with work by 11 guest artists as well as Sue and the other five resident ones, from July 22-25.