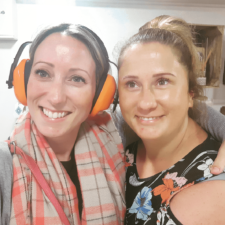 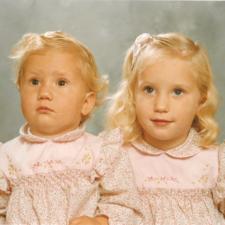 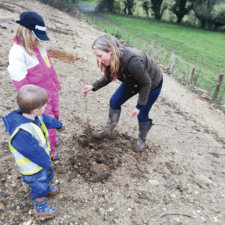 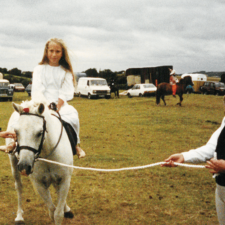 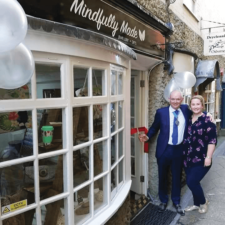 Often dressed in identical outfits, the two little girls would go to Irish dancing classes together, played in the same school band, and enjoyed the typical outdoors rough-and-tumble of climbing trees and riding their bikes.  Now, both mothers in their 30s, they’re supporting each other once again as they each work to build their own eco-friendly businesses.

All that running around in fields and on beaches, riding their ponies and picking flowers, clearly left a deep imprint on Charlotte and Gabbie  – and it shows in the kind of earth-friendly businesses they have each chosen to develop.

Younger sister Gabbie led the way by launching her handmade jewellery shop Mindfully Made, in Newport’s quaint Watchbell Lane last year.  Then, not long afterwards, Charlotte started making her own aromatherapy-type candles from the farmhouse kitchen at her home, and loved it so much that  she created her Duxmore Botanics brand, initially showcasing the products at Gabbie’s shop.

Charlotte explains the timing:  “We lost our father in 2018 and I guess this gave us both the realisation we both needed to go and grab opportunities whilst they are there, and live for every day. There is nothing that can prepare you for losing a parent and the pain is indescribable”.

The girls were children number three and four in a lively family of five, and attended Westmont School nursery, followed by St. Thomas of Canterbury in Carisbrooke, Archbishop King Middle school and then Carisbrooke High School.

“Charlotte was always the protective big sister to me through school” says Gabbie, “but nowadays I think we are equally protective of each other”. 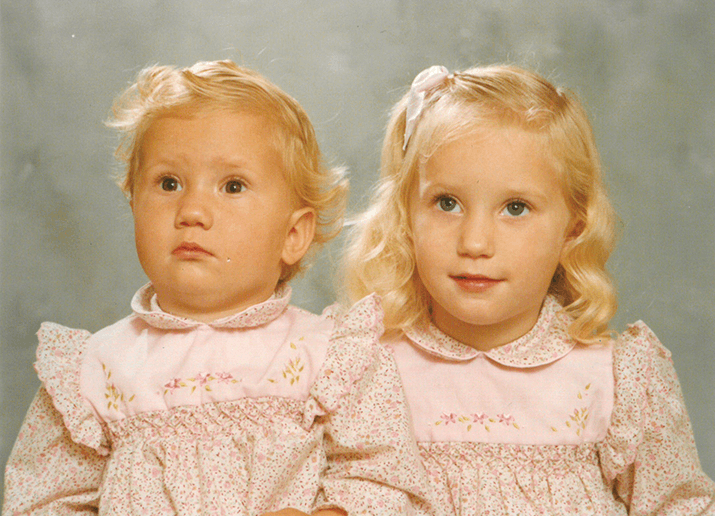 The sisters always enjoyed playing in the garden, typically making ‘perfume’ from rose petals and water, making mud pies and digging for clay at the bottom of the garden.  “Our imaginations never seemed to fail us”.

Irish dancing also played a huge part in their childhood, and both took lessons from the age of four or five, right up until their teens. As members of Shamrock and Thistles dance school, run by Ann Neale, they competed all over the UK, and went on trips to Ireland, enjoying workshops with professional dancers and performing at various venues.  They also went to Saturday morning band practice at Medina High School, where Charlotte played the clarinet and Gabbie the flute.

“Our mother was a farmer’s daughter who always wanted us to experience some of the things that she had not” recalls Charlotte. “That’s why Gabbie and I came to be involved with the local dance school and local orchestras. Together we travelled the country competing in Irish dance competitions, and Charlotte travelled Europe with the orchestras”.

Horses also featured strongly in their lives, and both girls were members off the IoW Pony Club as well as having riding lessons with Sandy Bailey-Hunt at Mountalifan Riding Stables on the outskirts of Newport. Gabbie recalls that she was lucky enough to have a pony of her own for a short while  –  Tiny, a white with pink nose and blue eyes.

Charlotte describes her own fondest memories as being the simple things: “Running around fields, exploring wild flowers and wandering through the countryside checking out the flora and fauna”.

Making rose petal perfume was a particular favourite pastime of hers – and there’s a distinct whiff of that experience in the aromatherapy career path that she ultimately followed.

While Gabbie spent much of her early teens playing in the countryside with her friends, Charlotte says she chose to devote much of her free time at the neighbouring restaurant, Valentino’s, and was keen to get to work from a young age.

“I would turn my hand to anything” she says, “whether that was cooking, cleaning, laundry or painting. I liked to be busy and I know Gabbie will always agree that I received the ‘energy gene’!”

Then, in 2001, Charlotte was given the opportunity of taking part in a reflexology course, when a friend returned from the mainland to set up her own holistic therapy school on the Island.

“At the time, I thought it was a ‘nice thing to do’, but I quickly found myself engrossed in Anatomy and Physiology and totally fascinated by the way our body reacts to holistic therapy treatments” she recalls. 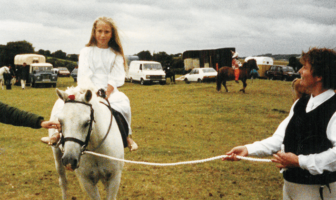 This led her on to complete several holistic therapy courses, including Aromatherapy – and she reckons that it was there that she connected with her younger self and re-lived those days observing wild flowers as a child.

Realising at that point that she wanted to work with botanicals, Charlotte took a job at Liz Earle Beauty Company,  working in the customer care department.  From there,  she worked her way through to New Product Development and ultimately worked on over 70 products, from concept through to delivery to the warehouse.

“It was literally my dream job”  says Charlotte, who was enabled to take courses in Botany and Cosmetic Science, under the Society of Cosmetic Scientists.

Meanwhile at that time, Gabbie was enjoying the somewhat different experience of being a young mum from the age of 21 – but when son Josh started nursery at 2 ½ , she was ready to take a job at local company IFPL (Inflight Peripherals), owned at the time by Geoff and Claire Underwood.

Her job was working in electronics production, soldering and assembling components for Inflight entertainment systems, which she did for six years, followed by a year in the Quality and Inspection Department. Then, after meeting her now-husband, Laurie, Gabbie felt ready for change and left IFPL to consider her next steps.

A year later she had her answer – and followed her artistic instincts to complete a Diploma in Creative Jewellery at The London Jewellery School, based in Hatton Garden.

“I obviously had enjoyed some aspects of my electronics work – making things with a keen eye for detail” she says, “and this all helped during my jewellery diploma”.

Towards the end of her diploma, Gabbie was expecting her second son, Harvey, and for a while after he was born, she had little time to make jewellery.

It was only in June 2018 that she began attending The Jewellery Cabin on the Island – back then, still a relatively new teaching facility. She attended every week for about a year and says it was fun getting back into the swing of the jewellery world, and particularly rewarding to be focussing more on silver-smithing.

Alongside The Jewellery Cabin, for almost a year, Gabbie worked alongside and was tutored by Guy Morey of G&M Jewellers in Ryde. 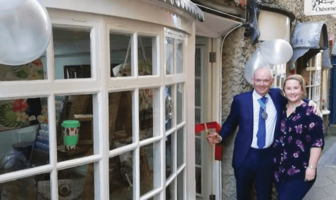 “That came with mixed feelings” she says. “Fear – because Guy, with over 40 years’ experience, is amazing – and fortunate, because learning from someone so talented was an honour”.

And at the end of her training with Guy, Gabbie departed G&M Jewellers to realise a dream and open her own shop, Mindfully Made.

“It originally came about via a friend on the local Jewellers group chat” she recalls.  “An advert was shared of a shop to rent – the rent was reasonable and was beautifully situated in the quaint Watchbell Lane.

Originally, there were going to be two or three people running the business, but for various reasons, others had to pull out and Gabbie was left with the choice of backing out or going it alone.

“I was already excited about the idea, so with the support of my husband, I went for it!” she says.

The ethos of Mindfully Made is to sell products that are sustainable and kind to the environment, so alongside the handmade jewellery from Gabbie and her fellow jeweller Hayley Gardiner, there are also handmade soaps and bath bombs, Island-made leather purses, bags, tassels and totes and bathroom ranges – and of course, more recently,  sister Charlotte’s Duxmore Botanics branded candles, reed diffusers, room sprays and body care products.

Of her leap into business on her own, mum-of-three Charlotte says:  “I was feeling motivated, after 13 years at Liz Earle Beauty Company, and decided to venture out on my own, under my own brand.

“Initially, I decided just to make some candles for my sister’s Mindfully Made shop –  but found I enjoyed being back in the lab again so much that this quickly led me adding reed diffusers, room sprays and body care products. I loved everything Gabbie’s shop stood for and felt that my products would be a great fit”.

She says her brand design is inspired by the Island’s scenery, and based on the colours of local wildflowers and the ever-changing landscapes.

“My range has an aromatherapy-style approach, using pure essential oils at levels that make a difference, and plant oils that have good efficacy and data – that make a real difference to how our skin looks and feels”.

Now living on a farm, in a house that she and her husband built, Charlotte says she’s happy that her three youngsters can live the same kind of outdoorsy childhood she did, with toasted marshmallows over camp fires, building dens out of fallen wood, making pressed flower collages and stencilling fallen leaves.

“The children very much respect nature and the environment that surrounds us and we often plant new trees to encourage new growth and important habitats and shelter for animals” says Charlotte,  “so whatever path they may choose to take in the future, I know that their hearts will always be in the countryside”.