Setting sail for Round Island event

Setting sail for Round Island event 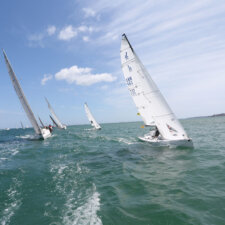 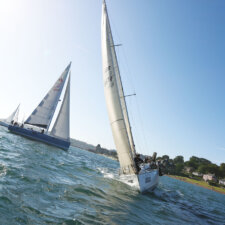 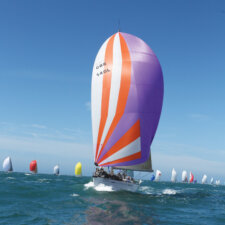 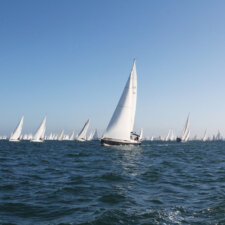 Hundreds of world-class sailors will be taking to the Solent to race against first-timers and family groups on July 7th, when the Island Sailing Club’s flagship Round the Island Race transforms our waters into the annual spectacle of colour and movement. It’s an event that has certainly come a long way since its early incarnation in 1931, as we discover here.

It was a mischievous idea from Major Cyril Windeler back in 1930 that led to the birth of the iconic Round the Island Race that we know today. The Major, a keen member of ISC, was the one who suggested a handicap race around the Isle of Wight to cater exclusively for smaller boats, from five to 25 tons. It may have been a quiet joke at the expense of the Royal Yacht Squadron – who had specified that their members must own a yacht of a minimum 30 tons. 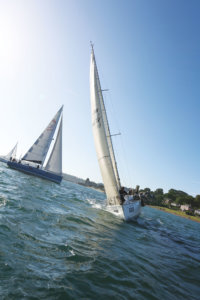 But whatever the Major’s private motivation may have been, the first race duly took place in 1931, with just 25 entries – and it was indeed one of the smaller boats that won:  a 22-foot Cornish fishing boat named Merry Conceit, skippered by Peter Brett, who had bought it with his friend Henry Trefusis for the princely sum of £45.

The winners became the first to be awarded the now-legendary Gold Roman Bowl, which was copied from the one that Major Windeler had seen on display in a goldsmith’s near the site of a Roman wharf in London, having been dredged up from the River Thames. The Major loved the design so much that he ordered a replica to be made by Bruce Benzie, the Cowes jewellers.

It wasn’t until 1939, though, that Major Windeler finally managed to win the trophy himself, sailing a seven-ton auxiliary cutter Kalliste.  After his triumph, there followed a break of seven years for the race, during the period when all private and leisure sailing was banned for the duration of World War II.

Until the mid 1970s, the event demanded maximum dedication from the race officers, as the race had no specified time limit. In fact, senior Island Sailing Club members have vivid memories of keeping a lonely vigil in a launch until long after dark, awaiting the stragglers! In those days, three green lights on a pole, powered by a car battery, marked the line.

Nowadays, the ISC race management team, afloat and ashore, numbers over 160, whilst the race itself regularly attracts over 1,400 boats and around 15,000 sailors – making it one of the largest yacht races in the world and the fourth largest participation sporting event in the UK, after the London Marathon and the Great North and South Runs.

Competitors come from all over the UK, other parts of Europe and as far away as the USA to follow the 50 nautical mile course round the Island. Starting on the famous Royal Yacht Squadron line in Cowes, the fleet races westabout, to The Needles, round St Catherine’s Point and Bembridge Ledge buoy, and back into the Solent to the finish line at Cowes.

For spectators, it’s a great opportunity to watch elite sailors racing against less experienced enthusiasts, families and sailing clubs – from vantage points both on the Isle of Wight and over on the mainland.

Race management procedures have also become unbelievably faster over the years. In the early 1970s, the General Electric Information Service Company began to organise race results, which meant the onerous task of calculating times and rating factors did not have to be carried out manually. A week before the race, the hefty GEISCO equipment would arrive to be installed in the Club’s reading room and it would take engineers a full day to set up the system and connect it to lines specially provided by the GPO. Results would not be calculated until the final deadline of 9.30pm, with the lucky winners being called out by the Club Secretary the following morning.

Thanks to the latest technology, though, even those who can’t get to watch in person can keep an eye on the race’s progress on the ISC website, via a live text commentary and unique boat tracking facility.

These days, the results are processed by Next Generation Results who can ensure that hand-written finishing records reach the results room, (still known as “The Bunker”) despite Cowes Combined Clubs’ excellent new facilities, within a matter of minutes.

Both competitors and spectators can  then see fast on-screen results flashed up on Event TV sites in Cowes, or pick them up from around the world via the dedicated website. 2008 saw an even bigger march forward in technology when declarations could be made by mobile phone text messaging – sending the old floating “dec barge” system into retirement.

This was followed by the introduction of GPS tracking in 2010 and the launch of the race’s own dedicated broadcast TV channel, RTI-TV in 2015, allowing friends, family and sailing fans around the world to follow the race online. During this period, social media also became a popular communication platform amongst the younger generation, providing a quick and easy way to increase communication throughout the large Round the Island Race community.

Although the majority of the fleet can take many hours to complete the race, the course records stand at 3h 43m 50s for a monohull boat, set by Mike Slade on ICAP Leopard in 2013, and 2h 22m 23s for a multihull boat, set by Ned Collier Wakefield on Concise 10 in 2017.

Not surprisingly, record breaking has become an important feature of the race, especially since a multihull class was introduced in 1961. The course record in 1962 was set by Don Robertson at 5 hours 50 minutes, but by the 50th anniversary of the race in 1986, things had speeded up and “Paragon”, sailed by Mike Whipp and Olympic medallist Rodney Pattison, practically flew round in 3 hours 55 minutes and 28 seconds, creating a new record.

This stood until 2001 when Francis Joyon and ‘Idec’ recorded a time of of 3 hours 8 minutes and 29 seconds – a record that was not to be beaten until 2013, when Sir Ben Ainslie helmed his AC45 catamaran to post the first sub-three-hour race with an amazing time of 2 hours 52 minutes and 15 seconds. Three years later, Lloyd Thornburg’s Phaedo3 took an astonishing 30 minutes off this record – a time that was beaten again in 2017 by just 60 seconds when Ned Collier Wakefield finished the race in just 2 hours 22 minutes and 23 seconds on Concise 10.

The current record holder, property developer Mike Slade, has broken the monohull record on five occasions, firstly in 1991 sailing “Ocean Leopard”. He then did 23 minutes better in 1996 sailing “Hoya Longabarda” and further improved in 2001 with “Skandia Life Leopard” at 4 hours 5 minutes and 40 seconds. The lively conditions in 2008 enabled him to break his own record once more in “ICAP Leopard”, and the near-perfect conditions of 2013 allowed ICAP Leopard to shave a further 10 minutes off her own record, posting an elapsed time of 3 hours 43 minutes and 50 seconds.

A race for all

Race organisers stress that Round the Island Race is not just aimed at elite sailors, and are keen to promote wider participation from sailors of all generations and experience levels. As a result, this year’s edition of the race brings with it the new #ItsYourRace campaign, encouraging competitors to create their own ‘race within the race’.

Using the tracker, competitors can select individual boats to follow and race against, increasing the competitive element within a 1600-strong fleet.

Marinas, clubs, friends and families are all encouraged to create their own ‘race within the race’ under the new #ItsYourRace campaign, which will be running alongside the long-standing message of the race, #RaceForAll.

“We very much look forward to seeing everyone on the start line on the 7th July for another great Round the Island Race.”

Spectators can find many vantage points, both on the mainland and Isle of Wight, to watch the race progress. The boats cross the start line at Cowes in 11 separate groups, starting every 10 minutes from 06.30 until 08.10am, heading in a westerly direction towards Yarmouth. You can find more information about where the boats typically are at different times during the day checking the website.

One thing’s for sure, the Race continues to run true to Cyril Windeler’s original aspirations – and everybody still loves it when those small boats, perhaps finishing well into the evening, manage to carry off the top prizes.