Ron Gatland: Ron still enjoys his life behind the wheel

Home|Interviews|Ron Gatland: Ron still enjoys his life behind the wheel
Previous Next

Ron Gatland: Ron still enjoys his life behind the wheel 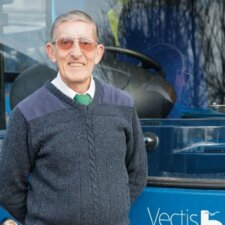 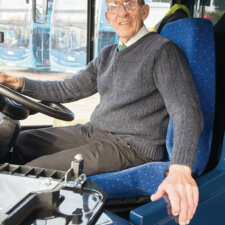 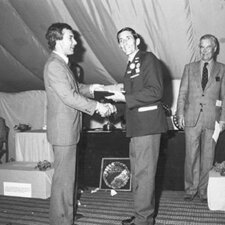 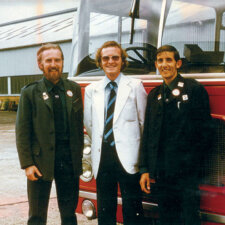 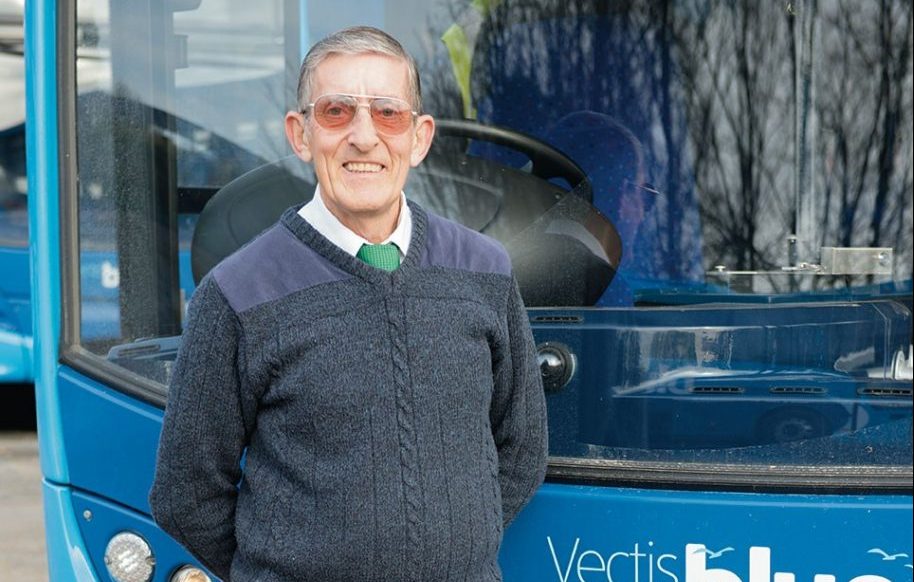 Ron Gatland was just five years old when he decided he wanted to be a bus driver when he grew up. Before he reached his 22nd birthday his boyhood dream had been fulfilled, and he is still enjoying life behind the wheel – even though he officially ‘retired’ 18 months ago.

Ron has not just driven all over the Island, but to numerous destinations on the mainland, and across Europe. He said: “The job today is not what it was when I started all those years ago, but I have loved every minute of it, and I wouldn’t change a single day. If I won the lottery I would still do it.”

He has driven every type of bus and coach imaginable; from old-style buses without power steering and a 30mph limit, to plush coaches capable of completing a 1,000-miles round trip to Scotland inside five days. He won Southern Vectis Driver of the Year no fewer than six times, and represented the company in the National Finals on several occasions. 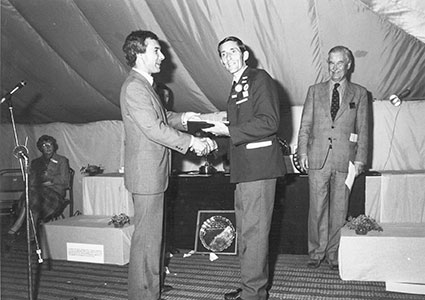 He was born in Dartford Kent in 1947 and then moved to a small village between Rye and Hastings. He said: “I was five years old and I remember watching a single-deck, half cab bus coming through the village twice a day. In the hop picking season a big double-decker bus used to come by – to me it looked a monster coming down the road. My mum, dad and I would get on the bus and I would run straight up and stand behind the driver watching him drive down to the hop gardens. I used to do that every day, and my mind was made up, I wanted to do that one day.”

Ron admits he didn’t like school, leaving at 15 to start work for the Co-op as a delivery boy, riding a bike with a big basket on the front. He said:” I have been on the road one way or another ever since.”

He gained his driving licence to drive electric powered vehicles when he was 16, and soon had his own round, delivering bread in an electric baker’s van to 400 customers. A year later he passed his test to drive petrol vehicles.

Ron soon met a young lady named Nicky, later to become his wife, and when she and her mother moved to the Island in 1966, he moved down here with them, getting a transfer to the Co-op bakery in Shanklin, and within three weeks he had his own round in West Wight. He also had a spell as a milk man, but as he was approaching his 21st birthday he went to Moss Motors in Sandown to obtain his PSV license. He said: “I went out about half a dozen times, passed my test and on my 21st birthday got my licence. I went to Southern Vectis but only had a single-deck licence, and they told me I would need an upgrading test. I drove a double-decker bus from Robin Hill to Shanklin, went back a couple of days later and drove it to Ryde; around on the town, took my test later that day and passed.” 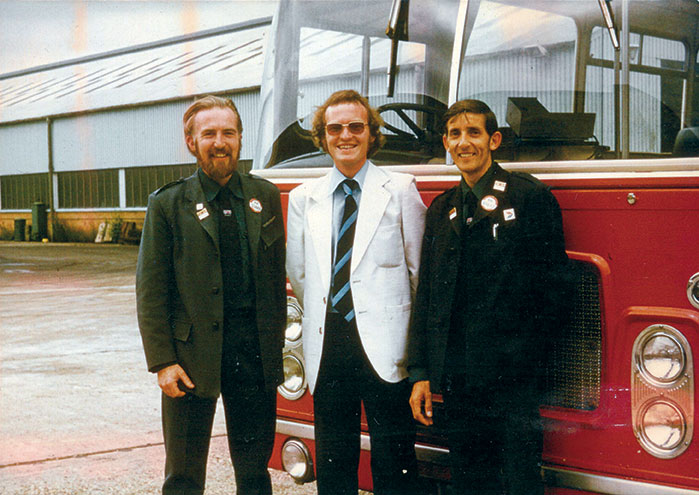 Ron and his family briefly moved to the New Forest where he worked for the Hants and Dorset bus company. He said: “While I was there I was the first man to drive a single-decker one-man operated bus from Lymington to Southampton. I didn’t like the one-man buses as much because you missed the banter, but I got used to them. But I do recall my boss once saying to me there are two things to remember in this industry; the comfort and safety of your passengers is paramount, And never invite danger. They still stick with me to this day.”

But he admits: “There was stuff we got away with in those days that you would be sacked for now, but we never upset anyone. I held the record for going round a roundabout seven times in a row near Christchurch. Imagine what would happen if you did that now.”

One day Ron received a phone call from a friend on the Island saying Southern Vectis were recruiting again, so he returned here in May 1971 to begin his long journey with the local bus company, along with the fun. He said: “It was like the little old lady who asked me if my bus stopped at Cowes, and I told her there would be a big splash if we didn’t! If you said that today you would get reported, but in those days they would just laugh.

“I used to work with a man called Tony Buckland, who was a fun guy. One day we were going from Shanklin to Ryde, and picked up a man wearing a white suit, white shoes, and he had two white suitcases. He got on the bus and when we got to Ryde there was uproar because we had left his suitcases behind. Tony told the man ‘your suitcases are back in Shanklin where you left them on the side of the road–I’m a conductor not a porter’! The cases were still standing in the same spot when we came back through Shanklin.” 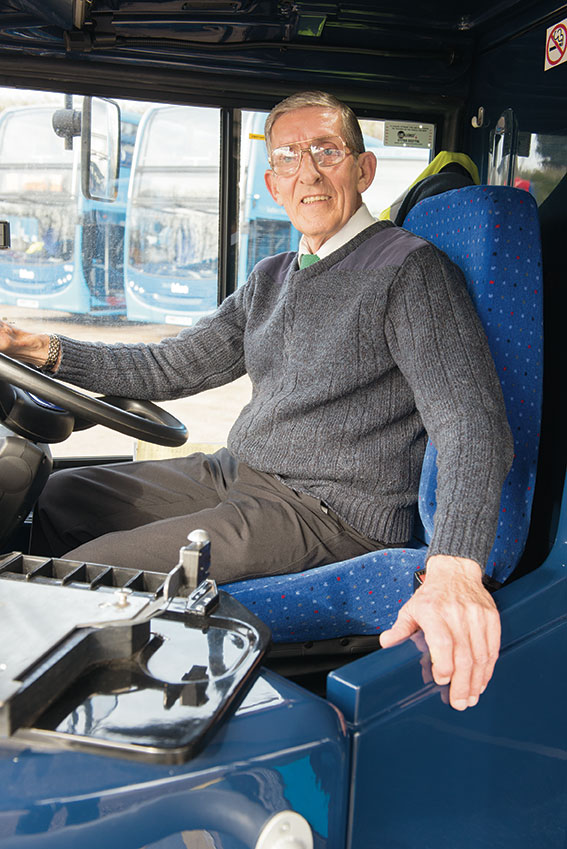 His favourite Island route was the No16, from Shanklin to Ryde, then through to Blackgang via Ventnor, and back to Shanklin. “Riding through the Undercliff in a double-decker bus was lovely – unfortunately I don’t think we will ever see it again,” he said.

His 14 years as a coach driver for Southern Vectis started by chance when he covered for a driver who stood on a fire extinguisher, let it off and had to go off sick. He enjoyed coaches enormously driving up and down the mainland, particularly from Sheffield to the Ocean Hotel, Sandown, but even went as far as Scotland. He claims the trip to Southend was the worst because he never had any more than six passengers at any one time.

He often took tourists overnight to Paris, where there was just enough time for a flying sightseeing trip and a bit of shopping before he was heading back to the Island. And when Southern Vectis ended their coach operation, Ron returned to driving buses.

He smiled: “I actually retired on August 4, 2012. But within a few weeks I was getting phone calls asking if I could help them out. I will carry on as long as I keep passing my medical every year. It hasn’t been much of a retirement; the good lady has about 4,000 jobs for me to do around the house but I haven’t got round to them yet!”