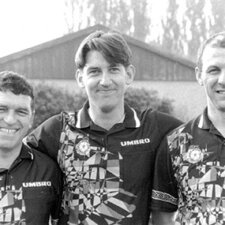 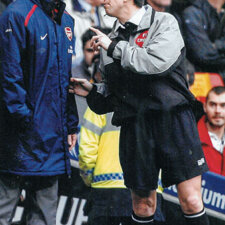 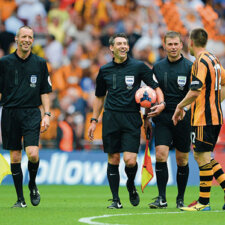 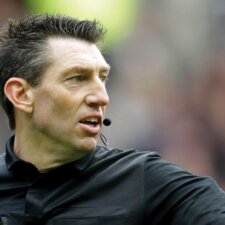 Lee received the ultimate honour earlier this year when he was chosen to referee the FA Cup final between Arsenal and Hull City. It was a day he and his family will never forget, and one that he never expected until he received a surprise phone call from the Football Association.

“It really was a dream come true, being asked to take charge of the biggest game in English football.”

He smiled: “I picked up the phone at 10.58am on Tuesday April 8, about a month before the final. A voice said ‘good morning Mr. Probert, or should I say can I speak to the 2014 FA Cup Final referee’? It really was a dream come true, being asked to take charge of the biggest game in English football. As an Island boy I used to watch the whole build-up to the Cup Final on TV, from 9am until it finished, and then go and ‘replay’  it with mates at Ferncliff Gardens in Sandown afterwards, using jumpers as goalposts.”

The appointment realised a lifetime ambition for Lee, 42, who came to the Island from Aylesbury as a five-year-old when his parents moved to Sandown to run a guest house. Stepping out at Wembley in front of 89,345 spectators, and being watch on TV by hundreds of millions worldwide, was a far cry from the days when Lee took charge of schoolboy games on the Island.

He attended Sandham Middle School and then Sandown High School, and like virtually every youngster he loved playing football, although he admits: “I wasn’t that good. Funnily enough after refereeing the FA Cup final I received a message from my old master at Sandown High School saying ‘we knew you would succeed at refereeing because your footballing skills were never the best’. But I loved all sports, and never ever thought of becoming a referee. It was the last thing I wanted to do.” 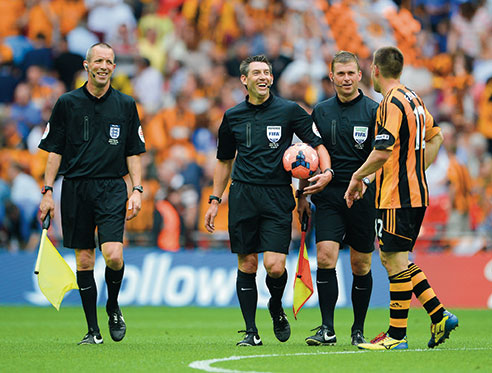 But eventually that was the route he took, passing his initial refereeing exam, and officiating schoolboy matches on Saturday mornings. He said: “One day my sports teacher asked me what lessons I had that afternoon, and I told him ‘double French’. He said we were going off to Cowes High School for a game which he wanted me to referee,  adding ‘forget about double French, you will never be any good at French, but you might have a chance as a referee’.”

Although youngsters had to be 16 to take their first referee’s exam, Lee took his at 15 because his family were going on holiday to Spain when he was due to sit it. When he returned he was told he had passed, and as soon as he was 16 he was out every weekend around Lake, Binstead and Newchurch, often refereeing two games on a Saturday and two more on a Sunday.

He said: “My mum and dad were taking me all over the place to referee games. My first senior game was Niton Reserves, and I wasn’t even old enough. The Island referees’ secretary asked me to do it, saying it wasn’t official but telling me to ask mum and dad to just drive past the Niton ground; the players knew I would be coming. I jumped out of the car, got changed and took charge of the game. The pitch had the biggest slope in the world – it was all right running down it, but never easy to get back up it.”

Lee kept a written record of all the games he officiated, and as a youngster he also wrote in the book: ‘Arsenal v Liverpool, Barclays League Division One (one day)!’

“Of course I had ambitions, but you never really know what you are going to achieve, and how you are going to do it,” he smiled. “After refereeing Island games, I was lucky enough to be asked to referee in the Hampshire League, then in the Southern League aged just 21 – one of the youngest ever referees. I remember being asked how I would get the respect of the players, being so young, and I said ‘as long as I get my decisions right I am sure they won’t worry about how old I am’.” 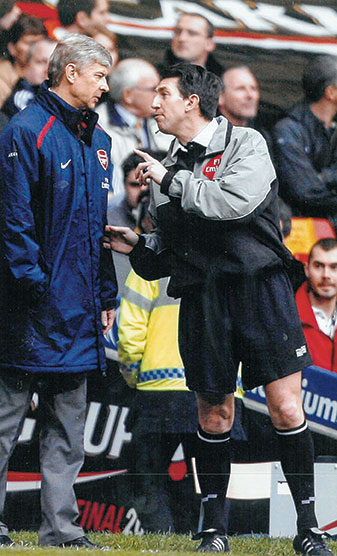 After leaving school Lee worked for a family-run gift shop business on the Island, before he and his late father started a window cleaning company. Lee later moved to Bridgewater in Somerset, working for an agricultural firm, and then on to Bristol before refereeing commitments prompted him to become self-employed, setting up another cleaning company in Bath. However, he says: “I have always regarded the Isle of Wight as home, and I still call it home.”

He continued his refereeing ascendancy in the Conference League before being appointed a Football League linesman for a game at Exeter City. He was then asked to take charge of his first Football League game in 2003 – Northampton Town v Torquay when the temperature on the pitch that August afternoon reached 106 degrees F.

Lee continued to impress at Football League level, and in 2007 he was invited to step up to Premier League level. He said: “There is no better feeling than being asked to be a referee in the biggest league in the world, and getting the best seat in the house. My first Premier League game was Derby County v Birmingham City, and in my office I still have a picture of me officiating during that game, which was given to me by a friend as a wedding present.”

Lee has now officiated 138 Premier League games, and as well as the FA Cup final dream, he has also refereed in Europe, only recently returning from a game in Poland. He said: “There have been some ups and downs, but I have enjoyed every one of them. And  there is no better feeling than walking out to take charge of a Premier League match. If any youngster decides he or she wants to become a referee, it is a great opportunity to succeed, with so many societies and avenues to help you along the way and move forward.” 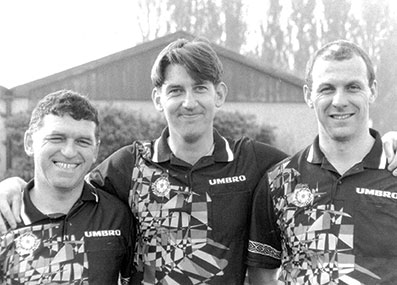 Surprisingly, the FA Cup final was not his first Wembley appearance. He refereed the FA Trophy final for non-league clubs, between Barrow and Stevenage Borough in 2010, and was fourth official for the FA Cup final in 2011, between Manchester City and Stoke City, before stepping on to the ultimate stage in May of this year. He said: “There is something very special about Wembley. My mum was in the Royal Box with my wife Melanie, and all my close friends were there as well watching. It was superb.”

Lee admits: “You never stop learning in this game. If you make a mistake at lower levels it rarely gets noticed. But in the Premier League every decision is scrutinised by 27 TV cameras at every ground, and every angle is covered. As a referee you only have one angle and one look, so of course there is a lot of pressure.

“But thankfully nine times out of 10 we get it right, and although everyone makes mistakes, every time we go out to referee we strive to be the best we can. At the end of the day if you can get players and managers to work with you it makes the job a lot easier.”

With Lee about to start a new season, he said: “There are a few more ambitions left, and I want to continue refereeing as long as I can. When the time is right I hope to go on my terms, but when that will be, who knows?”