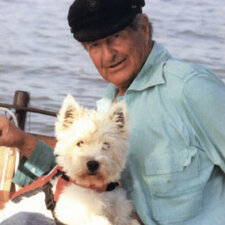 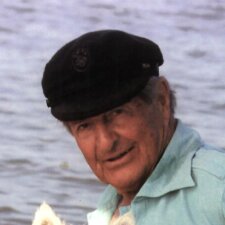 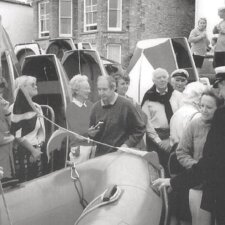 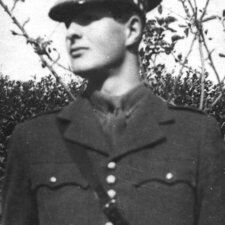 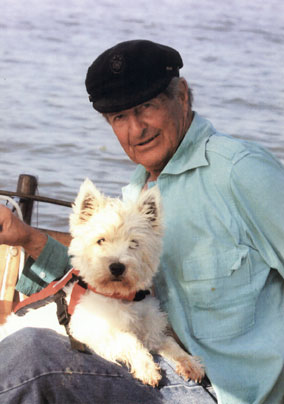 Not too many people have danced with the Queen at Buckingham Palace; taken tea countless times with renowned playwright Noel Coward and even shared a birthday party with James Bond creator Ian Fleming.

But those are just some of the memories of Paul Methuen, who was born in Seaview, and is still a regular visitor to the Island as he approaches his 90th birthday.

In a remarkable life, Paul has worked in India and the West Indies, and has lived in Scotland for the past 25 years. But the Island has remained close to his heart, as he revealed when I caught up with him on one of his recent visits.

Having been born here, Paul moved away because his father was in the Army. But the family maintained close ties with the Island and had a house here until recently. He grew up with his grandparents near Epsom while his mother and family were in foreign parts. After leaving school in 1942 he went into the Scots Guards for six years, but was wounded during Second World War conflict at Anzio in Italy. He returned to London to convalesce and when he was fit enough he undertook Royal duties at Wellington Barracks, Bird Cage Walk, London.

He recalls: “King George VI was on the throne at the time, and because I was in charge of changing of the Guard I often found myself sleeping at Buckingham Palace. I went to a lot of parties at the Palace as well. There were often dances there because the girls (Princess Elizabeth, later to become the Queen, and her sister Princess Margaret) were growing up at the time.
“At all the dances they played the modern tunes of the time, and one of them was ‘Hands, Knees and Bumps A Daisy’. I once ended up opposite Queen Mary, and I felt a bit embarrassed having to bump bottoms with her. So she just smiled and said ‘shall we just clap our hands?

“I also danced a lot with Princess Elizabeth and Princess Margaret, and as the war had just finished there was a lot of entertainment, because the King thought his girls should have a bit of fun after some miserable war years.”

Just before the war ended Paul had a fortunate escape when a German V-1 bomb destroyed the Guards Chapel at Wellington Barracks. He said: “It was one Sunday, and I wasn’t on duty that day, but a lot of my friends were killed and it was horrible. I still go the Guards Chapel, but unfortunately these days it is usually for funerals.” 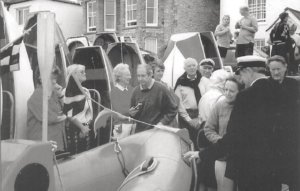 Paul later spent two years in India as Aides-de-Camp to the Governor of Bombay during the time of India’s independence in 1947. Having been keen on sailing since first taking to the water off Seaview as a youngster, he became a member of the Bombay Yacht Club, and won a long-distance sea race, before eventually returning to England the following year.

After leaving the Amy, Paul went to Salisbury Repertory Company, and reckons one of his rare claims to fame was a one-line appearance in Macbeth. He said: “Other than that I was assistant stage manager and that sort of thing.

“I always loved sailing as a boy, and remember nagging my aunt to take me out on the water. I was only five or six and spent all summer holidays here on the Island. Later I sailed a lot during Cowes Week in Mermaids, and I know I won a major cup one year, but I am not sure what it was.”

Paul also sailed across the English Channel in a Dragon class boat from the Island to Le Havre, and said: “My brother and I sailed at the same time in different boats. I was a bit nervous because it was foggy and there were ships’ horns going off all around me. I thought I was going to be run down, but I managed to get there safely.

“It was in 1956, and there weren’t many navigation aids at the time so when I finally landed in France I was about 20 miles off course. I eventually found Le Havre, and linked up with my brother, but he didn’t seem to care that I had gone missing for a while.”

Paul spent some 40 years of his active life in the West Indies, living in Kingston, Jamaica, and working from his office in Montego Bay. While there he helped in the building of three theatres. He said: “Having been on the stage in London, but not very successfully, I moved into the decorating business, and worked for a dear lady who was quite famous at the time. She asked me to go to Jamaica to work with her daughter, and I later became Paul Methuen Ltd. I did very well for many years, decorating homes for the many rich and famous who lived there.”

During his time in Jamaica, Paul became great friends with Noel Coward, often staying at the playwright’s house. He said: “I first met him while it was still trying to make a go of it on the stage, and we had a mutual friend. Noel never came along when I performed because he didn’t believe in semi-amateur dramatics. He was a wonderful character who called everyone ‘darling’. Just the two of us often sat and talked for hours before going down to the beach house for dinner. 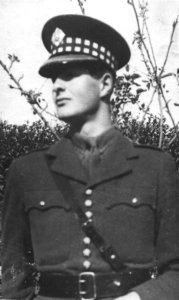 He was a very amusing person, and a keen gardener, as I am. He never talked ‘shop’ but I know he was responsible for me getting my one stage success; a tour with American actress Kay Thompson that took us to Montreal and Florida doing a cabaret act. Noel had a house called Firefly at Cape Wrath, where he is buried. I have a photograph of him which I took just 10 days before he died.”

Paul also shared a birthday party once with Bond creator Ian Fleming, smiling: “It was rotten really because he got all the presents and I got nothing. He lived very close to Noel, and I got to know him, although I wouldn’t say he was a great friend.”

Paul continued to enjoy his sailing in the Caribbean having taken his prized Dragon boat out there strapped to the deck of a banana boat. He recalls how he sat in the yacht for the unloading, telling the banana boat crew ‘if you drop her you will kill me as well as damage it’. It was unloaded safely!

He returned to Britain in 1988, settling in Scotland. But he makes the pilgrimage back to the Island every year to spend the whole of August here, ensuring his annual trip to Cowes week.

Paul has been a member of the Royal Yacht Squadron for 40 years, and is a senior member of the Seaview Yacht Club, having joined in 1937. He was still sailing off Seaview until he was 87, saying: “I stopped when I decided I couldn’t get from one side of the boat to the other. But when I am in Seaview I still like to sit out and watch the dinghy racing. I love the Island and always look forward to coming back here.”