Origin of the hovercraft

Origin of the hovercraft 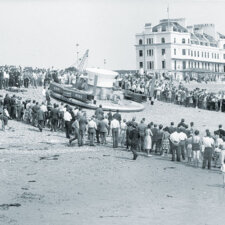 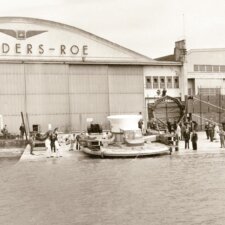 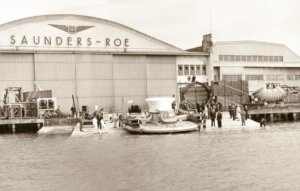 Islanders are so accustomed to seeing hovercraft skimming back and forth across the Solent, that it’s difficult to imagine life without them.

But, had it not been for the ingenuity and persistence of Sir Christopher Cockerell – and his slightly eccentric experiments using a vacuum cleaner and two tin cans – this familiar mode of transport would never have got off the ground.

Cockerell, who had a small boat hire company in Norfolk in the 1950s, was desperate to find a way of making craft go faster. Having looked at earlier work by John Thorneycroft and Sons, in which a small vessel had been partially raised out of the water by a small engine, he reckoned that if an entire craft could be lifted out of the water, it would have no drag, and could reach a higher speed.

His theory was that instead of just pumping air under the craft, as Thornycroft had, it could be channelled to form a narrow jet around the perimeter of the craft to create a momentum curtain – literally, a wall of moving air.

Like many brilliant inventions, though, this one took belief and staying power. Neither the aircraft nor the shipbuilding industries showed any interest in developing the idea, as they saw it as outside their core business.

In fact, Cockerell was even forced to sell personal possessions just to continue financing his research. By 1955 he had built a working model from balsa wood and filed his first patent for the hovercraft.

A breakthrough finally came when he approached the Government about possible defence applications for the craft. This led to it being placed on the government’s secret list (which stopped Cockerell from making it public), where it remained classified until 1958. 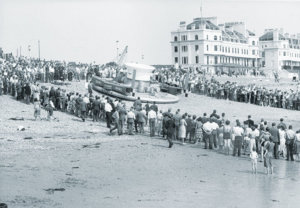 After it was declassified, he was introduced to the National Research Development Corporation, which finally placed an order in the autumn of that year with Saunders-Roe, for the first full-scale hovercraft.

This prototype craft was designated the SR-N1 (Saunders-Roe – Nautical One) and was manufactured under licence from the NRDC.

By June the following year, 1959 the SR-N1 – which could carry four men at a speed of 28 miles per hour – was unveiled to the press and public. Powered by an Alvis Leonides radial piston engine that drove a lift fan, it used the ducted air for propulsion, and demonstrated its capability to cross both land and water.

Within weeks, it was shipped to France and successfully crossed the English Channel between Calais and Dover in just over two hours on July 25 1959 – exactly 50 years to the day after the historic crossing by Bleriot.

Cockerell, meanwhile, had been appointed Technical Director of Hovercraft Development Limited, a subsidiary of the NRDC.  The company controlled the patents, which it used to license several private sector firms to manufacture craft under the registered trademark of Hovercraft.

In later life, Cockerell developed many other improvements to the hovercraft and attended many hovercraft related events until his death in 1999, aged 88.

And as for his original SR-N1? It is kept by The Science Museum at Wroughton, Wiltshire, along with other ground-breaking inventions such as MRI scanners, early computers and de-activated nuclear missiles.