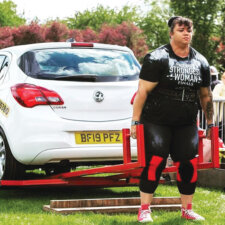 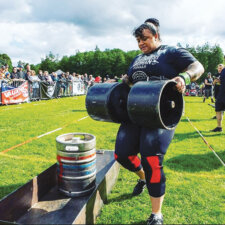 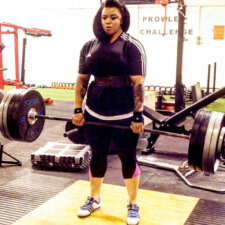 Lifting giant barbells and huge axles is no problem for Island strongwoman Natalie Mawudoku, but the up-and-coming young weightlifter faces a much tougher challenge: raising the cash for the specialist training equipment she needs to help her achieve her dream of a world title.

She came away from the all-England contest in Lichfield on May 27 with a respectable fourth placing in what was a very close-run finish – but for Natalie, a world title hopeful, the result was clearly still frustrating.

“It didn’t go as well as I hoped” she admitted, “but our points were all so close that there wasn’t a lot in it.”

However, she’s adamant that with the right training equipment, she could be bringing home the titles for the Isle of Wight.

“Those other competititors are no stronger than me – they just get to train on the right equipment” she says.

“At Lichfield I was doing things I can’t practice with, like the Yoke, the Farmer’s Sled and the Duck Walk, so I need that equipment to progress, and the only way of doing that at the moment is travelling to the mainland every week.”

Instead, she and her coach Jason Geldenhauys at the In-Shape gym in Cowes have to be extra creative and improvise with weights and various bits of kit to try and train for competition challenges like the Yoke, which involves a 30-metre run under back-straining 220 kilo weights. 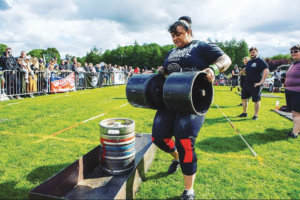 “We’re getting good at finding ways to do the training” she says, “but it’s never going to be as good as using the right specialist equipment, and we just don’t have enough of it on the Isle of Wight”.

Despite the obstacles, though, Natalie has made incredible progress on the competition circuit in a relatively short space of time.

In fact it was at her very first outing to a ‘strongest woman’ event in 2017 that she won the Sussex title – and then followed it up last year by winning Isle of Wight Strongest Woman.

So what made her want to compete in such a gruelling arena?

It was always pretty clear that Natalie was headed for a future in sport. A super-energetic child who came from a whole family of sporty people, she thrived from a young age on any kind of physical challenge.

Even as a pupil at the old Nodehill Middle School, she had thrown herself into every sport on offer at its multi-skill academy, and  showed such ability that by the time she was in Year 8, she was already being sent off to the High School to coach older pupils.

She also proved herself as a footballer, playing for Newport FC and Shanklin Ladies team, and being invited to go for trials with Saints in Southampton.

“I was only really good at two subjects at school” she laughs, “history and sport – so I didn’t have to think for long about what I wanted to do when I grew up!”

In fact, Natalie was still in the sixth form at Carisbrooke High School when she did her two-year  personal trainer course, having already gained a BTech in sport. 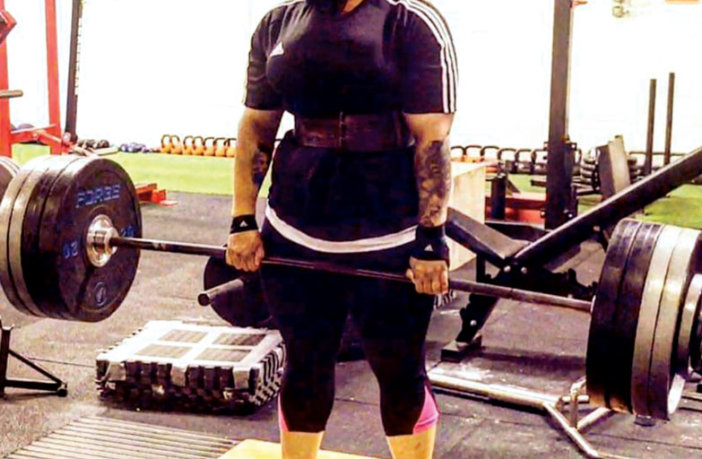 Her plan was to be a personal trainer – but says she was put off by the fact that “there was no money in it”, which is why she ended up working as a waitress until she was old enough to join the demanding world of the prison service, which she did in 2015, at the age of 22.

“I like a challenge” she says, “I’m also pretty good at working with people, and I had always wanted to find out why some people turn to crime”.

Now she works in the prisoner workshop and credits the job with having made her “grow up quite quickly”.

It helps that she’s clearly so physically strong, but she says:  “It’s an environment where you need to be mentally strong as well, so you can detach and not take issues home with you”.

As for her involvement in weightlifting, well, that came about almost by chance.  After battling for some time with a hormonal condition that made her put on weight, she decided she wanted to get fit again, and joined the gym for that reason.

It wasn’t long before several coaches remarked on how strong she was, and after just 18 months of what she describes as ‘casual weightlifiting’, she entered and won the Sussex strongwoman title.

“I did it just for the experience so I hadn’t prepared for it at all” she says.  “It made me think, ‘maybe I’ve got a bit of talent for this’..”

And since then, she’s been putting in the hours, not to mention the blood, sweat and tears, with two hours of training, five days a week after her full working day.

“It is quite hard” she says, “and there are definitely days when I’d rather just go home and sit on the sofa!”

“And then I have my mum saying, ‘oooohh, watch your joints!’ ”

Natalie reckons she has a high pain threshold, which is just as well since she’s suffered everything from tendonitis to a back injury and a tear in her wrist.

Her biggest supporter and cheerleader is her fiance Dominic, a bodybuilder, who she says gives her constant encouragement and who “understands and keeps me going”.

At the prison, there’s also been plenty of interest and support as she’s progressed on the competition circuit, and she’s been given help with the cost of travelling to events.  In-shape Gym owner Steve Dyson and manager Kym Backshall have sponsored Natalie as well, also helping with travelling costs.

Natalie’s next big challenge will be the Britain’s Strongest Woman event in August, and in the meantime, she’s hoping to raise £1,000 for specialist equipment through the Go Fund website:https://www.gofundme.com/manage/england039s-strongest-woman-equipment-funding.