Home|Interviews|David Wood: Monkeying around
Previous Next 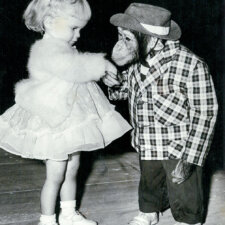 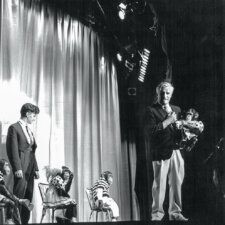 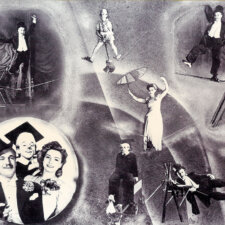 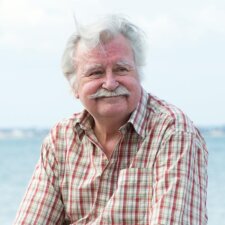 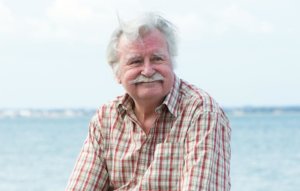 Island magistrate and former RAF man David Wood would have had a completely different life, if he had chosen to go along with his father’s plans for him

For his dad was a larger-than-life circus performer and producer who went by the name of Gene Detroy – and enjoyed huge success in the States with his performing chimpanzee act.

We caught up with David at his home in Ryde to find out more about his colourful heritage.

Leafing through old photographs of his parents makes it clear what a different world they lived in.

His mum Cynthia was a teenage usherette at the Hackney Empire when she met Samuel Wood, the man from the tightrope act – who would later become her husband, and David’s father.

Samuel was part of a circus family hailing from Stockport, Manchester, and was already making his name, not to mention good money – his £138 a week in 1944 was pretty much the equivalent of today’s footballer’s pay!

He saw little need for school, and never went to a single class until he was 12 – and that was only for two years, to learn the basics of reading and writing.

So it’s no surprise that son David was hardly encouraged to do well at school, because his dad simply saw him following into the ‘family business’ in nightclubs.

As a producer as well as a performer, Samuel was always on the lookout for the next big thing – and that was what led him to explore the idea of working with animals.

He tried training small Rhesus monkeys to begin with, and when that proved futile, he progressed to baboons and then ultimately, chimpanzees, whose intelligence made them more amenable to being trained.

His first chimp was Marquis, who was successfully trained to roller skate, ride a bicycle, and then more challengingly, a high unicycle.

Samuel knew he had hit on a winning act, and from that point he took on the name of Gene Detroy and the Marquis Chimps, working with a group of four animals.

By the mid-1950s, David became acutely aware of the difference between his lifestyle and that of his school friends.

By this time, his dad had been invited to work in Las Vegas with the act, and David discovered that while his father was pulling in £500 a week, his friends’ fathers were earning less than a tenth of that in their regular jobs.

It was always clear that Samuel expected him to follow in his footsteps, and from the age of 15, David was helping out as a props assistant in the act – which by then included ice skating shows at Wembley arena.

“I was still only 15 when dad said he had a job for me in America” he recalls. “I told him I needed to stay on at school to get my GCEs, but his reply was ‘You don’t need those to work with chimps’. He just didn’t see the need for schooling, I guess he saw himself as a self-made man”.

So off David went to the US, where he spent an eventful three years working as part of the back-up team for Gene Detroy and the increasingly famous Marquis Chimps.

In 1960, the chimps were booked by Brooke Bond Foods to do a series of TV commercials for Red Rose Tea – including a memorable one in which they performed as a swinging jazz band.

David’s duties include
d helping in the training, along with assistant Norman, who worked for his father for over 30 years.

It seems Samuel was as tough as a boss as he was as a father.

“Sometimes I’d go and ask Norman how to do something and was told by my dad:  ‘Don’t ask the hired help – learn it yourself, the way I had to’.

David also recalls the hair-raising experience of being told by his father to transport eight chimps right across America in an articulated lorry.

“I was only 17 and we’d just finished a gig in the Latin quarter of New York,” he says. “We had another booking in Hollywood four days later, and because my dad had something else to do, I was left in charge of an articulated truck and eight chimps to drive right across the US in four days”.
To help the teenage driver keep awake, his dad helpfully gave him some pills, which David later suspected to have been amphetamines.  “Apart from short stops to feed the chimps, I only stopped once, in Texas,” he says.
Not surprisingly, once he reached his destination he promptly slept for 24 hours, totally missing the show.

What with white-knuckle experiences like that, and being bitten by the chimps more than once during training, it’s hardly surprising that David didn’t fancy following in his father’s footsteps.

lough his own furrow onto the stage.

In fact he had even secured himself a booking at the Thunderbird Hotel in Las Vegas, where he met legendary comedian George Burns.

“My father put a stop to that,” he says.  “He cancelled my booking and said I was going with him.  I think he just wanted to hand the business on to me, but it really wasn’t for me”.

The final break from show business came for David in 1966, right after a gig at the Winter Gardens in Blackpool, when they were second on the bill to Ken Dodd.

“We had a booking with the act for Expo 67 in Montreal the following year, but I knew I’d had enough,” he says.   “I told my dad I was leaving and joining the RAF, and I never looked back”.

Later years
Whilst David went on to build his career as an airman, with 25 years in the RAF, his dad continued successfully with the act in the States, living in Las Vegas and appearing on TV shows, adverts and promotions with the chimps.

He also worked with the actor Ronald Reagan (later to become US President) in 1951, on the movie Bedtime for Bonzo, which featured a chimp in a starring role.

Reagan was fascinated by the training of the chimps, and wanted to know what were the little ‘treats’ that they were given.

They were actually jellybeans – which Reagan ended up acquiring a taste for himself during filming. In later years, he always had a dish of jellybeans on his desk – even at the White House.

Samuel finally retired in the early 1980s, and died in 1986 whilst David was stationed in Cyprus.He died somewhat poignantly whilst fly-tipping an old armchair, and had a heart attack lifting it off a wheelbarrow, his body being found later in the day by a workman.

“He was always a very tight-fisted person and it’s sad really to think that that led to his death” says David. “He had no need to fly tip because I later found out that the local authority would have taken stuff away for him free”

He was given a colourful send-off by his family though, with a cremation at Las Vegas’ Henderson Crematorium, which was featured in the closing scenes of the film ‘Ocean’s Eleven.’

David then took the ashes to Samuel’s favourite watering hole, a seedy truck driver haunt called the Dandelion Bar, where he bought the old man’s favourite tipple, a rum and coke.

Then David flew the ashes back to the UK in an RAF VC10 and the family took them back to his native Stockport where they were finally interred at the town’s St George’s Church.

“His life certainly made an impression” said David, “and as I’ve got older I think I understand a bit more why he could be so difficult”.

As for David, he retired from the RAF in 1991 and decided to move to the Isle of Wight, which he came to know during his years as a keen sailor – and now regards very much as home.

When he first moved here, he ran a chartered fishing boat for 12 people, but these days, apart from his magisterial duties – he’s served on the Bench since 2003 – he enjoys his retirement fully.

It certainly makes those days of driving chimps across the United States a very distant memory.